Giuliani joins reps. from both sides of the aisle to protest performance, says work 'truly romanticizes the terrorists.'

NEW YORK - Politicians including former New York Mayor Rudolph Giuliani joined a crowd of demonstrators outside the Metropolitan Opera on Monday as part of an ongoing protest over an opera based on the murder of Leon Klinghoffer, an elderly disabled American Jew shot dead on a hijacked cruise ship by Palestinian terrorists and dumped overboard still in his wheelchair.

The 69-year-old Klinghoffer was on the Achille Lauro, an Italian cruise ship, when it was hijacked by four members of the Palestine Liberation Front in 1985. Critics say the opera glorifies his Palestinian killers.

About 400 people stood behind barricades chanting "Shame on the Met!" and carrying signs reading "The Met glorifies terrorism" before the company's first performance of "The Death of Klinghoffer."

American composer John Adams' opera has been a lightning rod since February, when it was first scheduled for this season. The first large demonstration came on the Met's Sept. 22 season opening night, featuring a Mozart work, when protesters jeered at arriving spectators. Giuliani, standing across the street from Lincoln Center on Monday, said he wanted to warn people that the Klinghoffer opera "is a distorted work."

"If you listen, you will see that the emotional context of the opera truly romanticizes the terrorists," he said. "... And romanticizing terrorism has only made it a greater threat."

Among the politicians taking part in the protest were US Reps. Carolyn Maloney, a Democrat, and Peter King, a Republican. But opera expert Fred Plotkin said Adams depicts the Klinghoffers as his work's moral spine. "Does this opera present the killers in a favorable light? No," Plotkin said. "Are the Klinghoffers far and away the most sympathetic characters in the opera, the ones we care about most? I believe so." Monday's performance went on with a few orchestrated disruptions: Boos were shouted from scattered seats, and a voice kept yelling from a balcony, "The murder of Klinghoffer will never be forgotten!" The evening ended with a standing ovation that drowned out any heckling. 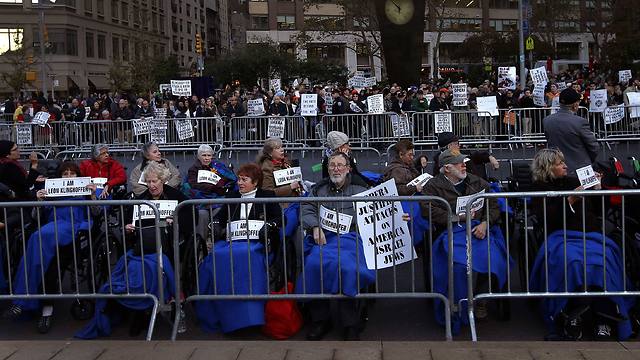 Photo: Reuters
Earlier in the day, a rabbi led Jewish teens in a prayer vigil. Youths sat at their makeshift prayer spot opposite the Met, discussing Hebrew scriptures in shifts of about a dozen throughout the afternoon. "We're here because the Met is glorifying the killing of a Jew, and we must speak out -- we're the next generation," said Shabbos Kestenbaum, 15. A placard read: "We pray for Leon Klinghoffer's soul." Rabbi Avi Weiss said the music "extols" the terrorists, beginning with the "Chorus of Exiled Palestinians," while the Klinghoffers come off as shallow, money-conscious characters whose first words are, "I've got no money left. I gave all my money for the taxi." "The language is explosive. It's radioactive. It's dangerous," the rabbi said. "It inspires violence." The Met canceled the international movie theater and radio broadcasts of the opera in November amid pressure from Jewish groups, especially the New York-based Anti-Defamation League. Met general manager Peter Gelb, who's Jewish, said the decision was made "as a compromise gesture." But the Met issued a statement saying "the fact that 'Klinghoffer' grapples with the complexities of an unconscionable real-life act of violence does not mean it should not be performed. ... 'Klinghoffer' is neither anti-Semitic nor does it glorify terrorism." The Met said it would not "bow to this pressure" that the performance be canceled.

The Klinghoffers' daughters, Lisa and Ilsa Klinghoffer, issued a statement through the Anti-Defamation League that will be included in the Met program. It says they believe the arts "can play a critical role in examining and understanding significant world events. 'The Death of Klinghoffer' does no such thing. It presents false moral equivalencies without context, and offers no real insight into the historical reality and the senseless murder of an American Jew." 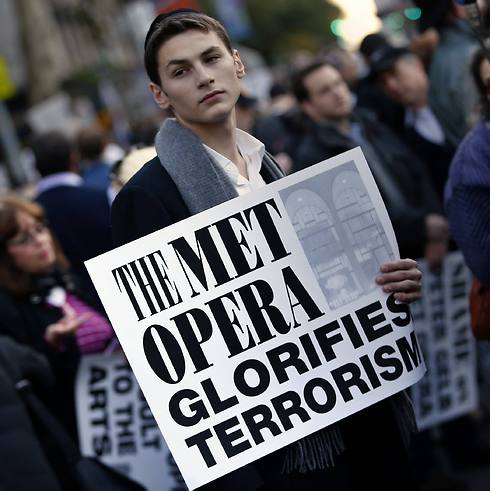 Photo: Reuters
Plotkin noted many "Klinghoffer" opponents, including Weiss, have never seen it performed live. Weiss said he has read the libretto. Advertising for the opera comes with the slogan: "See it. Then decide." "The Death of Klinghoffer" premiered in Brussels in 1991, with little controversy, then in various European cities and at the Brooklyn Academy of Music, where it was greeted with praise and anger. Mayor Bill de Blasio, who hasn't seen the opera, said the rights of cultural institutions to put on works of art have to be respected. "We don't have to agree with what's in the exhibit, but we agree with the right of the artist and the cultural institution to put that forward to the public," he said. De Blasio added anti-Semitism "is a serious problem today in the world that has nothing to do with this opera."