From sanctions to veto: The US has plenty of ways to punish Israel

Analysis: Clash between Obama and Netanyahu could have devastating ramifications for Israel: From postponed arms shipments, to international isolation and even a possible shift regarding Israel's alleged nuclear program.

"The thing about Bibi is, he’s a chickenshit … recalcitrant, myopic, reactionary, obtuse, blustering, pompous, and 'Aspergery'." These most undiplomatic epithets were fired at Prime Minister Benjamin Netanyahu by an unnamed US official in a fiery article published by Jeffrey Goldberg in The Atlantic. But this is only the apex of a lengthy conflict between Washington and Jerusalem that has been long in the making and could have devastating implications for Israel.

The most dangerous weapon in the Obama administration's arsenal is that ability to rebrand Israel as a partisan actor, undermining Israel's neutral support across the aisle. Israel enjoys a unique status in the American political discourse; it was an issue which enjoyed across the board support by both Democrats and Republicans. Anyone entering the White House was by default committed to supporting Israel by virtue of the unbreakable bond between the two nations, because Israel enjoys wide reaching popular support. 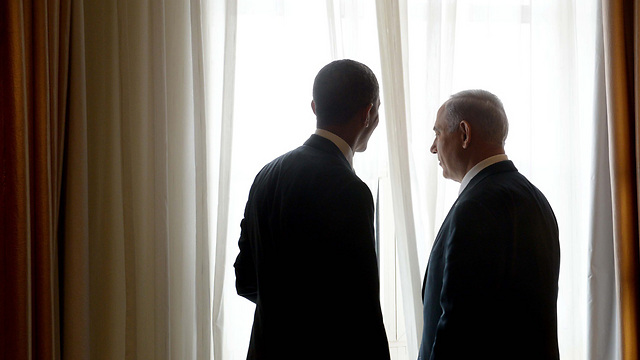 Nowadays, that is being eroded; Obama can portray Israel and its prime minister as part of the Republican Party, an active player in the divisive politics polarizing American society. Netanyahu's actions and statements allow Obama and his affiliates, in a string of well-planned press leaks, to treat Israel as part of the Republicans' more conservative flank. Thus, the administration also succeeds in pushing Israel into a position which is antagonistic to most Hispanic and African American voters.

Becoming a "side" in American politics is the worst possible damage Netanyahu could inflict on Israel and its citizens in the long run. But it is not the only damage it could result from the dust up between DC and Jerusalem. As Ynet discovered during Defense Minister Moshe Ya'alon's visit to the US, when his requests to meet top administration officials were denied in possible retribution for comments he made in the past regarding Kerry's 'obsessive and messianic' disposition toward the peace process.

In the field of security, the US has a strong and unwavering commitment to Israel. This is a longstanding commitment which to no small extent stems from American interests, now even more so. Thus it is safe to assume that the Obama administration, despite its anger, will continue to arm Israel, share intelligence and technological information, and still take part in defense establishment initiatives.

But Obama, like Jimmy Carter and Bush senior before him, can postpone the transfer of arms and funds, an additional tool he can use to pressure Israel by delaying programs like the Magic Wand anti-missile system - something that could cause real damage to Israel, which would not be prepared should Hezbollah launch an offensive.

Lack of coordination between the US and Israel in the fields of intelligence and cyber threats – were it not intimate already – could harm Israel's ability to address the threats it faces in the Mideast, when it really counts. Delays are the main weapon the American defense establishment has against Israel and, as past experience has shown, its potential damage is real.

The last time such a delay took place - during this summer's Operation Protective Edge – was of Hellfire missiles. They were not desperately needed for the fighting in Gaza, but the very fact that such a threat was implemented while Israel was in the midst of a military conflict was a not so subtle hint from the White House of what the administration can do.

Israel could also pay a heavy price for the deterioration of its ties with the US in the international arena. It is unlikely that the US, because of its anger at Netanyahu, would completely cut its diplomatic support for Israel in international institutions – namely, the UN. But the US could chose to act "by the book" – support only what dovetails with American interests and policy and not veto every anti-Israel initiative put forward once Israel does not follow that policy or even acts against it.

In such a scenario, any construction beyond the Green Line, regardless of whether it is in Jerusalem or the West Bank, could mean the US would allow Palestinian President Mahmoud Abbas and the Arab nations to attack Israel, portray it as pariah state, and even permit the introductions of sanctions against it. The US is unlikely to let Israel face sanctions in the way South Africa did, but it could permit "soft sanctions", which deal more harm to Israel's image and create collateral economic damage.

In the diplomatic arena, the White House is already pushing the EU and certain Asian nations to toughen their stance on Israel, and try to push it into greater international isolation. It is safe to assume that German Chancellor Angela Merkel, British Prime Minister David Cameron and French President François Hollande have come under the influence this new sentiment. This is especially damaging at a time like this, in which the world is holding critical negotiations with Iran over its nuclear military program.

The Europeans and American are in cahoots in this regards, and any declaration of Israel as an international law violator due to settlement construction could permit the US to further shut its protective diplomatic umbrella that protects Israel on the nuclear question. So far, for example, the US has blocked attempts for a nuclear nonproliferation conference in the Mideast – despite the fact that it is in fact Obama's policy to clean the Mideast of nuclear arms. Obama has two years left in the White House, which is more than enough time to change his policy on Israel's alleged nuclear program without fearing it would harm his future political chances.

Others have mentioned the threat of Israel facing charges at the International Criminal Court (ICC) in The Hague, which have also been thwarted by the US.

All of the aforementioned measures have been taken to varying extents by past presidents, when Israel acted out of line or even in provocation of openly stated US policy.

On the basis of past experience, it can be said that Obama's White House and John Kerry's State Department will not turn on Israel with force, but with numerous small jabs that will sting and cause real damage to Israel's international standing and image as a state that once enjoyed full and unwavering US support, thus harming Israel's deterrence.