How to prevent a religious war in the Middle East

Analysis: In wake of attempted assassination of Yehuda Glick, Palestinians are closer than ever to a direct confrontation – and it may be worse than a third Intifada. There are steps that need to be taken to keep tensions from boiling over any further.

The worst-case scenario is happening before our eyes. The "Jerusalem Intifada" has turned into a religious war between Jews and Muslims. This religious war, at its heart the Temple Mount, has the potential of becoming a widespread conflict that will drag in not only the residents of Jerusalem, the West Bank, the citizens of Israel and Gaza – but also Hezbollah, Jordan and other states in the region.

A religious conflict at this time has the potential to change the direction of the so-called "shaking off", or Arab Spring, and turn them against us. A tidal wave of clashes over the Temple Mount and Jerusalem could change the rules of the game during the rising tide of Islamic extremism currently sweeping through the Middle East, as well as Europe and North America.

The significance of swinging the pendulum of the conflict towards us is fairly clear. It may be expressed in terrorist attacks against Israeli targets abroad and rocket fire from Sinai, as well as suicide bombings in various locations. If we don’t stop the process that is taking place right before our eyes, we may find ourselves, due to the volatile situation in the Middle East, in the middle of a conflict far more destructive than a third intifada. 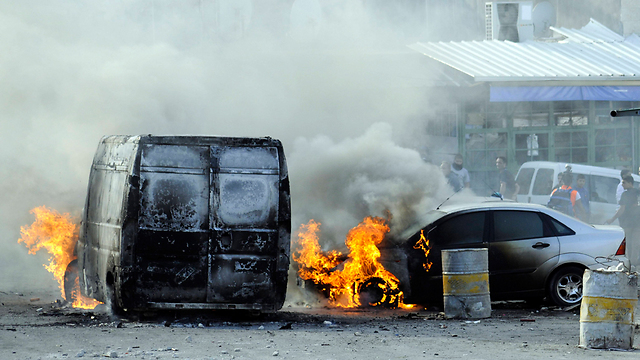 While these claims seem like dark prophecies and scare-mongering, it is important to note that similar predictions were made before the 1973 Yom Kippur War and the Second Intifada, which began, if memory serves, with Ariel Sharon's 2000 visit to the Temple Mount (and was dubbed the Al-Aqsa Intifada).

Which steps need to be taken in order to stop the escalation? Several measures must be implemented immediately: * The IDF must bolster the Jerusalem police presence, and the Central Command should prepare and work towards the prevention of nationalist crimes, committed not only by Palestinians but by Jews as well.

Yehuda Glick, who was critically wounded on Wednesday, is a citizen of Otniel in the southern West Bank, but considering the growing positive sentiment towards him on the part of the right-wing, the Shin Bet, police and IDF need at all costs to deter hate crimes and religious attacks – otherwise known as "price tag" attacks. Equally, security forces must prepare for the possibility of Palestinian terror attacks, including mass stone-throwing, Molotov cocktail attacks and bombings as well as shootings at Israeli cars on the roads.

* Preventive arrests must be made among Jewish and Arab extremists. Do not be deterred. These extremists are pyromaniacs who have so far been treated leniently – a recipe for a great conflagration. The matches must be taken out of the hands of these pyromaniacs.

An example of the above step is what should have been done to the terrorist who wounded Glick on Wednesday. The fact that the Shin Bet managed to locate Muataz Hijazi so quickly shows both that he has been targeted for a long time and also that it was clear he was capable of carrying out such an attack. It is also clear that the man, a former prisoner, had been planned something for a while and knew precisely who he was going to hurt. It is safe to assume, therefore, that the Shin Bet knew something was brewing around this man. Hijazi is an example of a potential target for preventive arrests of Palestinians and Jews who are prone to inflame tensions.

* Mobilize politicians and clerics of Jews and Muslims, including Abbas and Netanyahu, called the public and especially religious fervor extremists percent to relax and return to sanity. Dialogue with religious leaders and politicians Palestinians - not only from the leaders of the Jerusalem police but from politicians and Israeli rabbis - may have a calming effect. It has been shown in the past.

* A major injection of police and IDF troops in riot gear and their deployment in larger frameworks in the capital, including West Jerusalem and the West Bank. Their presence must be demonstrable. Troops, less experienced than police officers in dealing with riots, must receive precise and detailed instructions on when to open fire and in the use of riot gear. They must also be provided with the correct equipment.

* And most importantly, to avoid possible killing. Each corpse leads to further deterioration and exacerbates the situation more.

It is likely that if all of these steps, and possibly further measures including night curfews in some areas of Jerusalem and Judea and Samaria, are taken in cooperation between the IDF, the police and the Shin Bet, tempers will subside within a few days and normalcy can be restored. Otherwise, fears of a real regional conflagration will become increasingly tangible.