Racheli Ibenboim. 'The figures speak for themselves'
Photo courtesy of Meir Panim

Are haredi women neglecting their health?

According to position paper presented to Knesset's Committee on the Status of Women, women in ultra-Orthodox sector have less access to medical information and are exposed to more medical risks.

Grim figures about the state of health of ultra-Orthodox women in Israel will be presented Wednesday to the Knesset's Committee on the Status of Women and Gender Equality as part of an initial position paper.

According to the report, most problems have to do with the lack of access to information and regular medical checkups. The data were compiled over a decade and reveal unique issues in the area of fertility and Jewish Law.

The position paper, which was authored by Meoravot, a coalition of haredi women, points to a low rate of visits to physicians' offices, a high frequency of medical conditions (such as overweight), and no access to online medical information due to the communal restrictions on Internet exposure.

"We presented figures which speak for themselves," notes Meoravot member Racheli Ibenboim. "There is a very wide gap here from the starting point: The socioeconomic situation, the age of marriage, the number of children. We understand why it's a problematic situation."

Data compiled by the group reveals that the fertility rate of haredi women is significantly higher than the average, which has a direct effect on their health.

The age of marriage among haredi women is also significantly lower than the average: About one-third of them get married by the age of 19, compared to an average of 24.7 in the State of Israel. The women who marry young, according to a health survey quoted in the position paper, report more health and mental problems. Their birthrate is significantly high too – 6.53 compared to the national average of only 2.07 – and increases the exposure to infertility issues which stem, among other things, from the halachic reality. Haredi couples which encounter a fertility problem postpone the examination of the man's sperm for halachic reasons, while the woman undergoes invasive medical procedures. "Halachic infertility," a situation in which the ovulation day precedes the ritual immersion day, will be solved by prescribing hormones to a perfectly healthy woman. 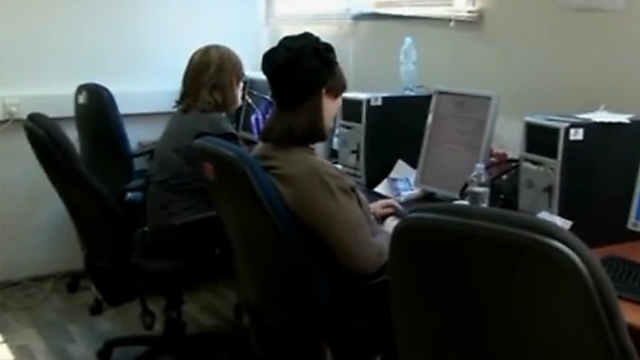 Haredi women. 'Unhealthy and unsupervised lifestyle' (Archive photo: Eli Mandelbaum)
Haredi women are in a disadvantage in pregnancy tests as well. Only 7% of them undergo the triple screen test during their pregnancy compared to 94% of secular women. The document presents a study conducted by Dr. Ronnie Lidor in 2009, which revealed that the higher the number of children in the household, the lower the number of doctor visits. According to the figures presented, families with more than four children, like most haredi families, visit the doctor less than families with one to three children.

No awareness of medical history

The information in the document is also based on figures received from the Bishvilaych organization, which helps promote health awareness among the haredi population.

According to the organization, 58% of haredi women visit a doctor's office only when they are pregnant or when they have a special medical problems. Sixty-five percent of them say their doctor never discussed their medical history with them. This figure join other grave data: Twenty-seven percent of haredi women don't know if they have a medical history of breast cancer in their family, and 47-53% of them have never had a mammogram for early detection of the disease. This leads to a document pointing to a double mortality rate from breast cancer among haredi women compared to the general population. The study reveals that although 63% of the Israeli population collects health information on the Web, the low haredi exposure to the Internet blocks the availability of relevant medical information. According to studies from 2013, the online information is replaced by social and unauthorized sources of information in the community. "Our goal is to bring the knowledge into the community," says Sara Siemiatycki, director of the Bishvilaych association. "Fewer haredi women are diagnosed with breast cancer, but the early detection and awareness of mammography tests is critical. "We promote advanced studies for doctors who work with the haredi community, in order for them to understand that questions about medical history and encouraging women to take this kind of tests are extremely necessary."

The socioeconomic level has a direct impact on the women's health as well. In a society with a poverty rate of 70%, according to the figures presented in the document, there is a low life expectancy and a high infant mortality rate.

According to the findings of a survey conducted by the Geocartography Institute in 2009, haredim are part of a risk group which avoids consuming basic medical services, such as purchasing medications. Conditions related to lack of proper nutrition, like anemia and overweight, could also increase. Ibenboim says she would like to get some answers from the Health Ministry. "The committee's researchers approached the Health Ministry, and according to what they told me, they failed to collect any data," she says. "They didn't receive answers from the Ministry on different issues, and so we turned to other sources to collect the information: Academic papers, databases and associations dealing with the issue. We hardly found any information. Every recorded figure was collected with blood and sweat."

"At the end of the day, it's a social document. We are not doctors. It has enough information for us to realize that there are problems. The question is why isn't there an organized database on the issue, or comparative documents which can provide a clearer picture.

"We want to promote accessibility to medical information among the haredi women together with the ministry. We are talking about life-endangering gaps in knowledge. This is a situation which can be changed with some consideration and attention."

Knesset Member Aliza Lavi of the Yesh Atid faction, chairwoman of the Committee on the Status of Women and Gender Equality, says one of the causes of this situation is that haredi women are not represented in the Knesset.

"In order for them not to be transparent to the legislator, I have brought them to the committee as observers," she says. "We recently received information that the medical condition of haredi women is poor compared to the rest of the population. Due to cultural and social differences, the haredi women are increasingly behind in terms of awareness and nurturing their personal health. These gaps often cause discomfort, negatively affect their quality of live, cause exhaustion, depression, irreversible damage and even unnecessary death which could have been avoided through awareness. "There are solutions. There is a possibility to make the information accessible through specific means of communication, focused education and professional information, and mainly through cooperation to significantly improve the quality of life of women in Israel's haredi community. The Health Ministry offered the following response: "The existing databases in the health system don't include a characterization of the level of religiousness (haredi or non-haredi), and so we can only rely on figures from neighborhoods and communities with a haredi majority. "The Health Ministry is aware of the fact that haredi women are less exposed to content through the Internet, and is working in a variety of ways to reach these women." As an example, the Ministry presents the National Program for Promoting an Active and Healthy Lifestyle, which offers programs for the empowerment of haredi women, trains women from the haredi sector to promote a healthy lifestyle in their families and communities, and empowers volunteers from the community to encourage healthy nutrition and physical activity in the sector. As for mammography tests, Ministry officials say 62.9% of women in haredi neighborhoods have taken the tests compared to 71.7% of the general population.