Ashkelon Mayor Itamar Shimoni announced Wednesday that Arab workers will no longer be allowed on construction sites at kindergartens in the city where shelters are being built, citing the escalating security situation and fear of terrorist attacks. The announcement almost immediately drew fire from MKs, who said it was illegal and racist.

Armed guards will also be posted at kindergartens near construction sites in the southern city, Shimoni said. 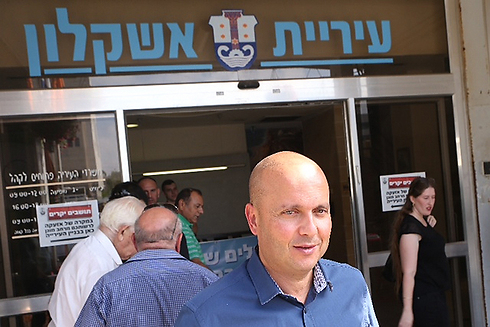 Israel's Equal Opportunities Act states that an employer may not discriminate between employees on grounds of religion, nationality, gender, sexual orientation and more when it comes to hiring, working conditions and so on.

According to Shimoni, however, the decision was made in collaboration with Ashkelon police amnd a donor has agreed to fund the cost of security at the kindergartens.

In a statement on his Facebook page Wednesday, Shimoni wrote: "Despite the fact that the deployment of security guards is the responsibility of the Ministry of Public Security, I decided to place armed guards in each cluster of preschools (40 preschools) close to construction sites employing Arab workers, starting tomorrow morning. Also, in kindergartens that are currently having protected spaces built by Arab workers, that work is suspended until further notice."

Israeli media reported that MK Issawi Frej (Meretz) called on the mayor to reverse the decision.

“Shimoni’s decision to prevent Arab Israelis from working is racism at its worst form," Frej said. “Using a poor excuse of ‘sense of security,’ Shimoni wishes to cleanse Ashkelon of Arabs and anti-contaminate the city with racist anti-Semitism."

He further demanded that officials ”publicly condemn Shimoni and demand that he overturn his decision, along with all of its consequences.”

MK Nachman Shai (Labor) said the order was illegal, and should be immediately rescinded.

“Relations between Jews and Arabs are now being tested, and leaders are commanded to preserve such relations, not tear them apart to the point where it may be impossible to fix them,” he said, according to Israeli media.

MK Ahmad Tibi (Ra’am Ta’al) responded to the mayor on Twitter. “Shouldn’t he be prosecuted for racisim? Remind you of something?” Tibi wrote.

In Jerusalem, where fear was running high in the wake of the terror attack in the city, guards were also stationed at some kindergartens, while others were locked from the inside. Staff members explained that they had been instructed to do so in meetings with municipal officials and security.

Jerusalem police have stepped up security at educational institutions in the city and increased patrols. New directives stipulate that every school has to have a security guard.