Prime Minister Benjamin Netanyahu was forced to attend a Knesset plenum on Wednesday evening, after legislators invoked the "40 signature" rule. While the scheduled debate centered on the cost of living, MKs used the opportunity to challenge the prime minister on the "Jewish nationhood" bill.

Throughout the session, members of Knesset were called to order, with several opposition legislators being directed to leave the plenum by Knesset Chairman Yuli Edelstein.

Netanyahu took to the podium towards the end of the session to defend his decisions on the controversial legislation, officially defining Israel as a Jewish state, and to present the principles of his proposal. "The bill I will present will be based on Israel being a Jewish and democratic state. Israel guarantees equality of personal rights to all its citizens without discrimination based on religion, race, and gender."

Netanyahu said the bill would be brought to a government vote on Sunday. 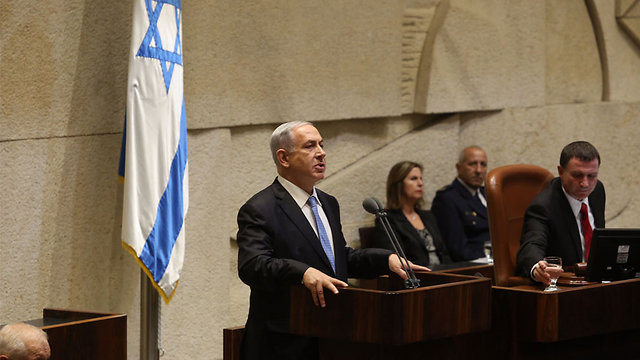 "Now, explain to me why you disagree. Tell me. I want to know," Netanyahu said, as opposition legislators continued to shout their objections.

"Those who praise murderers – calling them martyrs – and incite or commit acts of terror – will not receive national insurance," Netanyahu said.

Opposition Chairman Isaac Herzog (Labor) challenged Netanyahu on several issues during his turn on the podium, going as far as to warn the sitting prime minister that his fragile coalition could dismantle, leaving Labor in a position to poach his supporters.

At the end of the session, 46 MKs supported the prime minister's statement – 35 opposed the motion.