New legislation being put forth by a firebrand Likud Knesset member could force new Israeli legislators to swear loyalty to Israel as a Jewish state before they can join the Knesset ranks; a move which will likely infuriate Arab and leftist MKs.

With neither the wintery weather nor the stormy session on the 'Jewish nationhood' bill yet to pass, the Knesset is gearing up for another contentious debate next Sunday, when the Ministerial Committee for Legislation will discuss the proposal, by MK Miri Regev, which will put into a law the demand that parliamentarians swear allegiance to the Jewish state of Israel. 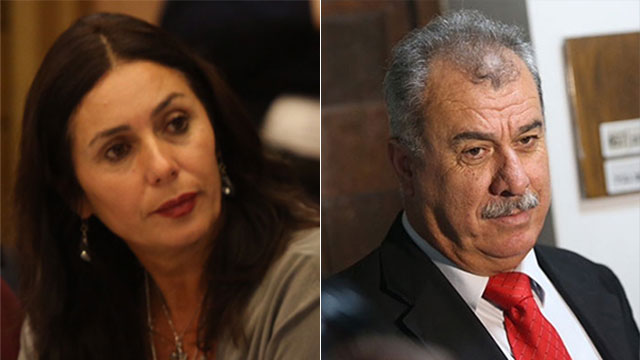 Likud MK Miri Regev / MK Mohammed Baracha (Photo: Gil Yohanan, Motti Kimchi)
According to the new legislation, members of Knesset will be required to "faithfully serve the State of Israel as a Jewish and democratic state and to follow the laws of the state." Until now, new legislators were sworn in vowing to "uphold the principles of the State of Israel and to faithfully fulfill their mission in the Knesset." In her addendums to the proposal, the Likud member noted that the aim of the bill is to set into law the commitment of parliamentarians in Israel. "Every MK who swears allegiance to the Knesset will declare that he recognizes the State of Israel as a Jewish and democratic state." "An oath of allegiance in this formulation will require an MK to have a stronger connection to Israel and to being a citizen like any other citizen of Israel, who has rights and obligations towards the state, its existence and security," said Regev in a thinly veiled reference to Arab MKs' ongoing critics of Israel and its defense forces.

MK Regev has historically taken a hardliner position to what she describes as anti-Israeli activity by MKs, for example Arab MK Hanin Zoabi, who participated in the controversial Mavi Marmar Gaza flotilla, working to strip such MKs of their immunity.

"Such a loyalty oath will require MKs to act within the framework of the law, and as part of their obligations as MKs working for Israel and its citizens, as a Jewish and democratic state, thus preventing MKs from taking action against the state, its institutions and security forces," MK Regev said, in a clearer indictment of Arab MKs.

According to Regev, who did not mention names, some MKs abuse the legal immunity given to members of the Knesset for political purposes. Despite their immunity, Regev claims, "these MKs (need to be) committed to the state of Israel, its laws and institutions, and thus reality forces us to tie between MKs and the state.:

Should the bill - which will most likely inspire anger in the opposition, especially Arab factions - pass, it could force Arab lawmakers to swear allegiance to Israel as a Jewish state.

However, Regev said that should government succeed in passing the contentious Jewish nationhood bill, which will cement Israel's status as a Jewish and democratic nation, the bill could be included.