After donation of ancient manuscript by filmmaker, Haifa University discovers a nearly identical copy written by the same person in Germany in 1667.

When a 350-year-old Hebrew Bible was recently donated to Haifa University, personnel were surprised to find its counterpart – a Hebrew Bible written by the same person – already stored in the library's shelves.

When director and producer Micha Shagrir told Younes and Soraya Nazarian Library administrators that he was interested in donating the ancient Bible, they were pleased at the opportunity to add the rare manuscript to their rare books collection. 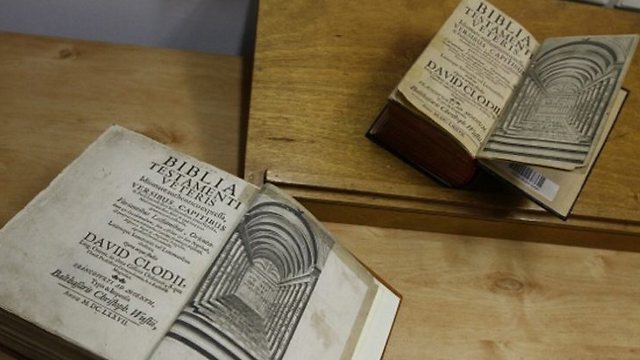 The Bibles are nearly identical, but only one includes margins. (Photo: Haifa University)

They soon discovered that the book had a unique provenance – it was a copy made in Germany in 1667 and was a near-duplicate of a Bible already kept there. The main difference between the two was that the older one was narrower and lacked margins, while the newer book had wide margins containing numerous notes written by hand in Latin. The book made its way from Germany to Israel by chance.

Decades ago, Shagrir was on a trip to Egypt, looking around Cairo's marketplaces, when he happened upon an antique store owned by an Armenian. The vendor was so enthusiastic about Shagrir, who produced a film about the Armenian genocide, that he decided to give him a gift and required that he open it only once he returned to Israel.

When Shagrir got back, he was stunned to find the ancient manuscript in his possession.

35 years after he unwrapped his gift, the book has been reunited with the copy held by the University.