Rabbi Yechiel Eckstein with some of the new immigrants

'As long as the state of Israel exists and as long as there are IDF soldiers who protect us, there won't be any Jewish refugees,' Rabbi Eckstein tells new olim.

Two hundred and twenty-six immigrants, 76 of which are children, landed Monday afternoon in Israel on a special flight from Ukraine.

Last weekend, a large delegation from the IFCJ traveled to Ukraine, along with representatives from the Immigration Absorption Ministry, to accompany the 226 new immigrants who arrived in Israel as part of IFCJ's “Fellowship Aliyah” program. Among the immigrants are dozens of families of refugees from eastern Ukraine who were made destitute as a result of the ongoing fighting, and were forced to leave their homes.

The Jews in the former Soviet Union constitute the largest and poorest Jewish community in the world. The fall of the Soviet regime and the sharp transition to capitalism left entire populations without a social safety net and adequate welfare institutions. For example, elderly citizens receive pensions that amount to less than $200 per month.

"Up until last year, the Jewish community in the Ukrainian city of Donetsk was large, prosperous and consisted of over 15,000 Jews," says Donetsk's chief rabbi and Chabad emissary Pinchas Vishedski.

"That all changed with the outbreak of hostilities in Crimea," he explains. "The major change occurred in July 2014 with the start of the fighting. While only a small amount of members from the Jewish community were wounded, the situation took its toll and the group's economic position began to deteriorate. We then decided to begin evacuating families from the area".

During the visit, representatives of the Israeli delegation arrived at a seminar center where many families had been staying prior to their departure from the country. The purpose of the seminar was to provide a "soft landing" for the immigrants. During the course of the meetings, the Jewish immigrants received information about life in Israel, and even began to learn a bit of Hebrew.

The delegation also visited a school run by the "Or Avner" Jewish educational network in Kiev. The educational institution not only plays a major role in preserving Jewish identity among the community members, but is also one of the only places that offers dozens of children from disadvantaged families a hot meal, warm clothes and more. 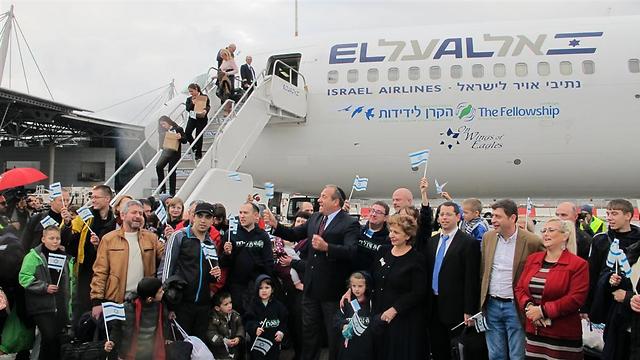 New olim step off plane
As part of the trip, the delegation also made a stop at the Ukrainian village of Zhitomir, which is home to a Jewish community of about 5,000. When the fighting broke out in eastern Ukraine, the village served as a temporary shelter for Jewish refugees who fled their homes without any belongings.

A number of Jewish organizations operate in the former Soviet Union, including, the Fellowship, which runs through proxy organizations including The JDC, the Jewish Agency, Keren Hayesod, the Jewish Federation, ORT, FSU, Shema Israel, and Tikva. 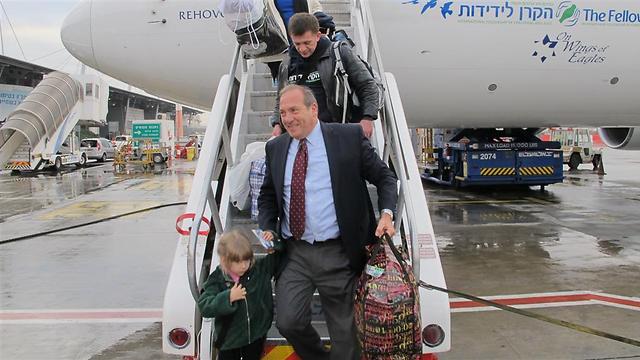 Rabbi Yechiel Eckstein with some of the new immigrants

"Welcome to Israel," Rabbi Eckstein greeted he immigrants. "It's very exciting to be here today. A year ago, I was in Ukraine, when Jews fled from their homes. I saw in their eyes fear, despair – they did not know if they would return to their homes. This was the first time that Jews had become refugees since World War II.

"We opened centers for them, provided food for them, and took care of them. As long as the state of Israel exists and as long as there are IDF soldiers who protect us, there won't be any Jewish refugees. The despair has turned into new hope today."

Sharansky also addressed the olim: "I grew up in the exact same places, where battles were held. When I grew up there, a Jew was considered to be someone who has a disease. We are very happy that you are here. You are joining today 5,200 Jews from Ukraine who came to Israel this year."