A photo of mud bathing in the Dead Sea is one of the winners of National Geographic's 2014 Photo Contest. The picture, taken by Nick Riley, features "seekers of eternal youth coating themselves in mineral-rich mud at the Dead Sea in Israel." It received an honorable mention in the competition's People category. 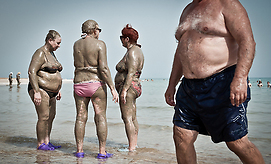 Photo: Nick Riley / National Geographic 2014 Photo Contest
A total of 9,289 entries were submitted from over 150 countries, with professional photographers and amateur photo enthusiasts across the globe participating. Photographs were submitted in three categories: People, places and nature.
2014 in Pictures
Yedioth photographer wins Local Testimony exhibit
Ynet
Regional photojournalism exhibition offers a fascinating glimpse into past year's events. Photo of the Year features young woman standing over grave of her boyfriend who was killed in Gaza.
Yedioth photographer wins Local Testimony exhibit
The competition was judged on creativity and photographic quality by a panel of experts. The grand-prize winner and the winner of People category was Brian Yen with his photo "A Node Glows in the Dark," which features a woman standing with her smartphone at the center of a crowded train in Hong Kong, surrounded by strangers.
Photo: Brian Yen / National Geographic 2014 Photo Contest

The photographer's caption: "In the last ten years, mobile data, smartphones and social networks have forever changed our existence. Although this woman stood at the center of a jam-packed train, the warm glow from her phone told the strangers around her that she wasn't really there. She managed to slip away from 'here' for a short moment; she's a node flickering on the social web, roaming the Earth, free as a butterfly. Our existence is no longer stuck to the physical here; we're free to run away, and run we will."

The winner of the Places category was Triston Yeo with his photo "Bathing in Budapest," which features the Hungarian capital's famous thermal spas.
Photo: Triston Yeo / National Geographic 2014 Photo Contest

The photographer's caption: "The thermal spas in Budapest (are) one of the favorite activities of Hungarians, especially in winter. We were fortunate to gain special access to shoot in the thermal spa thanks to our tour guide, Gabor. I love the mist, caused by the great difference in temperature between the hot spa water and the atmosphere. It makes the entire spa experience more surreal and mystical."

The photographer's caption: "Birds fly over the destroyed houses in Khalidiya district in Homs, Syria. In the vast stillness of the destroyed city center of Homs, there are large areas where nothing moves. Then, suddenly, wind blows a ripped awning, or birds fly overhead."

The photographer's caption: "Our road trip down to Miami traversed this outlook on the Blue Ridge Parkway. We rested on this ridge overlooking the mountains. Though we argued consistently throughout the journey, here we were, reminded of our brotherhood."

The photographer's caption: "I was up at an ungodly hour to make it to the Tsukiji Fish Market in Tokyo. With so many amazing things to see in the city, I had hardly slept, and managed to get off at the wrong station. Wave after wave of people kept coming through the station passageway. I spied a coffee shop with a vantage point and managed to snap a few shots, camera resting on the ledge. After the caffeine kicked in, I was ready to brave the river of people."