Regional photojournalism exhibition offers a fascinating glimpse into past year's events. Photo of the Year features young woman standing over grave of her boyfriend who was killed in Gaza.

Operation Protective Edge, the immigrants' reality in Israel, Pope Francis' visit and music icon Arik Einstein's death are only some of the topics featured in the winning pictures and series of Local Testimony, a regional exhibition of photojournalism, which opened this week at the Eretz Israel Museum in Tel Aviv. The photos, which offer a fascinating angle on the events of the past year, were ranked by a professional panel of judges in an independent procedure. The selected Photo of the Year was taken by Yedioth Ahronoth photographer Yuval Chen, who documented the girlfriend of Guy Algranati, a 20-year-old Maglan fighter, standing over his grave surrounded by his fellow unity members at the Kiryat Shaul Military Cemetery. 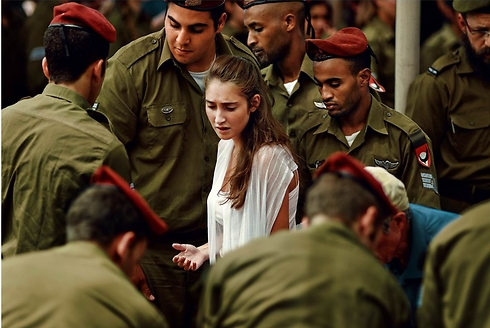 Photo of the Year (Photo: Yuval Chen)
"The young woman ingrained in the circle of olive uniform and red berets, shines with the whiteness of her clothing and innocence of her youth," the panel of judges wrote. "The photograph not only captures the moment but also turns it into a representative symbol. "Like in a theatrical vision or Greek tragedy, the choir members surround the daughter of the gods, and she stretches out her hand in a question. In a heartrending photo, Yuval Chen describes, through a personal case, the futile circularity of the reality of our lives."

Haaretz photographer Daniel Tchetchik won the Series of the Year category with "Sunburn" – a series of pictures from the photographer's journey around the country. 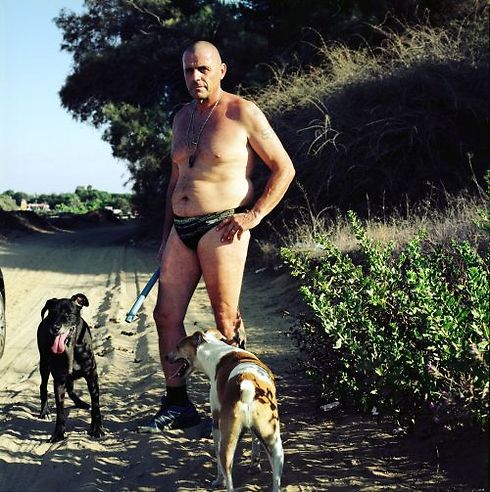 Winner of Series of the Year (Photo: Daniel Tchetchik)

"The winning series in the 2014 Local Testimony exhibition offers different and surprising views of the local now. Each of this in itself is a poetic combination of phenomena, surroundings and identities," the judges wrote.

The first prize in the News category went to freelance photographer Avishag Shaar-Yashuv with the picture "Mimouna in Or Akiva": Prime Minister Benjamin Netanyahu and his wife seated around the honorary table with their hosts, former mayor Simha Yosipov and incumbent Mayor Jacob Edery. 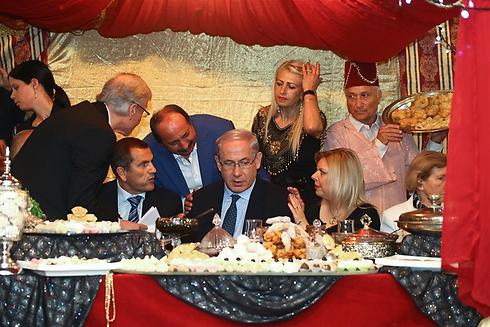 Yossi Zeliger came in second with a picture of Prime Minister Netanyahu and President Shimon Peres in a greeting ceremony for Pope Francis on his arrival to Israel.

The third prize went to Ariel Schalit with the photo "Prison Six": A mass rally opposite the military prison to support yeshiva students held in the facility due to their refusal to adhere to the Defense Service Law and conscript to the IDF.

The first prize in the News Series category went to Gali Tibbon with a picture of children experiencing "army life" during a traditional weapon's show on the occasion of the State of Israel's 66th Independence Day.

Oren Ziv came in second with photos of asylum seekers marching and being detained in different protests across the country.

The third place went to Kobi Wolf, who documented demonstrations held by thousands of asylum seekers from Africa throughout Israel, calling to cease their imprisonment in the Holot Detention Center, and demanding that the Israeli government recognize their status and their rights as refugees.

Omer Messinger won the first place in the Religion and Community category with "Purification": A mother baptizing her son in the muddy waters of the Jordan River. 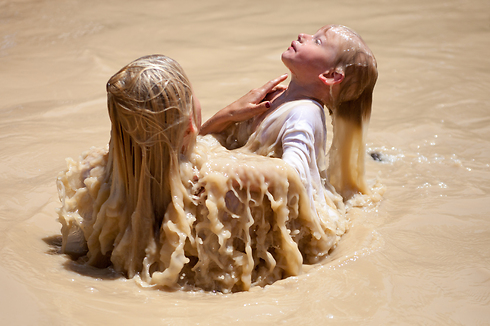 A mother baptizing her son in the Jordan River (Photo: Omer Messinger)

Michal Fattal came in second with "Warriors": Women soldiers in the Combat Intelligence Collection Corps at their military base in Southern Israel.

The third prize went to Haim Schwarczenberg, who documented a protester trampled by a mounted policeman, during his arrest at a demonstration against the government's plan to re-settle tens of thousands of Bedouins in the Negev.

Kobi Wolf also won the first place in the Religion and Community Series category for a series of photos of members of The Temple Mount and Eretz Israel Faithful Movement conducting daily publicity tours to promote the construction of the Third Temple in the most explosive place in Jerusalem.

The third prize went to Guy Cohen, who documented the beam of light penetrating through the window of the dome of the Church of the Holy Sepulchre, which symbolizes, for the believers, the resurrection of Christ.

The Local Testimony exhibition will be displayed at the Eretz Israel Museum in Tel Aviv until January 24.