Excavations in town of Magdala in Golan Heights reveal remains of ancient structure; 'historic and rare findings' include fragments of columns, parts of benches and pottery.

Archaeologists conducting excavations in the town of Magdala, situated on the shores of the Sea of Galilee, exposed a public structure from the Roman period, it was reported Thursday.

The structure's grandeur led researchers to conclude that the site contained the ruins of an ancient synagogue. "We're still at an early stage of unearthing the structure," they said. "We found parts of the structure, fragments of columns, parts of benches, the threshold of a door and pottery fragments."

"The importance of the structure is in direct relationship to its grandeur," said Michael Osband of the Institute of Archaeology at Bar-Ilan University, who was the excavation director.

Osband noted that archeologists had reached the conclusion that the structure was an ancient synagogue after they found embellished columns at the site. "This is a historic and rare finding," he added. 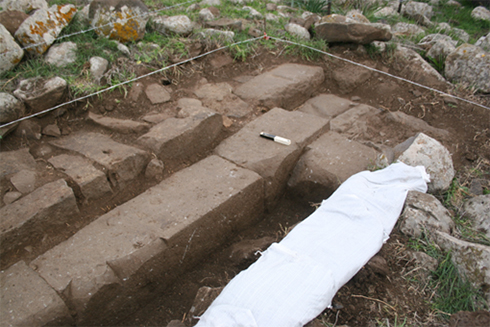 A part of the ancient structure discovered during excavations (Photo: Michael Osband)

The excavations in the Golan Heights started two months ago, following a thorough survey carried out in the Institute of Archaeology at Bar-Ilan University.

The researchers wanted to put a special emphasis on the Golan area during the Roman period and chose a site they were almost certain had been ruined before the Byzantine period.

The findings collected in the area, such as vases and coins, led the department's team to begin the excavations, which led to the exposure of the ancient structure several weeks ago. 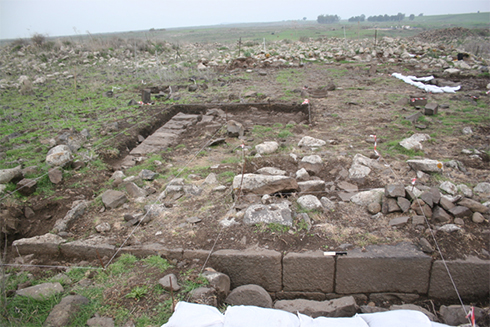 The excavations were led under Osband's direction, and were conducted as part of his doctoral studies. His advisor, Professor David. Adan-Bayewitz, who is the head of Bar Ilan's institute of Archaeology, described the discovery as "historic."

"So far, we have not found another use that could have been made of the structure besides a synagogue," said Osband. "The structure joins a very limited list of rural synagogues dated to the Roman period that have been uncovered so far."

The excavation findings indicate that the ancient town of Magdala, in which the synagogue structure is located, had been in use during the Roman period until the middle of the fourth century at the latest, and did not continue into the Byzantine period.

"The issue of the nature of synagogues from the Roman period has occupied researchers and archeologists for many years," Osband noted.

The continued excavations at Magdala are expected to shed light, among other things, on the exact years during which the synagogue had been in use.