Free English-language application for iPhones and iPads seeks 'to make the archaeological treasures of the Land of Israel available and accessible to audiences around the world.'

The Israeli Antiquities Authority has released a free app for iPhones and iPads which is meant to help kids get a feel for what archeologists do and experience what it is like to discover artifacts from the past. The app, "Dig Quest," features two simulated dig sites – a Roman period mosaic in Lod, and the Dead Sea Scrolls in Qumran.
Archaeological Discovery
Unique entryway to Herodian hilltop palace revealed
Itay Blumenthal
Archeologists uncover 65-foot-long corridor built as part of Herod's plan to turn Herodium into an artificial volcano-shaped hill, a monument meant to commemorate him.
Unique entryway to Herodian hilltop palace revealed

"Due to the fact that the Lod Mosaic is currently making a world tour in leading museums in the United States and in Europe, and that it is one of the most beautiful ancient works of art discovered in Israel, we thought that the mosaic will lend itself nicely to the iPhone platform and that the app will benefit from the huge amount of information that accompanies the mosaic during its travels in the US and Europe," the spokesperson of the Israeli Antiquities Authority (IAA) explained to Tazpit News Agency.

"The images on the mosaic – animals, fish, ships, shapes, hunting scenes – are also perfectly suitable for children and will find them enchanting. In addition, the App will be used by children who will visit the Lod Mosaic Museum when it opens in the city of Lod. 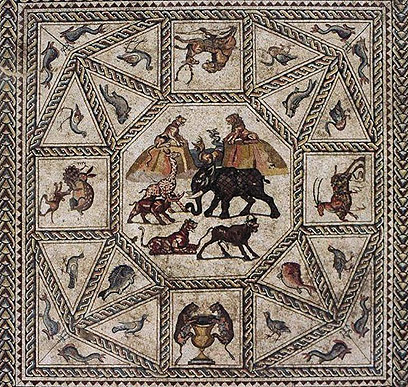 Roman period mosaic in Lod (photo courtesy of Lod Municipality)
The Roman dig features a fast-paced memory game, based on the animals found in the mosaic. The dig simulates the techniques archeologists use to brush away dirt to uncover mosaics. The dig in Qumran simulates what it was like to find and restore fragments of the Dead Sea Scrolls. The dig simulates what it was like to piece together fragments, puzzle style, of the Dead Sea Scrolls, and then to scan them using the technology that the Antiquities Authority used to be able to read the scrolls. The app plans to add more dig sites and content over time. "The Israel Antiquities Authority embarked on the development of the Dig Quest: Israel App for kids as part of the overall mission of the IAA to make available and accessible to audiences around the world the archaeological treasures of Eretz Israel," the IAA spokesman told Tazpit.

"In addition to our educational programs carried out throughout the school system, traveling exhibitions in the country and overseas, special education and professional programs such as Conserving the Stone and making material available on the internet, the app for kids brings together an advanced e-platform and the knowledge and expertise of the IAA curators and archaeologists to attempt to reach young audiences, aged eight to 12, and open to them the fascinating world of archaeology and the history of our country."

The app is in English and available for download at the iTunes Store for iPhones and iPads. An Android version will be made available soon.