Administrative Court of Alexandria cancels annual celebration at Rabbi Yaakov Abuhatzeira's tomb, which has drawn hundreds of Jewish pilgrims over the years, and orders government to remove site from Egyptian cultural monuments list.

The Administrative Court of Alexandria on Monday banned an annual festival in honor of Rabbi Yaakov Abuhatzeira, the grandfather of leading Moroccan Sephardic rabbi and kabbalist Israel Abuhatzeira (known as the Baba Sali).

For years, hundreds of Jewish pilgrims have been flocking to tomb of "the righteous from Morocco" in the Nile Delta province of Beheira, south of Alexandria. After the 1979 peace treaty with Israel, Egypt began allowing organized and heavily secured trips to the tomb.

The Egyptian court banned the visits and stripped the ministry's designation, acting on a complaint filed by local residents who objected to the mingling of men and women and the consumption of alcohol at the festival, and claimed that strict security measures applied during the festival negatively affected their normal daily life.

The residents had also expressed their anger over the normalization of ties with Israel by allowing the festival.

The complaint was first filed by local resident Ahmed Mohamed Attia in 2001. The Al-Youm Al-Sabaa newspaper reported that the court ruling was praised both by the residents and by the lawyers representing them.

The court also rejected an Israeli request from the United Nations to transfer the rabbi's bones to Jerusalem for burial, claiming that opening the grave contradicts the principles of Israel.

"Israel's request from UNESCO is unilateral and ignores the involved Egyptian authorities," the court stated, accusing Israel of trying to change the identity of "Arab Jerusalem" (the eastern part of the city) and "perpetuate the Jewish state in the Palestinian territories, making UNESCO a party to the matter."

The court went on to slam former Egyptian Culture Minister Farouk al-Hosni, who was known for his hostility towards Israel, over his decision to declare the site an Egyptian cultural monument in 2001.

The ruling defined the decision as "a huge historical error which harms the Egyptian people's heritage." The court ordered the government to remove the site from the cultural monuments list and inform UNESCO about it.

Magda Haroun, the leader of Egypt's Jewish community, defined the ruling as "unconstitutional." She told the al-Masry al-Youm daily that "the constitution protects the right of worshippers from all three monotheistic religions to hold their religious ritual."

Haroun criticized the dancing and alcohol drinking during the festival, but clarified that Jews had a right to visit the tomb.

She also slammed the decision to remove the site from the list of Egyptian cultural monuments, saying that "it will lead to the site's destruction," and expressed her anger over the linkage between Israel and the site.

"What does Rabbi Abuhatzeira have to do with the Zionist state? He was born and died before it was even founded," she stated. 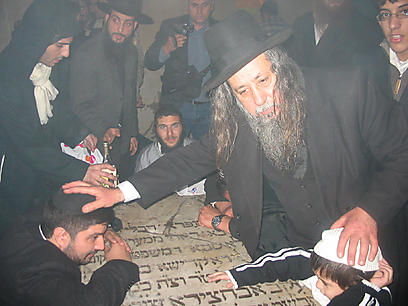 Yaakov Abuhatzeira, born in northern Morocco in 1805, was a son of the chief rabbi of Morocco. He fell ill during a visit to the sacred sites in Jerusalem and died in Egypt in 1879. His grave became a shrine built on a small plot of land in the largely rural Nile Delta province.

He is revered by some Jews as a mystic renowned for his piety and for performing miracles. The annual festival has in the past drawn hundreds of religious pilgrims each year, mostly Jews from Israel, Morocco and France.

The tomb is a vestige of Egypt's once-prosperous and thriving Jewish community, which dates back to the time before Moses. At the time of the founding of Israel in 1948, they numbered about 80,000 people.

But the multiple Arab-Israeli wars, and the resentment and expulsions that they engendered, have reduced Egypt's Jewish community to a few dozen elderly people in Alexandria and Cairo, according to the Israeli Embassy.

The annual religious festival has been a long-term source of controversy in Egypt. A court cancelled the event in 2001, but it was later resumed. In 2009, the Egyptian government banned Jewish pilgrims from entering because it took place during the Israeli government's Cast Lead offensive in the Gaza Strip; officials said they could not guarantee the pilgrims' safety at a time of intense public anger toward Israel.

In 2010, Egyptian security authorities arrested 25 men suspected of forming a new Islamic militant group that planned to carry out attacks on targets inside Egypt including the tomb of Abuhatzeira.

In 2012, the government called off the festival, citing political instability in the wake of the 2011 revolution that ousted Hosni Mubarak from power. Monday's court ruling, if it stands, seeks to permanently ban the festival.

Israeli Foreign Ministry spokesman Emmanuel Nahshon said his office is examining the decision of the local Egyptian court and, if necessary, will approach the Egyptian authorities about the issue and stress the importance of freedom of worship.