Summer's Gaza conflict had a minor effect on overall number of visitors to Israel this year, thanks to a significant increase in arrivals in first half of year.

Moreover, the drop in the overall number of visitors (including one-day visitors who did not spend the night in Israel) amounted to only 7% in 2014, thanks to the significant increase in incoming tourism in the first half of the year.

A total of 3.3 million visitors arrived in Israel in the past year, including 2.9 million tourists who stayed in the country overnight. 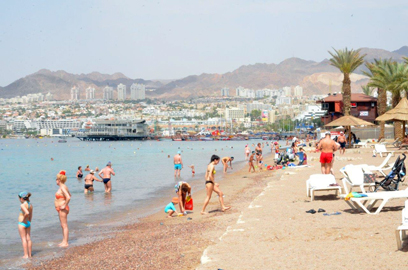 Tourists in Eilat. 'A recovery will be felt in the first half of 2015,' says Tourism Ministry director-general (Photo: Meir Ohayon)

Tourism Ministry Director-General Amir Halevy says Operation Protective Edge did stop the tourism momentum, but that a light can already be seen at the end of the tunnel.

"A recovery will be felt in the first half of 2015. The ministry's NIS 500 million ($128 million) aid package to tourism businesses has bolstered the industry and is restoring it as a growth engine which generates tens of billions of shekels for the Israeli economy," he added.

Some 110,000 workers are employed in Israel's tourism industry, about one-third of them in hotels.