Israel, the growing anti-Semitism in Europe, assimilation and the cost of Jewish education are only some of issues worrying America's Orthodox Jewry. So why don't they make aliyah? Because they believe Israel needs them in the US.

NEW YORK – It's Friday morning at the DoubleTree Hotel in Tarrytown, New York. The hotel staff is working to remove any sign of Christmas, which was celebrated here only yesterday.

In just a few hours, the place will be filled by hundreds of rabbis from around the world, alongside influential Halacha teachers and representatives of Jewish communities in the United States, and they cannot be greeted by Christmas trees and decorated bouquets.

Most Americans may be Christian, but this weekend belongs to the Orthodox Union (OU).

It happens once every two years. Members of the organization, which is mostly known for its kashrut department that has turned it into the world's biggest kosher brand, arrive from all over the country and from overseas to exchange opinions, form a policy and engage in a biblical discourse.

The OU is more than just a kashrut organization. It unites Orthodox rabbis and their communities from around the world (including Israel) and engages in internal Jewish social affairs. 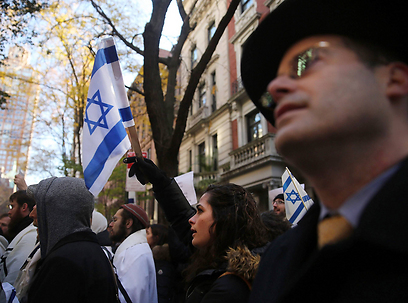 Pro-Israel rally in New York. 'Seeing the concern on the faces of the Jews in the Diaspora for Israel and its people strengthens the belief and feeling that the people of Israel are united and strong' (Archive photo: AFP)

As you may have guessed, the word "Israel" was tossed in the air quite a few times over the weekend. The Orthodox Jews in the US appear to stand by Israel without any reservations, and if they could vote in the Jewish state, they would likely support the Likud and other right-wing parties.

"We support Israel one-hundred percent," the organization's executive vice president, Allen Fagin, tells Ynet, but clarifies that the support "comes from the sidelines." "We don't live there and we don't serve in the army," he adds, "so we can't make decisions for Israel, even if we sometimes think it acts in a questionable manner for no reason."

Not immigrating for Israel's sake

Dr. Eliyahu Abadi, the rabbi of Congregation Safra in Manhattan, stood firmly by Israel's side. During a panel on imminent topics facing the international Jewish community, he stated that anti-Zionism is the new anti-Semitism and slammed organizations like the New Israel Fund and B’Tselem, which he defined as anti-Israel, a statement which not every Israeli would agree with.

So what prevents them from leaving everything behind and immigrating to Israel? One of the participants explains that the American Jews believe Israel needs them in the US in order to influence decision makers and maintain Israel's existence through financial aid and curbing anti-Israel proposals in the United Nations.

Rabbi Avi Berman, the executive director of OU Israel, says that "seeing the concern on the faces of the Jews in the Diaspora for Israel and its people strengthens the belief and feeling that the people of Israel are united and strong."

The American Orthodox Jews feel responsible not only towards Israel. They are also losing sleep over the situation of their European brethren. The growing anti-Semitism in the continent was also mentioned as one of the great challenges they must deal with.

Malcolm Hoenlein, the executive vice chairman of the Conference of Presidents of Major American Jewish Organizations, who is considered one of the most influential Jews in the world, stated firmly during the conference that there is no future for Jews in Europe in light of the demographic growth of the Muslim population in the continent, and that there is no way to combat it anymore.

Not everyone agrees with him. Norman Eisen, who served as the American ambassador to the Czech Republic until August 2014, told Ynet that Hoenlein's statement was far too strong in his opinion, even if the anti-Semitism in the continent is indeed a particularly difficult challenge.

Fagin admitted that there were tremendous challenges in Europe, noting that the decrease in the number of Jews affected their ability to fight anti-Semitism. He estimated that many Jews would live in Israel and North America in the future, and only very few in other places.

The assimilation issue was also raised quite a lot during the conference. Many of the speakers expressed their concern over the decreasing number of Jews in the US and said that the Jewish identity of young Jews must be strengthened.

Britain's Chief Rabbi Ephraim Mirvis voiced his concern over the fact that 27% of those who identified themselves as Jews in 2011 did not belong to any Jewish organization. He added that most of the tens of thousands of Israelis living in the United Kingdom had no contact with the Jewish communities. Another issue concerning the Orthodox community is the yeshiva tuition fee, which has broken records in recent years and become a huge burden on the Jewish families. Tuition for an American yeshiva costs about $22,000 a year, and according to the OU, a family needs an income of $150,000 a year in order to afford to send one child to a yeshiva. A campaign costing millions of dollars in New York alone was announced during the conference in order to deal with the problem and subsidize seculars' studies in the yeshiva. "This project will require much time and money but will require also from us to overcome our fear," said Fagin.

David Greenfield, a haredi New York City councilman, said there was a lack of Jewish leadership. The Jewish community may have an influence on the decision makers, he said, but it has failed to generate powerful leaders, as opposed to the black community which has charismatic leaders like Al Sharpton.

According to Greenfield, the average Jew would not be able to name one Jewish leader if asked, and therefore the Jews must nurture young, charismatic leaders – and not necessarily rabbis.