'In the next generation, US Jews will disappear'

Dr. Adam Ferziger, an expert in the study of modern Jewish denominations, says that due to assimilation, in the future the absolute majority of American Jewry will not be defined as Jews according to Halacha.

"In the next generation, a significant part – which may even be the majority of 'US Jewry' – will not be Jewish according to the Halacha, in light of the growing dimensions of intermarriage throughout the past few decades."

The person responsible for this statement was not surprised by Chelsea Clinton's marriage to the Jewish Marc Mezvinsky, or by the blooming relationship between Yair Netanyahu and the Norwegian Sandra Leikanger. Dr. Adam Ferziger – an expert in the study of modern Jewish denominations, and a senior lecturer at Bar-Ilan University's Department of Jewish History – led an international research group which convened in Oxford in early 2013 to study Jewish theology in the 20tyh century.

Jewish Identity
Last call for US Jews
Eric Schorr
Op-ed: If young American Jews had rabbi or community to reach out to them, they would be drawn back into Judaism
Last call for US Jews
According to Dr. Ferziger, plenty of books published in the United States in recent years explain why young non-Jewish girls should "get hold of a Jewish groom," as Jewish men are considered in the American public to be intelligent and gentle, non-violent and not alcoholics, make a good living for their family and find a way into the industry and liberal professions. "There isn't one reason for assimilation," Dr. Ferziger stresses, "but one of the main reasons is that the Jews succeeded in the great project – integrating into the US. They have integrated so well, that most Americans don’t see being a Jew as a negative thing, but actually consider it an advantage."

How does that fit together with the reports on violence and anti-Semitism against Jews, including in liberal New York, and even quite recently?

"Anti-Semitism in the US is not an official phenomenon or a wide phenomenon. It exists because the US is a Christian country, and it also has people with anti-Semitic stereotypes that the Jews run the economy. But there is no room to compare between that and the anti-Semitic outbreak in countries like Hungary, Ukraine, Croatia, France and other countries in Europe.

"Anti-Semitic phenomena are rare, especially in the upper class of the American population, and at the end of the day its open arms were what determined the assimilation trend and helped speed it up."

Orthodox balance is not enough

The alarming figures were presented by Dr. Ferziger during the third annual international conference of the Center for the Study of Relations between Jews, Christians and Muslims held at the Open University in Raanana, in which senior researchers from leading universities around the world presented their studies. 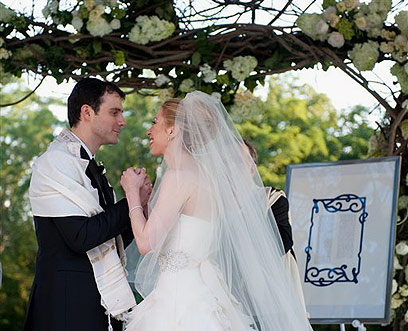 Chelsea and Marc are not alone. In the past year more than half of US Jews married non-Jewish spouses (Photo: AP)

"It's important to understand that the current generation is facing a revolution," he says. "There are in the US today about six million Jews, 90% of whom are non-Orthodox. At the current rate of intermarriage, most of the non-Orthodox people who will define themselves as Jews are children born into mixed marriages.

"In the future, the absolute majority will not be defined as Jews according to the rules of Orthodox Jewish Halacha. The picture should be balanced with the fact that the Orthodox stream is the only one which has grown in recent years, both because of a high birthrate and due to successful continuity by keeping the members of the young generation within the community."

No longer considered 'traitors' within community

The Pew Institute recently published an updated report on the situation of the US Jewry. It turns out that in the past year more than half of the Jews in the US married non-Jewish partners. Subtracting the ultra-Orthodox and modern Orthodox, the rate of mixed marriages soars to 71%.

Starting in the 1990s, attempts have been made to boost US Jews' affiliation with the State of Israel (for example, through the Taglit initiative). According to Ferziger, "These initiative did increase the participants' positive emotions towards Israel, but did not prevent the assimilation trend. Jews continued meeting non-Jews at universities, when going out and as part of work, and the willingness to enter a mixed marriage has become a routine." Dr. Ferziger explains that in the past, a Jew who dared marry outside of Judaism was considered to have betrayed and abandoned his forefathers' tradition. "The post-modern ethos is relative. Today the young people, and even many of the Jewish parents, assume that although it's easier to raise children as Jews when both parents are Jewish, in the multicultural US a mixed couple can also raise children with an exclusive Jewish tradition or combined with a Christian-American tradition."

Moreover, surveys conducted in recent years revealed a growth in the number of Jewish families that put up a Christmas tree in their home and mark Christmas as a sort of American holiday, both when one of the parents is not Jewish and when both parents are Jewish. Yet they do not feel a contradiction between being Jewish and using holiday symbols which they see as more universal than religious.

"In most Reform and Conservative communities there is an acceptance of the reality of mixed marriages, and there is a desire to find solutions," Dr. Ferziger says. "In as early as 1983, the Reform recognized children as Jewish, and they are wanted in the synagogue. But the innovation is that after a great internal conflict in many places, it was decided that the non-Jewish parent would also be invited to be a full-fledged member of the community.

"The prevalent perception in America is that a synagogue membership is a sort of 'Jewish citizenship.' You pay taxes, visit the synagogue several times a year and use its services when there's a bar mitzvah or a wedding.

"The synagogue affiliation is a Jewish-American statement that you belong to the Jewish collective, and recently there are synagogues which have even come up with new categories to define the non-Jewish family members. Some call them 'God fearing ' and others call them 'citizens of the Jewish nation.' After long discussions, a group of rabbis in California decided on the expression 'K'rov Yisrael' and encouraged communities across the US to adopt this name in regards to non-Jewish family members who are active in the synagogues."

Ferziger thinks that part of the motive for the "growing flexibility" is that "without the involved families, there is great doubt whether many synagogues could have survived. On the other hand, recent studies have proved explicitly that an affiliation with a synagogue holds significant power.

"It turns out that one can try leaving the Jews within the community through Jewish sports groups, cultural activities, charity institutions and more, but the thing that predicts the greatest chance of remaining in the Jewish community is a synagogue affiliation. The recent figures even point to the fact that a child from a mixed family which is active in the synagogue has a greater chance of continuing to identify himself as a Jew."

Dr. Ferziger notes that the Pew report emphasized the opposite movement within American Orthodoxy. While many American Jews in their 50s and 60s who grew up in Orthodox homes left in favor of the liberal denominations, among the Orthodox from the young generation the movement is towards becoming haredi.

Moreover, among the young Orthodox there is a growing affiliation with the State of Israel, while Jewish students in universities and colleges are exposed to lecturers and fellow students who see Israel as an immoral country which inflicts suffering on innocent people.

Is there no room for optimism in your research?

"First of all, it should be noted that alongside the quite difficult demographic trends, the Jewish community and creation life is rich and very diverse: Dozens if not hundreds of cathedras for Jewish studies have been established in the past decades in universities across North America; the output of studies and doctoral papers written every year is very impressive – and at the same time the haredi and modern Orthodox yeshivot are thriving.

"The Beth Medrash Govoha in Lakewood, New Jersey, has some 6,000 students alone. Beyond that, as the competition and hostility between the different religious denominations decrease, there is more cooperation and relationships are being built."

Ferziger presents an interesting point: The openness of the haredi denominations in the US towards the non-Orthodox movements has no correlation with what is happening in the Jewish state. "The more the Orthodox are sure of themselves and growing stronger, they are open to a connection with other denominations. I call it the 'Chabadization of the Lithuanian haredim.

"Just like Chabad Hasidim, inspired by the Lubavitcher Rebbe, bring every Jew closer without judging his parents or expecting him to observe mitzvot, prominent representatives of the Lithuanian Orthodox Jewry in the US have realized recently that it is important to strengthen the connection with all Jews," he explains.

"For that purpose, they are willing to cooperate with people from non-Orthodox organizations, and even with Reform and Conservative rabbis, in order to reach the entire public."