World shows solidarity with French Jews with 'I am Jew' hashtag

After four people were killed in a deadly attack on a Kosher supermarket, 'JeSuisJuif' hashtag storms web; reminder of darker days in France, when anti-Jewish terror was rampant.

The recent string of deadly terror attacks in Paris have inspired unity and signs of solidarity across the internet, this time supporting of France's Jewish community - the latest target of the al-Qaeda cell which has terrorized France in the last three days. 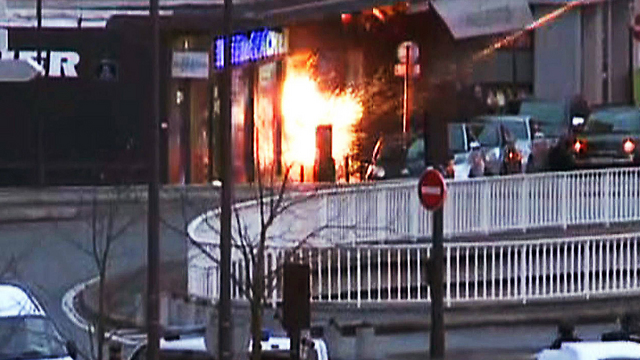 Attack on Kosher supermarket (Photo: AFP)
After the massacre of 12 people at Charlie Hebdo in Paris Wednesday, the hashtag "JeSuisCharlie" (I am Charlie) emerged and grew viral; after one of the police officers killed in the attack was revealed to be Muslim Ahmed Merabet, the internet took on the tag of "Je SuisAhmed"; now, after the double hostage-taking Thursday in which at least four people were killed at the Hyper Cacher, or Hyper Kosher, in Porte de Vincennes, the hashtag "JeSuisJuif" emerged.

As of time of publication, over 21,000 instances of the tag had been used on the social media site Twitter, with posts not just from French Jews, but from Muslims and people around the world, the Washington Post reported.

Amedy Coulibaly, the Kosher supermarket shooter, spoke with France's BFM-TV before a police raid left him dead, and claimed allegiance to Islamic State, saying the attack was motive by his desire to defend Palestinians and target Jews.

Thus incident follows a tough year for France's Jew's who have been repeatedly targeted, especially after Israel's 50 day summer war with Hamas, which led to massive anti-Israel protests in France and a string of anti-Semitic attacks.

More recently, on March 11, 2012, Mohamed Merah, 23, shot three soldiers dead in Toulouse and Montauban, before killing three students and a teacher at a Jewish school in Toulouse on March 19.