Paris saw the mother of all rallies

Op-ed: About two million people took part in the 'Republican march' in order to clarify their value system to the world. Even if it fails to generate a global campaign against jihadist terror, this unique rally has at least restored the French people's self-confidence.

PARIS – "There has never been such an event," said French-Jewish philosopher Bernard-Henri Lévy. He was exaggerating of course. The French are allowed to.

But the "Republican march" which captured Paris on Sunday was truly a unique event in terms of the number of participants, the messages it conveyed, the atmosphere and the diplomatic dimension.

About two million people participated in the march in Paris alone. They were joined by a million and a half who took part in rallies in other cities. In Israel we declare that there are one million protestors while the buses are still on their way. Here the numbers are real.

"Je Suis Charlie" (I am Charlie), the slogan which has taken over France in recent days, is their statement of faith. The Jews, who arrived at the rally in masses, added: "Je Suis Juif" (I am Jewish). Some combined all the victims into one statement: "Je Suis Charlie," "Je Suis Flic" (I am a cop), "Je Suis Juif."

The French philosophers are convinced that the extent of the march and its atmosphere pulled the French out of the state of shock they have been in since the massacre at the Charlie Hebdo newspaper office. Even if the march fails to generate a global campaign against jihadist terror, as people hope, it has at least restored the French people's self-confidence. 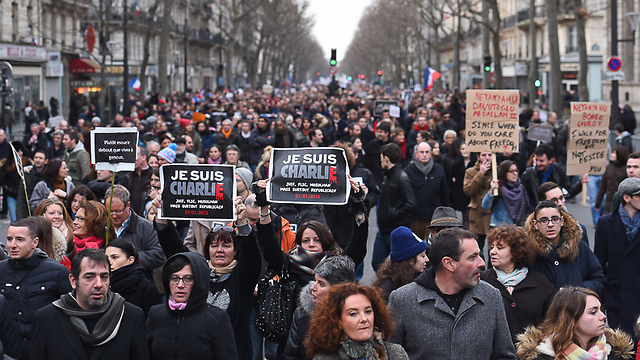 I chose to march the opposite way in order to sense the extent of the rally. It wasn't an easy operation. On all the signs I saw, the handwritten ones and the ones printed and distributed in public, there was not a single explicit word against Islam, or against the terrorists operating on its behalf. I did not see a single mention of the Islamic State or al-Qaeda.

But there were plenty of signs sanctifying freedom, freedom of expression, humor, secularism. "Make laughter, not war," one person wrote on his sign. "Smiling is human," another wrote. "No God, no master," a woman quoted in her sign. "I don't believe – I am not afraid," another wrote.

Some copied the relevant clauses from the Declaration of the Rights of Man and of the Citizen, a key document in the French Revolution, and some settled for the victims' names: The Charlie Hebdo cartoonists, the police officer who was murdered at the entrance to the building, and the Jews at the kosher supermarket.

It's very rare to see a popular protest with not a single negative word against someone or something. The protestors' exaggerated courtesy would have likely been met with a lot of ridicule from Charlie Hebdo's editors.

On Sunday morning, President Francois Hollande invited Lassana Bathily, the Muslim worker from the attacked kosher supermarket, for a meeting at the Élysée Palace. Bathily saved some of the shoppers. He is Muslim. In his courageous act, he enabled all politicians, led by the French ones, to make a distinction between terror and religion, between terror and the community. There are also good Muslims.

In the morning, dozens of heads of state arrived at the Élysée Palace in order to march together. Their cars pulled into the gravel driveway at the entrance to the palace. President Hollande greeted them on the steps. He kissed those he is fond of (Palestinian President Mahmoud Abbas, for example) and shook hands with the others.

The global media was very impressed by the extent of the gathering. Some saw it as a sign of a new, unified policy of the entire world against jihadist terror. If only. But when you look at the list you find many heads of African states which were French colonies in the past and are still linked to France, and many heads of marginal states in the international arena.

The United States was missing, China was missing, Russia was missing. With all due respect to the principality of Monaco, the only thing it can provide is a casino. 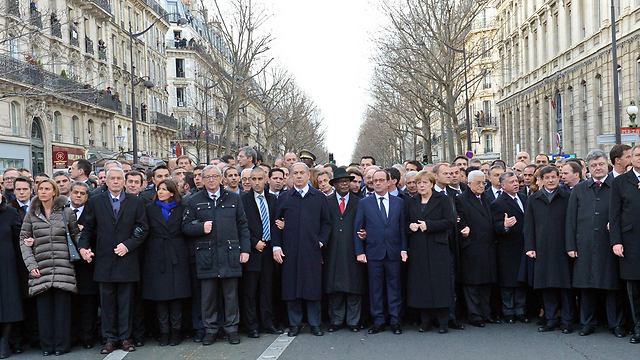 World leaders march in Paris. Most of these heads of states don’t uphold in their countries the same values they came to save (Photo: Haim Zach, GPO)

Most of the leaders who arrived in Paris on Sunday don’t uphold in their countries the same values they came to save. If a newspaper in their country had copied the cartoons published by the French weekly, its editors would have spent the rest of their lives in prison or would have been sentenced to death by hanging in the town square. They will fight for freedom of expression until the final drop of French ink.

In this context, something should also be said about us. Had terrorists entered the offices of a media outlet in Israel and murdered its journalists, what would have happened on the street? The Israelis would have been shocked by the act of terror – there is no doubt about it. But would have they been shocked by the violation of freedom of expression? I'm not so sure.

The heads of states' march began at the boulevard named after Voltaire, one of the most important philosophers in French history. Voltaire was the greatest fighter for freedom of expression. He is the man who coined the saying, "I do not agree with what you have to say, but I'll defend to the death your right to say it." There isn't a street with a better name for starting a march carrying the banner of freedom of expression (Voltaire was also a clear anti-Semite, but that's not the reason we're here).

When the leaders began walking, Prime Minister Benjamin Netanyahu found himself behind President Hollande and German Chancellor Angela Merkel, in the second row. Netanyahu immediately flanked to the right, allegedly in order to shake the hand of Mali's president, Ibrahim Boubacar Keita. In the middle of the handshake, he elbowed his way into the front row. The maneuver gave the march an Israeli charm. Our leaders are the only ones familiar with the elbowing doctrine.

"Am Yisrael Chai" (the people of Israel live), shouted a woman who was following the march from a small balcony on the top floor. Netanyahu raised his right hand upward, and then raised it again. I was filled with pride: All the leaders are shamelessly wrong, while our Bibi is the only one waving at the audience. 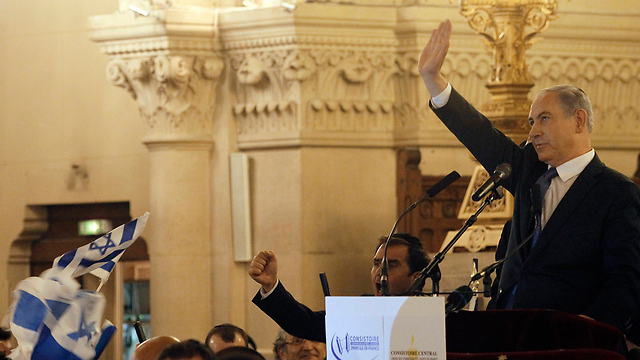 Netanyahu at the Jewish community ceremony. A speech filled with contradictions (Photo: AP)

In the evening, the Jewish community held its own event at the Grand Synagogue. The huge hall was crowded. The ceremony was conducted like Jews in the Diaspora conduct their ceremonies: Many speeches (because every organization leader and every activist must be honored), cantillation to the sounds of a pipe organ and a prayer for France.

The most impressive part of the ceremony was the lighting of candles in memory of the terror victims in France – Jews, Christians and Muslims. The candles were lit by children. Each child lit one candle.

Before Netanyahu began his speech, President Hollande left with his entourage, which also included the French prime minister and other ministers. The leaders of the Muslim community, who made an impressive presence in the ceremony, chose to leave as well. They all must have had previous engagements. The audience applauded as they walked out.

Netanyahu was greeted by the audience with great enthusiasm. Here, in Paris' Jewish community, he would have experienced no difficulties getting reelected for a fourth term.

Netanyahu has many faces, and they all offset each other.