Jewish American actor to be recognized in Jerusalem for his work as UN Messenger of Peace and commitment to Jewish heritage.

The Genesis Prize Foundation announced Thursday that its $1 million prize for 2015 will be given to actor Michael Douglas.

The prize,created to honor individuals who contribute to contemporary Jewish culture, will be presented to Douglas on June 18 in Jerusalem by Israel’s prime minister and by Chairman of the Executive Jewish Agency for Israel Natan Sharansky.

Among the members of the two committees that selected Douglas was Nobel laureate Elie Wiesel, Knesset Speaker Yuli Edelstein and former Chief Rabbi of the United Kingdom Lord Jonathan Sacks.

"I share this honor with my family, who encouraged me to investigate the depths of the Jewish faith,” said Douglas in response to the news. “I hope these lessons and values will be part of the legacy of the world I pass on to my children." 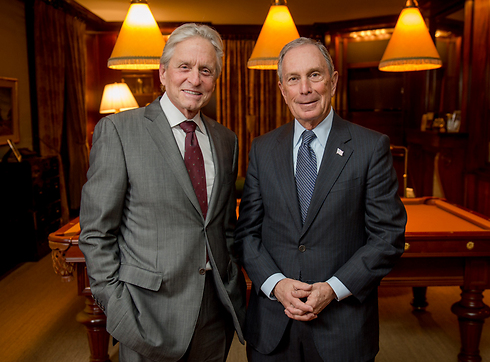 Douglas, winner of two Academy Awards, four Golden Globes, and an Emmy, is known for his intensive work as a Messenger of Peace for the United Nations, who focuses on the struggle to advance human rights, preventing gun violence, and working towards nuclear non-proliferation.

“The Douglas family’s experience of connecting with its heritage and embracing it on their own terms embodies an inclusive approach for Jews of diverse backgrounds. This is particularly important today, when the question of what it means to be Jewish has become more pressing than ever.”

The prize honors people “who have attained excellence and international renown in their chosen professional fields, and who inspire others through their engagement and dedication to the Jewish community and/or the State of Israel.”