American actor Michael Douglas, Welsh actress Catherine Zeta-Jones and their two children, Dylan and Carys, have been touring Israel in the past few days as part of a private visit which included Dylan's bar mitzvah celebration at the Western Wall in Jerusalem. After visiting all of the holy city's important sites, including the Western Wall Tunnels, the Hollywood family traveled to Tel Aviv, where they were spotted having lunch at the famous Blue Rooster restaurant. Douglas appeared particularly satisfied with the risotto dish and even posed for a photo with the restaurant's staff. 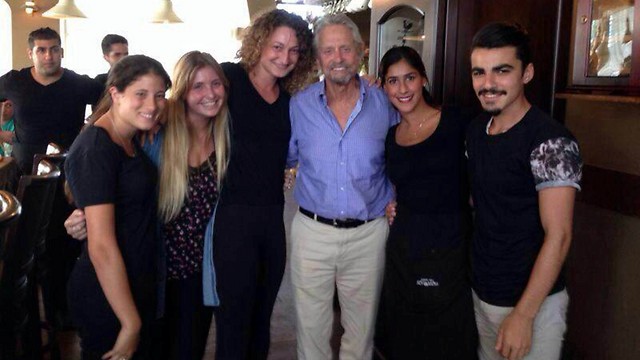 Zeta-Jones, on the other hand, preferred to avoid any direct contact with the photographers waiting at the entrance, and was whisked with her children through the back door.

In the evening, the family returned to Jerusalem for a private dinner. The menu was assembled by two chefs and one of the main dishes was couscous which, according to Zeta-Jones, was much tastier than the couscous she had in Morocco recently. 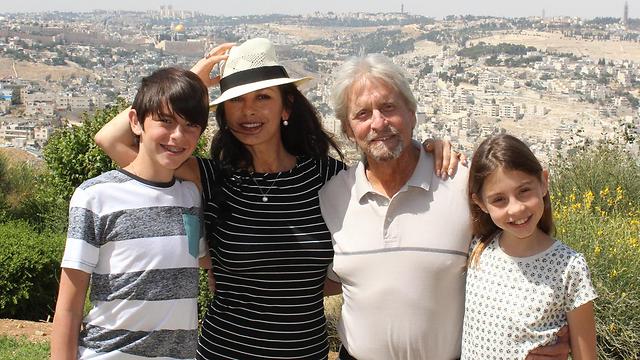 This is Douglas' second time in Israel and Zeta-Jones' first. According to Zeta-Jones, the family had such a great time that they are planning to return for their daughter's bat mitzvah too.

The recent years have not been easy for Michael Douglas. Despite winning praise and many awards for his role in "Behind the Candelabra," the 70-year-old actor's personal life took a big hit. In 2010, he announced that he was suffering from throat cancer.

Zeta-Jones went through a tough period too. In April 2011 she checked herself into a psychiatric hospital, seeking treatment for a bipolar disorder. In early 2013, the couple confirmed that they were taking time apart to evaluate and work on their marriage. Several months later, they reconciled and moved back in together.