Anti-Muslim rally in Germany. Fear of Muslims and Islam is on the rise
Photo: Reuters

The problem with Islam

Op-ed: The distorted mutation that is Islamic fundamentalism has to be acknowledged; many Muslims recognize there is a problem, which is not just a handful of Jihadists involved in terrorism.

Any debate on Islam in Muslim countries and among Muslim communities in the West is like stepping into a minefield. When it comes to the media outlets and academe, for the most part, the subject of Islam sparks a convoluted and apologetic discourse; on the social networks, on the other hand, the discourse it prompts is a racist one.

The thing is there's a problem. It's hissing and bubbling. Many Muslims realize there's a problem. The Egyptian president spoke recently of "a need to effect a substantial change in Islam." And in 2004, Abdulrahman al-Rashed, the former general manager of the al-Arabiya television news channel, said: "It is a certain fact that not all Muslims are terrorists, but it is equally certain, and exceptionally painful, that almost all terrorists are Muslims."

The problem is not a handful of Jihadists involved in terrorism. The problem is that the Muslim world in recent years has produced most of the high-casualty conflicts across the globe. The Muslim world struggles to embrace universal values, such as the status of women. And the problem extends to the free world. Entire neighborhoods in Europe are becoming "no-go zones" for veteran residents, and the police too in some cases.

Rotterdam Mayor Ahmed Aboutaleb stated that the major problem was resistance to integration. The percentage of social misfits and individuals opposed to integration is higher among the Muslim communities than among the other minorities. In addition, many of the world's Muslims, even those who live in the West, want to see Sharia law in effect, not only for themselves, but also forcibly for others. They are basically saying in the clearest of terms: We have come here to impose our values on you. 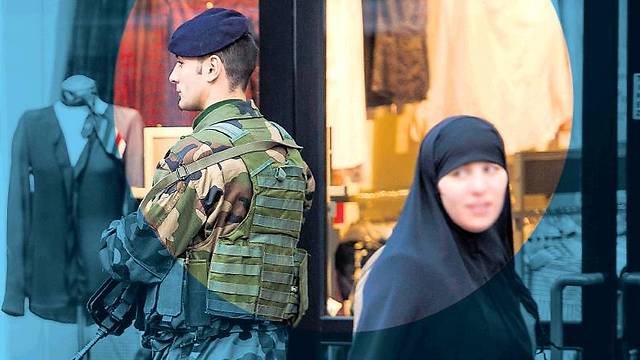 A Muslim woman stands near a soldier in Paris. The most serious problem in the Muslim world is the status of women (Photo: AFP)

According to a 2013 survey conducted by the Pew Research Center, 71 percent of Jordanians, 74 percent of Egyptians and 89 percent of the residents of the Palestinian Authority support enforcing Sharia law – with the emphasis on the enforcement.

The WZB Berlin Social Science Center conducted a similar survey on the viewpoints of Muslims in Western Europe. The findings show that 65 percent support the implementation of Sharia law, with 75 percent stating that Sharia has only one interpretation. And there are numerous and various surveys that reveal far more worrying data. One such poll, which made waves recently, determined that 27 percent of the Muslims in France support Islamic State. OK, so some surveys may be a little suspect; but the serious ones clearly show that the picture is bleak even without the need for any exaggeration.

Most polls reveal another alarming finding – support for fundamentalism, Islamic State or terrorism is higher among second and third-generation Muslims. The trend, thus, is not one of integration, but of radicalization and Islamization instead. True, we're talking about a minority; nevertheless, the bottom line is that millions in Europe support, at some level or another, the fundamental notion of the global Jihad – the establishment of an Islamic caliphate. They fall into the same ideological expanse as the Taliban, Hamas, Islamic State and Boko Haram.

Christian – or non-Muslim rather – Western Europe is not free of discrimination against Muslims. Studies conducted in almost every country in Western Europe show that an individual with a Muslim name has less chance of securing a job than someone with a local name. Fear of Muslims and Islam is on the rise. A survey conducted in Germany reveals that 70 percent of Germans believe that there is a clash between Islam and the values of the West. A similar survey reveals that 74 percent of French citizens think that "Islam is not compatible with the values of French society," with some 76 percent of Brits expressing the same sentiment.

Is this racism? Not necessarily. Stanford University Professor David Laitin sent employers in France job-application forms from three female candidates – a white French Christian, a Senegalese Muslim and a Senegalese Christian. The Senegalese Christian woman suffered no discrimination in relation to the white French Christian; the Muslim woman, however, did. In other words, it's not a matter of color or country of origin. The concern is for religious affiliation, which is becoming more threatening. The desire of too many Muslims to impose their values is encouraging fear and discrimination.

There are other minorities who have chosen a different path. The Hindus who arrived in Britain, for example, are no different in color to the Muslims. They suffered from the same discrimination, at the outset at least. But they integrated. And not only did they integrate, but they have made some amazing achievements in numerous fields. In education, for example, they have surpassed the white children, and the Jewish ones too. They have never sought to impose their culture. They don't have religious centers that nurture hatred and incitement – like some of the mosques.

Many academics argue that Islam's hostility towards the West is the result of white Europe's exploitative and colonial history. Post-colonialists promote this claim in almost every academic institution in the free world. It's a flawed argument. After all, the Hindus, too, suffered under colonialism. They, too, were exploited.

The Jews suffered too, a whole lot more, at the hands of the racist forces on the European continent. And not just suffered. They were destroyed en masse. But we don't hear about Jewish or Hindu terrorism, or about vengeance, or about incitement, or about the nurturing of extremism because of dark chapters in white history.

Others, like Jimmy Carter, argue that terrorism, like we witnessed in Paris, stems from the Israeli-Palestinian conflict. Really? After all, 99 percent of the violence in the Muslim world is directed against Muslims. Were 148 people massacred at a school in Pakistan because of Israel? Has Carter lost his mind? But Carter – oh, the shame – is offering justification for terrorism. The current US president, too, Barack Obama, insists on living in denial. He refuses to acknowledge the fact that we are dealing with radical Islamic terror – as if millions of Muslims didn't come out in protest against the cartoons. One thinks there is no Islamic radicalism, and the other thinks that Israel is the reason for its existence. With such leaders, the free world is in big trouble.

The most serious problem in the Muslim world is the status of women. Most so-called honor killings occur in the Muslim world. It has nothing to do with colonialism or discrimination. Those who oppress 50 percent of their community will always be oppressed. Lowering the status of woman lowers the status of society as a whole. Societies that promote equality don't produce terror. Patriarchal societies breed oppression and fundamentalism. But the post-colonial scholars and Carter choose to ignore the reality.

Those who absolve the Muslims of responsibility, who go easy on them and make excuses for them, who ignore the massacres perpetrated by the Islamists, primarily against Muslims, and who ignore the oppression of women are the racists, the ones who regard them as inferior. The truth is they are equal. There are millions of Muslims who choose democracy, equality for women, human rights. But the enlightened in the West, of all people, are the ones who are strengthening the radicals.

Saudi Arabia, Qatar and billionaires like Alwaleed Bin Talal are investing fortunes in the establishment of "Islamic study centers" and Middle East studies faculties at leading universities in the West. The tainted money has corrupted countless academics. They have nurtured the idea that the West is to blame, and have absolved the Muslim world of all responsibility. They haven't helped the Muslims. They have exacerbated the problem.

One has to admit then: Neither the Western hostility nor the colonial legacy is to blame for the Muslim fundamentalism. It's Muslim fundamentalism, it's a system of values that promotes the oppression of women that is causing and intensifying the hostility towards Muslims. After all, some of the perpetrators of the attacks, such as Amedy Coulibaly, the terrorist from the Jewish supermarket in Paris, are new converts to Islam. They undergo concentrated brainwashing that allows them to recite slogans about "the West that is bombing the Muslims," whereas the Islamists are the ones, for the most part, who are massacring the Muslims.

Islam, too, has a glorious history of achievements. But one has to recognize the existence, too, of a distorted mutation that is harming, first and foremost, the Muslims themselves. There is no instant solution. But self-deception, of the Muslims and the West, only exacerbates the problem. We need to listen to brave Muslims who voice harsh criticism. It won't solve the problem. But without a sober view, without acknowledging that there is a problem, there will be no solution.