Seven Israeli Arabs have been charged with membership of an illegal organization for attempting to join Islamic State, it was cleared for publication Sunday. Among the seven is Adnan Jamil Ala a-Din, a 39-year-old former public defender from Nazareth, who has branded himself the "Islamic State chief of staff in Palestine." 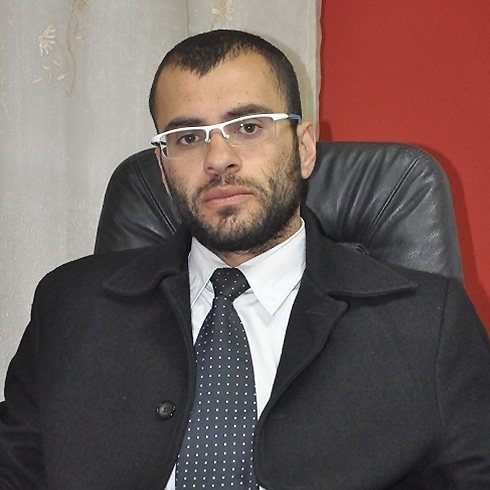 The defendants are charged with belonging to an illegal organization. Defense Minister Moshe Ya'alon classed Islamic State an illegal organization last year, outlawing any activity related to the group, to help the defense establishment tackle Arab and Palestinian support for the group within Israel and the West Bank. According to the indictment, the group met at a horse ranch in the Arab village of Kafr Manda, in the Galilee. There the seven practiced making firebombs and other makeshift weapons. They also attempted to raise funds for their hoped-for trip to Syria, which, according to the legal documents, puts the price of joining Islamic State at $1,500. They also bought sheep to practice slaughtering living beings.

In addition, the group had made contact online with Islamic State members in Syria, including Israeli nationals who went to Syria to fight as part of the radical organization.

Last week, Karim Abu Salah was arrested at Ben-Gurion Airport, attempting to fly abroad with more than NIS 40,000 (some$10,000), which he planned to hand over to Islamic State. He is charged with plotting to murder Israeli security officials and Israeli Druze, some of whom still maintain family ties with Syrian Druze. He is also charged with seeking to obtain automatic weapons and trying to raise funds for weapons. Last September, Ynet spoke with Ala a-Din after he was fired from the Public Defender's Office for his pro-Islamic terror comments during the 50-day Operation Protective Edge in Gaza. "I am doing God's work and will continue to support (the group) as long as their actions follow God's decrees," he said at the time. "More and more people will support Daesh (the Arabic acronym for Islamic State), the moment they understand it is a national phenomena. Most Muslims do not know that there is a stable state with clear policies. This is a state that believes in the Quran and the Prophet Mohammed."

The Shin Bet and the southern branch of the police YAMAR investigative unit have also arrested an Israeli citizen in the Negev on suspicion of belonging to Islamic State. The arrest is unrelated to the group in the north.

The suspect, Omar Musa Khalil Abu Kush, was indicted in Be'er Sheva District Court on Sunday on charges of making contact with a foreign agent, supporting a terrorist organization and planning to launch an illegal organization.

Abu Kush was arrested on November 20, 2014, after police received information that he was active in Islamic State, and that he had encouraged others to join the group. The defendant had recently completed his medical studies at the Jordan University of Science and Technology.

During questioning, the man admitted support for Islamic State and said he had met with members of the group in Jordan, and had planned to go to Syria and join the fighting.

It emerged last week that a young Israeli Arab man from the central town of Qalansuwa had been caught and tortured by the ruling regime in Syria as he tried to join the opposition forces.

About two weeks ago, it was cleared for publication that the Shin Bet and IDF arrested a terror cell in November 2014, which identified ideologically and religiously with Islamic State and whose members planned different types of terror attacks targeting Israeli civilians and soldiers.