Jordan to send ambassador back to Israel after tensions eased

Amman says it's sending envoy back after improvement in numbers of Muslim worshipers being allowed on the Temple Mount to pray at al-Aqsa.

Jordan will return its ambassador to Israel, the government said on Monday, three months after withdrawing the envoy in protest at Israeli restrictions on access to Jerusalem's Al Aqsa mosque.

For the first time since making peace with its neighbour in 1994, Jordan announced in November it was pulling its envoy out of Israel following growing tensions over the sacred compound housing Al Aqsa mosque - the third holiest site in Islam. 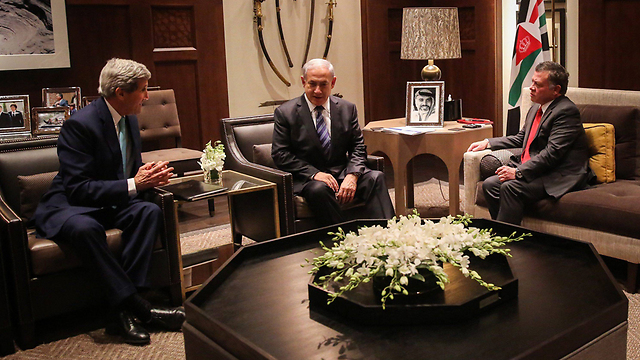 Netanyahu meeting with Jordan's King Abdullah and US Secretary of State Kerry amid rising tensions on Temple Mount (Photo: EPA)

Government spokesman Mohammad al-Momani said that since then, Israel had taken significant steps to ease the friction and was allowing many more Muslims to access the site, which is also the holiest place in Judaism.

"We noticed in the last period a significant improvement in Haram al-Sharif with numbers of worshipers reaching unprecedented levels," Momani said. Haram al-Sharif, known in Judaism as Temple Mount, is where the mosque is located.

"This is an important decision that reflects the shared interests of Israel and Jordan, chief among them being stability, security and peace," Prime Minister Benjamin Netanyahu's office said in a statement.

Israel shut the Al Aqsa compound for one day last November after a far-right Israeli-American activist, who had spoken out against a ban on Jews praying at the ancient compound, was shot and seriously wounded in Jerusalem.

Jordanian officials said the mosque complex was swiftly reopened after the personal intervention of King Abdullah, whose custodianship of the holy site was recognized in the 1994 peace treaty with Israel.

The compound, which also houses the Dome of the Rock, the gold-plated shrine from where the Prophet Mohammad is said to have ascended to heaven, is run by several hundred Jordanian government employees.

Momani said the ambassador would be returning to Israel later on Monday, adding that the government hoped the relative calm around the holy site would continue.

Jordan blamed Israel for the tensions, saying it had not moved to restrain Israeli far-right nationalists who sought to overturn the Jewish prayer ban.

"The message was delivered and reached the Israelis and on this basis we have asked our ambassador to go back to his work in the embassy this evening," Momani said.

Jordan is one of only two Arab states to have made peace with Israel. But this has never won much domestic favor, given Israel's continued presence in the neighboring West Bank.