Foreign Minister Avigdor Lieberman ordered on Wednesday the immediate suspension of Israel's ambassador to Switzerland Yigal Caspi and two additional diplomats for Twitter posts they shared on their personal accounts seen as critical of Prime Minister Benjamin Netanyahu and the foreign minister.

Lieberman ordered the diplomats be returned to Israel for disciplinary hearings prior to their termination. The other two diplomats being called back to Israel are Assaf Moran, who handles political affairs at the embassy in New Delhi, and Yaron Gamburg, a Political Research Department employee and former spokesman for the Israeli embassy in Paris.

According to the Civil Service Regulations and Foreign Ministry provisions, foreign servants are prohibited from making their political views public, especially in the case of diplomats who are supposed to represent Israel's interests to the world and operate as a source of Hasbara (Israel advocacy) on social media. 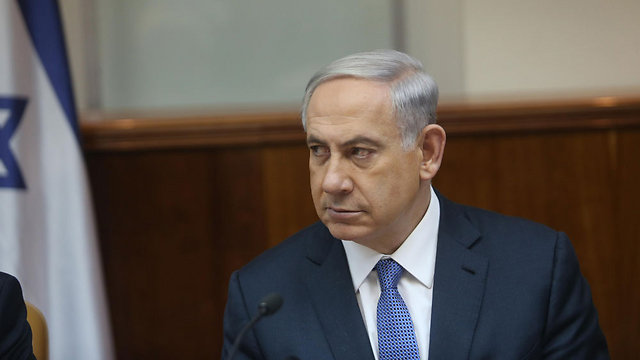 Prime Minister Benjamin Netanyahu (Photo: Alex Kolomoisky)
Ambassador Caspi retweeted posts by journalists who criticized Netanyahu and Lieberman. One of the retweets read: "It's shocking how Lieberman waved off his ministers. Not that they were especially good, and yet his use of people, bringing them in and letting them go when he is sick of them, is horrible." Caspi also retweeted a post by a journalist who criticized Netanyahu's planned speech to Congress: "Is it no longer possible to suffice in scaring us here in Hebrew? (He) has to fly all the way to the US Congress and tell them in English how dangerous Iran's nuclear program is?" Another journalist retweet shared by Caspi read: "The Israeli government's strategy in the last six years to confront diplomatic challenges is excommunication, fortification and victimization. With no initiative, no creativity and no diplomacy." Another retweet by the same journalist and shared by Caspi read: "After it appears that Netanyahu has lowered Israel-US relations to its worst situation, it always turns out that he continues to lower the bar to a new level." Political analyst at the Israeli embassy in India Assaf Moran retweeted a post by PR specialist Moshe Gaon who also joined in on the Netanyahu criticism and wrote: "Netanyahu understood – do everything except for talk about social issues. Whining, corruption, Sara, associations, security – everything except for an agenda that replaces the ruling power." Moran praised Channel 10 news anchor Raviv Drucker on Twitter and wrote, "Raviv Drucker the genius!" after the anchor engaged in a confrontation with the representative of the Netanyahu family lawyer David Shomron. After Lieberman called for his suspension, Moran erased all of the tweets from his Twitter account where he identified himself as a diplomat. Gamburg, who works in the Political Research Department of the Foreign Ministry in Jerusalem, was suspended after tweeting: "I heard Bennett complain that the media has pounced on him because he is a member of the right-wing. What a poor thing… he is a hallucinatory, prophetic, violent, homophobic, and anti-social rightist. So what does he want??"

Meanwhile, in the United States, Israeli Ambassador to the US Ron Dermer came under fire from Obama supporters for a tweet mocking the White House's response to Netanyahu's planned speech in front of Congress, tweeting: "Breaking Protocol, Choosing Sides: Go Patriots."

The White House had previously said that Netanyahu's speech, which was initiated by Republican Speaker of the House John Boehner, was planned in a break of protocol, as Netanyahu did not plan the visit with the White House or President Obama.