The support for Netanyahu is turning into an act of defiance against US president
Photo: AFP

Op-ed: Despite his declarations, Netanyahu is thinking less about Iran and more about politics – both Israeli and American. While the Republicans are deriving pleasure from the slap in Obama's face, the price will be paid by us.

"While there are those who are focusing on protocol or politics, a bad deal with Iran is being formed," Benjamin Netanyahu has declared. The remedy for this bad agreement, it turns out, is a speech which the prime minister will deliver in Washington, DC.

Netanyahu is suggesting the following equation: It's true that this speech faces a strong opposition in the United States. It's true that it is infuriating the administration and will create high tensions between Israel and US President Barack Obama. It's true that there is a good chance that the administration will punish Netanyahu (i.e., the State of Israel) because delivering the speech is perceived as breaking the acceptable rules of the game between countries (a head of state does not make an official visit when the head of the state he is visiting makes it explicitly clear that he is not interested in the visit). It's also true that to an innocent bystander, it seems like cynical attempt to grab the spotlight in order to advance the guest's interests in the election campaign. But all that pales into insignificance in the face of the fundamental achievement – stopping the bad agreement with Iran.

If we accept Netanyahu's equation, what the prime minister will say in front of the half empty chamber will have a supernatural effect, which will allegedly justify any cost.

It's unclear how exactly that will happen. After all, Netanyahu's stance is known. What he says in Washington won’t surprise anyone. He is not a person who has no access to the media. He has no difficulty voicing his opinion in an interview, in a Knesset speech, in an article which will be published in an Israeli or American newspaper. Netanyahu has no difficulty conveying his stance in a series of conversations with administration officials, senators, Congress members and basically anyone he wants.

The invitation to address the American elected representatives was not aimed at delivering information which is not available through other means. It's a show of respect. It's not meant to be an oppositional situation, but the exact opposite: In such an invitation, the US expresses its support for a man and a nation through an event which is mainly ceremonial. 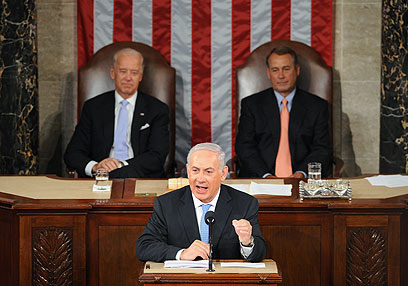 If we accept Netanyahu's equation, the things he will say in front of a half empty chamber will have a supernatural effect, which will allegedly justify any cost (Archive photo: AFP)

Fiery speeches in front of the representatives are not meant to change opinions. They reflect the Americans' support for a person they wish to honor. The chance that Netanyahu will suddenly raise a magical argument there that will immediately change the listeners' opinions is slim. Everyone is aware of his stance on the agreement with Iran. I doubt anyone expects to hear anything new from him.

Even then, the move would have been risky, as it attempts to force the president to adopt a policy he is not interested in and could lead to a dangerous response against Israel – the US president has a lot of room to maneuver on foreign affairs which does not depend on the Congress' approval, and there are plenty of ways to punish whoever brutally intervenes in the American political game – but it's possible that he has more to gain than to lose from this risk.

But once the Democrats clarified that they do not approve of the visit, and once many of them made it clear that they would stay away from the chamber during the prime minister's speech, the damage created by the visit has become much greater than what Netanyahu stands to gain from it. Instead of creating a consensus of support, it is creating factionalism.

The support for Netanyahu is now turning into an act of defiance against the president. This outcome is the last thing that will serve the State of Israel's interests in its battle against a nuclear Iran.

But Netanyahu, despite his declarations, is thinking less about Iran and more about politics – Israeli and American. He is thinking like a Republican governor of a state in the Middle East. The party members are deriving pleasure from the slap in Obama's face. The price will be paid by us.