Most senior US senator to skip Netanyahu speech

Vermont legislator Patrick Leahy called Speaker Boehner's invitation to Israeli PM a 'tawdry and high-handed stunt'; Netanyahu says he will not back out.

The US Senate's most senior lawmaker said Tuesday he will skip Prime Minister Benjamin Netanyahu's speech to Congress next month on Iran, calling the invitation by Republicans without White House consultation a "tawdry and high-handed stunt." Sen. Patrick Leahy , a 42-year veteran from Vermont, joined a half dozen Democrats who have decided to boycott Netanyahu's speech, which comes in middle of delicate negotiations involving the United States, Western powers and Iran over its nuclear program. Republican House Speaker John Boehner invited Netanyahu to address a joint meeting of Congress on March 3. "The unfortunate way that House leaders have unilaterally arranged this, and then heavily politicized it, has demolished the potential constructive value of this joint meeting," Leahy said in a statement. "They have orchestrated a tawdry and high-handed stunt that has embarrassed not only Israel but the Congress itself." 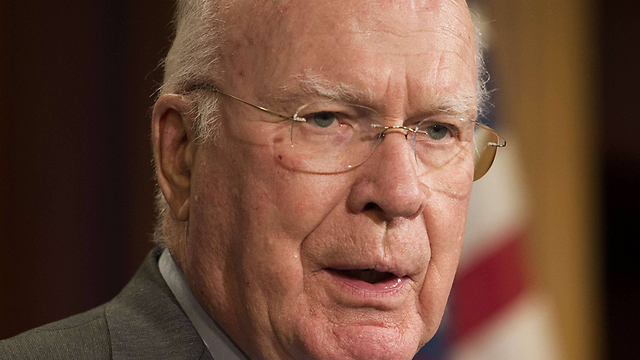 rime Minister Benjamin Netanyahu, fending off criticism at home and abroad, said on Tuesday he remained determined to speak before the US Congress next month on Iran's nuclear program.

"I intend to speak in Congress, because Congress might have an important and influential role on the nuclear deal with Iran," he said.

Democrats have complained that the speech is an affront to President Barack Obama, who has said he will not meet with Netanyahu when he visits the United States and who said Monday that he has "very real differences" with the Israeli leader over Iran and sanctions.

Vice President Joe Biden also will miss the speech, citing unspecified travel plans; Boehner has defended the invitation. Netanyahu is a sharp critic of administration negotiations with Iran over its nuclear program, and Democrats fear he'll use the opportunity to embarrass Obama and further his own re-election prospects. The speech comes two weeks before elections in Israel. In Israel, Netanyahu has insisted he will address Congress despite calls in the United States and in Israel for him to cancel the speech. A half dozen Jewish House Democrats, angered by the developments, met privately last week with Israeli Ambassador Ron Dermer and pressed for Netanyahu to find an alternative format for speaking to lawmakers other than a speech to a joint meeting in the House chamber. Leahy joins Vermont's other senator, independent Bernie Sanders, who said on Monday he would skip the speech. "It has long been an unwritten rule and practice through the decades that when it comes to American foreign policy, we speak and act thoughtfully, with one voice when we can, with the national interests of the United States as our uppermost consideration, and with caution about the unintended consequences of unilateral actions like this," Leahy said in his statement. "They have diminished that valuable precedent."