Ancient citadel uses iPads, Tablets and other technology to keep kids interested in the exhibits; 'It’s like the old audio guides, but it’s an audio-visual guide,' says developer.

How many times have you toured a museum with a bored child who won’t get off his iPad? Now, the Tower of David in Jerusalem’s Old City is offering a way to use iPads, Tablets and other technology to keep kids (and adults) interested in the exhibits.

"The idea is to make the Tower of David accessible for the new generation by using the best of digital technology to reveal the ancient stones," Rose Ginosaur, the director of development for the museum told The Media Line.
Dig Quest
New app teaches kids about archaeology in Israel
Tzvi Zucker, Tazpit
Free English-language application for iPhones and iPads seeks 'to make the archaeological treasures of the Land of Israel available and accessible to audiences around the world.'
New app teaches kids about archaeology in Israel
Visitors will rent iPads or Samsung Tablets that are preloaded with the technology. For example, there is the Augmenti Guide to help explain the 360 degree view of Jerusalem from one of the museum’s towers.

"It’s like the old audio guides, but it’s an audio-visual guide," Alon Fishman, who developed the mobile geospatial technology based on his experience in the army, told The Media Line. "It augments the real life that you see through the camera."

The map offers "pins" that you can click on for an audio and video explanation of many of the buildings you are seeing. As you move, the map moves with you, offering different "pins" each time. "This is the first time this technology is being used for civilian use," Fishman said, adding that the patent is pending.

Inside the museum, for $6 visitors can rent an iPad that is preloaded with a game called "Swipe the Citadel." An archaeologist tells the user that his daughter is lost somewhere in the museum and asks for help to find her. The game is made for children between the ages of 7–12, and takes the kids on a 90-minute tour throughout the museum, asking them to answer questions to get the next clue. 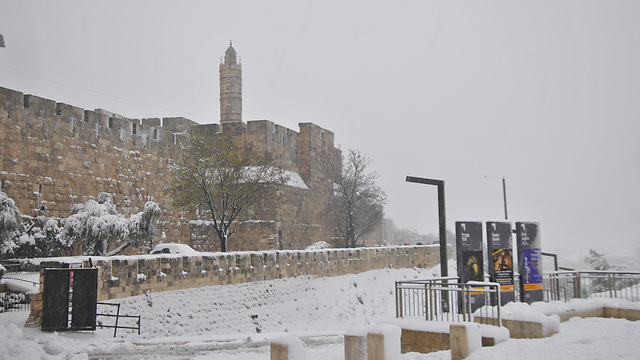 The Tower of David covered in snow (Photo: Ofer Meir)
Professor Tzvika Kuflik of the University of Haifa had his students develop some of the technology content as part of their final projects for his course. He says this kind of interactive technology will soon be used around the world. "We are living in an era where the environment interacts with us," he told The Media Line. "My research is in using real technologies to enhance the museum experience." Those who don’t want to rent a tablet can use QR codes on their smart phones. There are two sets of QR codes (those box-like squares that have replaced bar codes). The QR codes meant for children send them on a scavenger-like route through the museum. Those meant for adults give more information including photos of what parts of the museum looked like in the past.

Tower of David app (courtesy of museum)
The museum, which boasts an ancient citadel with foundations that date back more than 2000 years, has long attracted visitors with both indoor and outdoor exhibits, along with stunning views of Jerusalem. About 300,000 visitors come to the museum each year – about half are from abroad, and half are Israeli. "We want Israelis who live here to come back again and again," Ginosaur said. "Once they come and play Swipe the Citadel. Another time they use the Augmenti Guide. Another time they just wander around and use the QR codes."

There is also a newly discovered moat surrounding remains of King Herod’s palace. Part of the new technology is a special large television screen that shows a 3-D film even during daylight. The film shows what Herod’s palace probably looked like at his height about 2,000 years ago.