After 72 years, Holocaust survivor donates doll that 'saved' her

"This doll has been with me everywhere I went," says Holocaust survivor Tzipi Cohen, who decided this week to donate the doll that has accompanied her for more than 70 years, since her days as a young girl during the Holocaust. The doll will go to the Shem Olam Faith and the Holocaust Institute for Education and Research. "Preserve the doll and the story of how I was saved so that it will continue after my death," Cohen told the institute, after relating the story of how the doll saved her life while all the children around her went to their deaths.
Survivor
'Mengele twin' passes away
Roi Mandel
Menachem Bodner dies at 74, two years after beginning journey with genealogist to find lost twin with whom he was imprisoned in Auschwitz.
'Mengele twin' passes away

Seventy-two years ago, during World War II, Tzipi and her family were living in Budapest when she received the doll as a birthday gift, not long after the war had arrived in Hungary.

Shortly afterwards, Cohen's father was ordered to carry out labor service, while the rest of her family, including her mother, brother and grandparents, hid in their home.

"During those days of shortage and extreme pressure I was comforted by my conversations with the doll, that I did not name," says Tzipi.

She admits that she did not just talk to the doll but that the doll actually saved her life. When the Jews of Hungary began to be sent to their deaths, the Red Cross opened its doors to Jewish children, and Tzipi's mother left her in their care – along with the doll.

Cohen did not like her temporary home and after "consulting" the doll, she decided to run away and try to find her way home. Cohen got lost in the dark and fell asleep on the sidewalk, and in the morning someone took her and the doll home.

The children who stayed at the Red Cross that night were taken by Hungarian soldiers and thrown into the Danube River, where they perished. 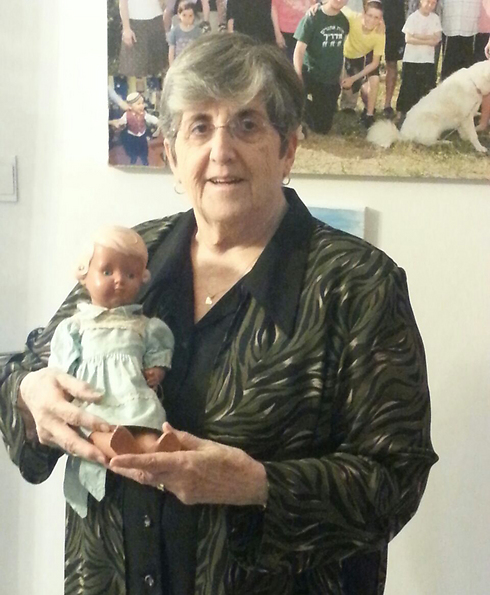 Tzipi Cohen and the doll that saved her life during the Holocaust (Photo: Shem Olam Institution)
Cohen's immediate family survived the Holocaust, however not all of her relatives survived. Now, more than 70 years on, Cohen is living in Israel, and has two children and more than 10 grandchildren. She became a nurse and even taught at nursing school. "It was very difficult for me to separate from the doll," she says. "The doll has been in my possession ever since I can remember, and accompanied me everywhere I went. She will never be just a 'doll' but rather a memento that tells the story of how I was saved, alongside the story of my family and the Jews of Europe who were killed by the Nazi enemy." When asked why she decided to donate the doll to the institute rather than pass it on to her grandchildren, Tzipi says: "I know that at the institute my story will be preserved for the next generations; there is nothing better that will protect my story." The "Shem Olam" Holocaust institute's education department has already begun working on a book about Cohen's story, meant for elementary school students.

Rabbi Avraham Krieger, who heads the "Shem Olam" organization which collects the stories of Holocaust survivors said: "Cohen's rescue story echoes the story of many Jews whose spirits held in a moment of truth, and managed to escape at the last second from the grip of the Nazi enemy.

"In the absence of her parents, Tzipi 'listened to her doll's suggestion' or in essence, her gut feeling, and found a safety line. The 'conversations' with the doll are an example of her personal struggle to maintain composure within an evil reality that had no logic. The institute will continue to be a magnet for Holocaust stories that have been kept framed in the hearts of survivors for the next generation."