Orthodox Jews in the US will be pleased to discover that marijuana will soon be deemed kosher.

Rabbi Moshe Elefant, COO of the Orthodox Union’s kosher certification agency, said that the Orthodox Union had previously denied a request to authorize a kosher certification for cigarettes because of the health risks associated with smoking; however, because of research findings that showing the medical benefits of marijuana usage – authorizing a kosher certificate for marijuana should not be a problem.
Seal of Approval
Rabbis: Medical marijuana kosher on shmita year
Akiva Novick
Religious Zionism leaders say patients can continue consuming cannabis during year in which land in Israel must lie fallow.
Rabbis: Medical marijuana kosher on shmita year

Elefant said he has held "preliminary discussions" with several companies interested in obtaining a kosher seal of approval for medical marijuana.

Rabbi Avi Berman, CEO of the OU in Israel, confirmed the news to Ynet: "A company that grows medical marijuana made a request to receive a kosher certification.

Berman also wished a "full recovery" to those in need of the medication. 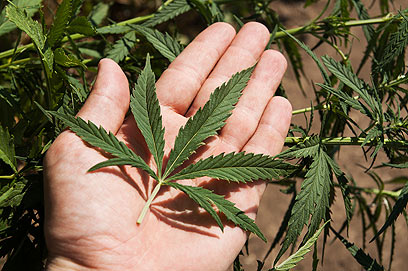 Marijuana leaf (Photo: Shutterstock)
The US has undergone a complete revolution in terms of the social acceptability and legality of marijuana use for both medical and recreational purposes. About half of American states have authorized the use of marijuana for medical purposes; in 2012, Washington and Colorado legalized marijuana for all consumers ages 21 and up – even without a prescription. In an interview with Barbara Walters on ABC news, Barack Obama said that recreational users of marijuana in states that have legalized the substance should not be a "top priority" of federal law enforcement officials prosecuting the war on drugs. "We have bigger fish to fry," said Obama in the 2012 interview. In terms of Jewish orthodox law, there should be now problem with authorizing a kosher certificate for Marijuana because it is a plant, and just as all plants that grow in the US, Jewish laws regarding Shmita do not apply to them. When cannabis is in its natural form, it is Kosher for consuming or smoking. However, in an interview with "Cannabis" magazine Rabbi Hagai Bar Giora, a senior rabbi of the Chief Rabbinate, stated that cannabis seeds are legumes and as such, just like chickpeas and corn, are not kosher for Passover for Jews who follow Ashkenazic customs. On the other hand, Sefardic Jews will be able to continue smoking marijuana during the Passover holiday, according to a tradition that began centuries ago which permits Jews of Spanish origin to eat legumes on Passover. Ephraim Zelmanowicz, the chief rabbi of Mazkeret Batya, located in central Israel, and the author of the book "Alcoholism and drugs in Judaism," has clearly stated in the past that the use of cannabis for medical purposes is kosher and allowed according to Jewish law. He also demanded doctors ease their restrictions for cannabis use for cancer patients and patients suffering from other severe illnesses in order to ease their pain and improve their health. Despite his more relaxed position regarding marijuana use for medical purposes, Rabbi Zelmanowicz still maintains that he is strongly against the use of drugs and alcohol for leisure and that his stance is in accordance with Jewish law.

It is important to note that several leading orthodox rabbis have begun condemning the smoking of cigarettes – despite the common use of cigarette smoking among rabbis and the orthodox community in Israel.

The rabbis who condemn cigarette use base their claim on a bible commandment which states that a person should protect himself from physical harm. Thus, according to the commandment, the use of drugs for enjoyment is prohibited.