Iran's Guard attacks mock US carrier in drills near strait

Iran's Revolutionary Guard launched large-scale naval and air defense drills near a strategic Gulf waterway on Wednesday in which dozens of speedboats swarmed a replica of a US aircraft carrier while missiles fired from the coast struck mock-up American aircraft. The drill, named Great Prophet 9, was held near the Strait of Hormuz, through which one fifth of the world's oil passes. Iran's regular army carried out naval drills near the strait in December.

State TV showed footage of missiles fired from the coast and the speedboats striking the mock US carrier. The drills, which also included shooting down a drone and planting undersea mines, were the first to involve a replica of a US aircraft carrier.

"American aircraft carriers are very big ammunition depots housing a lot of missiles, rockets, torpedoes and everything else," the Guard's navy chief, Adm. Ali Fadavi said on state TV, adding that a direct hit by a missile could set off a large secondary explosion.

A ceremony marking the exercises was attended by commanders of the Guards, an influential military force led by anti-Western hawks, as well as by parliament speaker Ali Larijani.

"With attention to the situation in the region, we have noticeably expanded the defence budget of the armed forces to ensure the stable security of the region," Larijani told a news conference before the exercises, according to Fars News.

At one point a camera from state TV panned across a banner which read "If the Americans are ready to be buried at the bottom of the waters of the Persian Gulf - so be it", a quote from Iran's first Supreme Leader, Ayatollah Ruhollah Khomeini.

The Guard's chief commander, Gen. Mohammad Ali Jafari, said the drills send a "message of (Iran's) might" to "extraterritorial powers," a reference to the United States.

Jafari added that Iran has exceptional abilities that it does not want to use in practice, but that if it became necessary, Iran has complete control of the Sea of Oman, the Straits of Hurmaz and, the Persian Gulf, and that they were in range of Iran's missiles and ships. 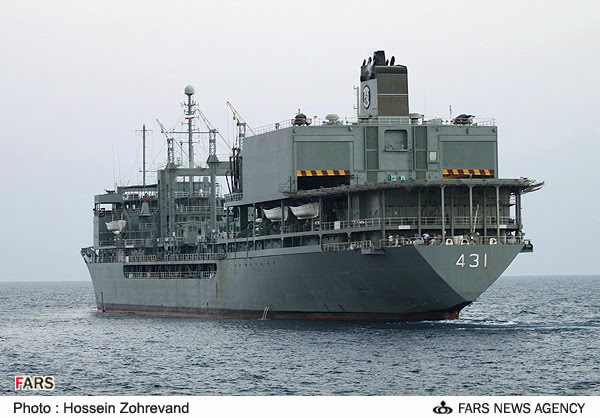 Iranian navy vessel (Archive)
Iran is currently negotiating an agreement over its disputed nuclear program with the United States and five other world powers. The two sides hope to reach a framework agreement next month and a final deal in June.