Netanyahu: US-Israel ties stronger than ever

WATCH: Speaking to AIPAC ahead of Congress speech, PM devotes most of address to stressing that 'friendship between US and Israel grows stronger and stronger.'

Prime Minister Benjamin Netanyahu addressed the America Israel Public Affairs Commitee annual conference in Washington DC on Monday, in the first of two major speeches during his visit to the US. "Reports of the demise of Israel-US relations are not just premature, they're wrong," he told the assembled delegates.

"You're here to tell the world that our alliance is stronger than ever," Netanyahu added and said that the relationship between the two countries "is going to get even stronger in the coming years." 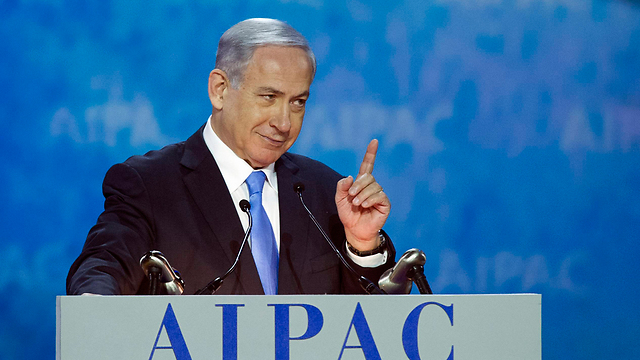 "My Congress speech not intended to show disrespect to Obama or the office that he holds," the prime minister said, in response to criticism of his US visit two weeks before the Israeli elections.

He emphasized that "America and Israel are more than friends, we are like a family. Disagreements in the family are always uncomfortable but we must always remember that we are family."

As the leader of the Jewish State, Netanyahu claimed he had a duty to warn of threats to the Jewish people. "The days in which Jewish people are passive in the face of those who want to annihilate us are over."

The second, and more controversial, is his speech Tuesday to Congress, in which he will decry the agreement currently being formulated between Iran and the world powers over the former's nuclear aspirations.

"Despite occasional disagreements the friendship between the US and Israel grows stronger and stronger, decade after decade, and our friendship will weather the current disagreement as well. Because we share the same dreams, because we pray, hope and aspire to that same better world," Netanyahu told the AIPAC delegates. 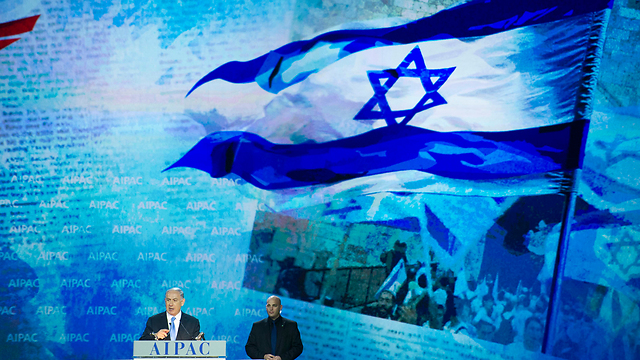 The speech to a joint session of Congress, following an invitation issued by Republican House Speaker John Boehner, was planned without notifying the White House, something seen as a major breach of protocol.

Critics have accused Netanyahu of seizing the opportunity to boost his own chances in the on March 17 elections in Israel, and indeed a Likud MK said Sunday that the party was hoping the speech would have a positive impact domestically. Netanyahu has also come under fire for further straining an already tense relationship with the American president, at a time when Israel is facing increased international isolation.

The Obama administration, known to have tense ties with the Netanyahu government responded coolly to the plan. President Barack Obama said he would not meet with Netanyahu during his time in Washington, citing the proximity to the Israeli elections, while Vice President Joe Biden and Secretary of State John Kerry are out of the country.