Auschwitz. 'Even the skies were weeping'
Photo: EPA

About 2,000 people, including 200 supporters of country's new radical left ruling party, join together at Thessaloniki's Freedom Square for 72nd anniversary of roundup and transport of nearly 50,000 Jews to Nazi death camps.

Residents of Greece's second-largest city on Sunday placed flowers on train tracks and inside old cattle wagons in solemn remembrance of nearly 50,000 local Jews who were transported to Nazi death camps during World War II.

About 2,000 people joined together at Thessaloniki's Freedom Square for the 72nd anniversary of the roundup and deportation of the Jews. Some held banners that said: "Racism Kills, Let's Learn from History," and "Never Again."

Among them were more than 200 supporters of Syriza, Greece's new radical left ruling party that wants to revive claims for war reparations amid fraught negotiations over Athens' debt crisis with EU paymaster Germany and other creditors.

The crowd then marched to the northern city's old railway station, where the first of 19 trains departed for the Auschwitz-Birkenau concentration camp complex on March 15, 1943.

A locomotive believed to have been used to transport Jews, and four carriages that normally would carry cattle and in which people spent nine days locked up on their way to the extermination camps, were at the station. The crowd laid flowers on the wagons and the tracks. 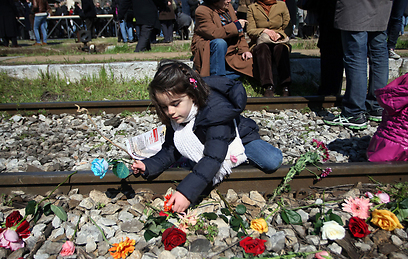 "It was a horrible, mournful, rainy day. Even the skies were weeping," recalled Heinz Cunho, 87, one of fewer than 100 surviving Greek Jews who made it back from the camps. "Normally, the carriages held 50 people. There were 80 of us to a wagon, and they had us locked up throughout the nine-day trip."

"Part of such a locomotive is here today as a reminder of the dark moments and feelings of Thessaloniki residents targeted by the Nazis simply because they were Jews," he said.

Greece's government has decided to include among its demands for German World War II reparations a sum, today equivalent to 50 million euros ($53 million), paid as a ransom to Nazi occupiers in 1942 to free about 10,000 Jewish men used as slave laborers in Greece. They were freed, but still sent subsequently to death camps.

Berlin argues that the issue of reparations to Greece was settled in 1960 as part of an agreement with several European governments.

Jews, mostly Sephardic refugees from Spain and its Inquisition, formed the majority of Thessaloniki's inhabitants from the 16th to early 20th centuries. Their numbers dwindled in the early 20th century.

Of the 46,091 Thessaloniki Jews sent to the camps, 1,950 survived. Others avoided the camps by either joining the partisan resistance or escaping to Turkey by boat, with the help of residents, and making it to the Middle East. Today, the Jewish community in the city of nearly 800,000 numbers fewer than 2,000.

"We are marching upon the footsteps that Greek Jews marched back then. We must remain united and opposed to Nazism, racism and anti-Semitism," said Saltiel.