A 2,000-year-old bronze mask representing the Greek god of Pan was found in an archeological dig in northern Israel on Sunday.

Pan, a God with the body of a man and the hind-legs and horns of a goat, is the shepherd's god, and serves as the hunter in Greek mythology - a figure closely associated with sexuality.
Rare Find
Ancient artifacts found on Ashkelon beach
Itay Blumenthal
Man finds rare mosaic and pottery fragments while running on beach; says that despite reporting it, the Antiquities Authority sent no one to collect artifacts.
Ancient artifacts found on Ashkelon beach

Archeologists working on the Hippos-Sussita excavation site said the effigy was used for religious ceremonies, including those with a strong sexual nature.

"The place was a scene for rites honoring the cave and field gods , and included ceremonies involving drinking, sacrificing and even ecstatic trances involving nudity and sexual relations," said Dr. Michael Eisenberg from the Zinman Institute of Archaeology and heads the site.

The mask was created sometime between the 1st century BC and 1st or 2nd century AC.

According to an excited Dr. Eisenberg, bronze masks of this size, bigger than the human head, are very rare and most do not depict Pan or other mythological Greek and Roman mythological figures.

"Most of the known bronze masks from the Greek and Roman period are tiny. Even the curators of the world's biggest museums who I turned to said they did not know of any bronze masks of the type we found in Sussita," said Dr. Eisenberg. 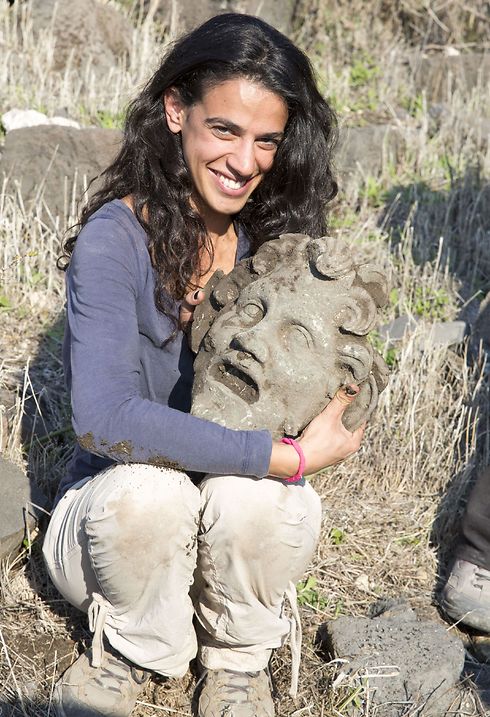 One of the researchers poses with the mask of Pan (Photo: Dr. Michael Eisenberg)
In recent years, the mysteries of Sussita have been unusually revealed. Two years ago, a basalt monument was found with the sculpture of the head and chest of the deceased. Two years before that, the rains of the winter of 2011 were responsible for the random exposure of a statue of Hercules - though these findings seem miniscule compared to the finding of the bronze mask.

The mask was found during a day-long dig that was meant to assess a series of intriguing structures on the ridge of the ancient city, in close proximity to where the main road was located.

The excavation was focused on a basalt structure that researchers believed served as protective storage for the city's catapult. When the researchers found a projectile they understood that it had landed in the ancient city after an enemy force launched it.

The researchers, who were looking for coins with the help of a metal detector, discovered a huge metal block. "We dug out a huge brown block from the ground," said Dr. Alexander Lermolin the director of the conservation laboratory at the University of Haifa's Institute of Archealogy.

"We gently cleaned it from the dirt and began to realize the details: Small horns at the head of the mask hidden between forelocks of hair were the first hints in identifying the mask," said Dr. Lermolin.

"The horns immediately pointed to the fact that it was (a mask of) Pan, the god of goats, who is half man and half goat, and he also represents music and entertainment. After a thorough cleaning in the lab, they clearly identified the size of the goat, the long and pointed ears and other characteristics that led to an almost certain identification," said Dr. Lermolin.

The thought that there was a main altar along the main road to the city is definitely appealing," Dr. Eisenberg summarizes.

"Maybe in a later period, when the city's fortifications were no longer needed, the designated purpose of the building changed and became a ceremonial site for the goat god. Or maybe we have before us a magnificent fountain head or burial sacrifice," said Dr. Eisenberg.