Man finds rare mosaic and pottery fragments while running on beach; says that despite reporting it, the Antiquities Authority sent no one to collect artifacts.

Tomer Menshari, 35, made an incredible discovery while running on the beach in Ashkelon two and a half weeks ago – ancient remains of an ornate mosaic and pottery fragments.

The artifacts were uncovered after a strong storm swept over the area. "Historical artifacts were found in the area before, and I've seen pottery fragments in the past," he said.

But despite the fact he gave the Israel Antiquities Authority (IAA) a detailed report, no inspector arrived. "I left them at the scene, and moved them to a hidden spot so they wouldn't be stolen," he said. "It's a shame that no one from the IAA has come to take it, because someone else could take it, and these could be historic findings." 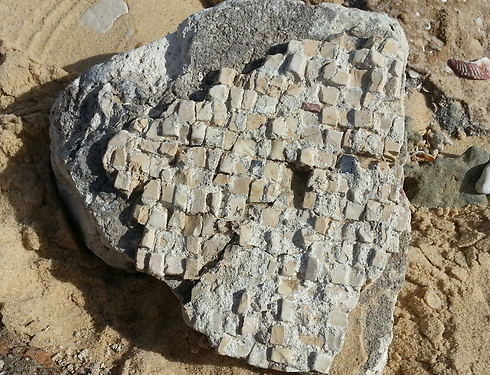 The mosaic found on the beach (Photo: Tomer Menshari)

This was not the first time that a storm led to the uncovering of artifacts on Ashkelon's beach. Four years ago, a passerby discovered a statue of a woman that dated back 2,000 years to the Roman era. The 1.2-meters (about 4 feet) statue depicted a headless woman wearing a toga and sandals, and was apparently broken long ago. 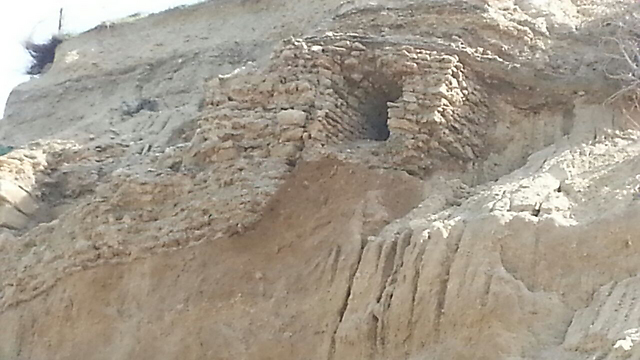 "We have long cautioned people about the condition of the archeological fragments at seaside cliffs throughout Israel and in Ashkelon in particular and regularly monitor, document, and preserve these fragments," the IAA said in response to inquiries about whether they had sent inspectors to the follow up on Menshari's report.

"Recently the state has formed a national steering committee to prepare an overall plan for seaside cliffs, whose goal is to find solutions for the problem and minimize damage. We are currently coordinating with the committee, but we have yet to implement an operative action on the issue."