Injury the girl suffered to her leg
Photo: B'Tselem

The girl was collecting food for family's livestock near the Moshav Ma'on cowsheds when 2 settlers started throwing stones at them; girl lightly wounded from stone that hit her head.

The Judea and Samaria Police was searching on Saturday for two suspects who allegedly threw stones at a 6-year-old Palestinian girl in At-Tuwani, near Moshav Ma'on in the Hebron area.

In a report to the police made with the help of a B'Tselem researcher, the Palestinians said masked men - allegedly Jewish settlers - threw stones and lightly wounded the girl in her head. 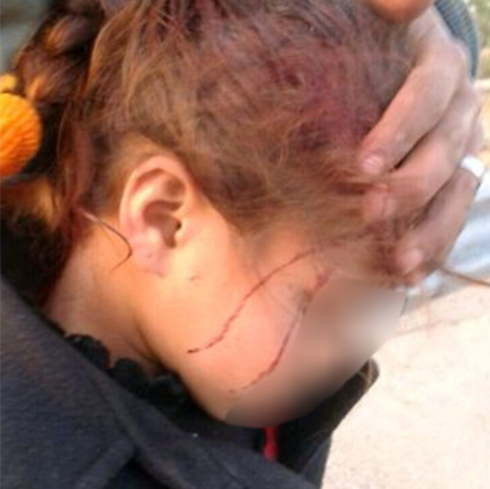 The wounded girl (Photo: B'Tselem)
A Palestinian eye-witness said the wounded girl and another girl at the age of 14 - both from the village of a-Tuba - went to gather food for the family's livestock.

Some 500 meters from the Moshav Ma'on cowsheds, they saw two settlers walking towards them. The two settlers allegedly started throwing stones at the girls to keep them away. Two of the stones hit the 6-year-old girl - one hit her on the head and the other hit her leg. 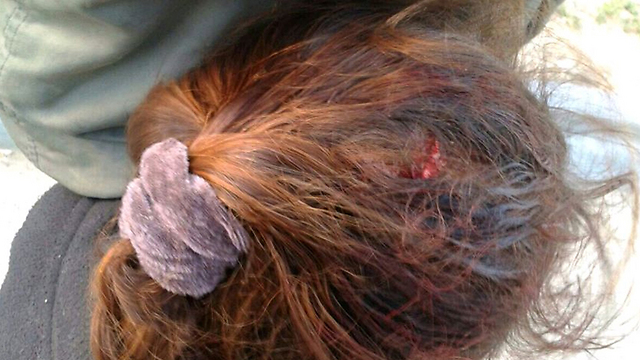 The head wound the girl suffered (Photo: B'Tselem)
The girl was treated at the scene by an IDF doctor, who determined she did not suffer significant damage as result of the stone hit. The soldiers advised the girl's family to file a complaint with the police and the girl's uncle took her to the police station. Hebron area police were searching for the stone-throwers.