WASHINGTON - Former Secretary of State Hillary Clinton said Sunday that relations between the US and Israel ought to return to "constructive footing" and stressed the importance of getting back to "basic shared concerns and interests, including a two-state solution."

In a telephone conversation with Malcolm Hoenlein, Executive Vice Chairman of the Conference of Presidents of Major American Jewish Organizations, Clinton added that, “we must ensure that Israel never becomes a partisan issue".

“Secretary Clinton thinks we need to all work together to return the special US-Israel relationship to constructive footing, to get back to basic shared concerns and interests, including a two-state solution pursued through direct negotiations between Israelis and Palestinians. We must ensure that Israel never becomes a partisan issue," San Diego Jewish World cited Hoenlein as saying.

According to the paper, Hoenlein noted that, “Secretary Clinton’s views are of special importance and timeliness given recent issues in the US-Israel relationship. We note her call for direct negotiations between Israelis and Palestinians, which, we believe, is the only possible route to a true peace.” 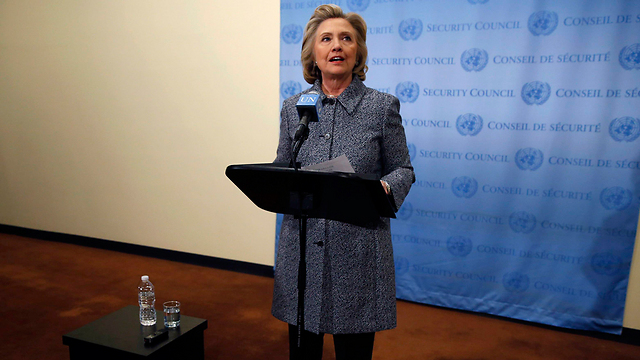 Clinton: "We must ensure that Israel never becomes a partisan issue." (Photo: Reuters)

The comments made by Clinton, who is expected to announce her candidacy for the 2016 presidential election race soon, come at a time of strained relations between the US and Israel. Prime Minister Benjamin Netanyahu has been feuding with the White House over an emerging nuclear deal with Iran, and he has come under fire for comments he made in the final days of Israel's parliamentary election campaign last week.

President Barack Obama's chief of staff recently said the United States can't simply pretend that Prime Minister Benjamin Netanyahu didn't reject the possibility of a Palestinian state, explaining that was the reason the US was reevaluating its policy on Israel.

"We cannot simply pretend that these comments were never made," said McDonough, one of Obama's top advisers, speaking to the liberal Jewish American group J Street Monday.

"Such contradictory comments call into question (Netanyahu's) commitment to a two-state solution, as did his suggestion that the construction of settlements has a strategic purpose of dividing Palestinian communities," he said