The talks in Lausanne
Photo: AFP

The US has sold Israel out with Iran deal

Op-ed: The Lausanne agreement is evidence of just how hard - and successfully - the Iranians fought to preserve the essential components for creating nuclear weapons.

Just guard me from my friends; from my enemies, I'll guard myself. We are forced to learn this age-old lesson each time anew.

The document agreed upon and signed in Lausanne on Thursday by the best of our friends from around the world makes no mention of nuclear development for peaceful purposes. Nothing in the clauses outlined in the declaration of principles indicates that Iran's nuclear program for military purposes will be converted into a program designed to further civilian-scientific objectives.

On the contrary; the document is evidence of just how hard, and successfully too, the Iranians fought to preserve the essential components for creating nuclear weapons. And this is an indication of the strategic importance Iran attributes to its military nuclear program, and the price it is willing to pay to protect it. 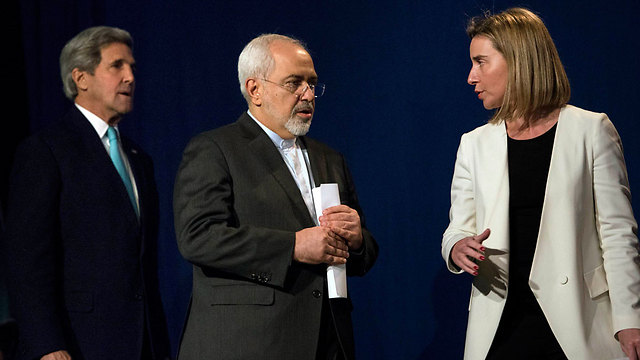 The bottom line: Iran has agreed to restrict its number of uranium-enrichment facilities – or, in other words, not to build new ones. The existing facilities will continue to operate at a slower pace, under supervision: 5,100 centrifuges will be in operation in Natanz, and an additional 1,000 will turn at a facility in Fordow that will be classified as a research institute (Yeah, right!). The stockpiling of enriched material will also be restricted. But nowhere in the agreement is there anything about ballistic missiles, nuclear warheads or military R&D.

In return, the sanctions on Iran will be lifted gradually. The International Atomic Energy Agency (IAEA) will be responsible for dictating the pace of the lifting of the sanctions. The Iranians haven't manufactured a bomb until now; so they'll hold back a little longer, for as long as it is worth their while.

The second conclusion coming from the agreement achieved in Lausanne is supposed to offer some comfort. If the Iranian nuclear program does indeed remain under tight supervision throughout the term of the agreement, it's safe to assume that Iran will not be able to turn its nuclear capabilities into a nuclear weapon overnight.

All this is under the assumption that the Iranians play fairly and don't cheat; and that if they do decide to break the rules, we will have at least a one-year warning before they can produce a bomb. Anyone who believes that we can sleep soundly at night with this conclusion in mind must the simple of the Four Sons mentioned in the Passover Haggadah.

So Iran has agreed to reduce its stockpile of 3.67-percent low-enriched uranium to just 300 kilograms; has agreed to allow inspectors access to the supply chain that supports Iran’s nuclear program, from the mining of the uranium and through to the completion of the enrichment process; and has agreed to dilute its surplus quantities of uranium – a lot of declarations that could give the impression that the Iranians really were squeezed.

But these declarations have to be backed up by particulars, which don't exist now and probably never will. There's a clause, for example, that restricts the use of new centrifuges over the next 10 years, but it says nothing about restricting the development and production of new and improved centrifuges that can be put into motion the moment the time comes.

Still unclear too is the nature of the IAEA's mechanism for that tight supervision that US President Barack Obama defined as "unprecedented," or if the UN Security Council can automatically reinstate the sanctions if Iran violates the agreement. One thing is clear: Once Iran returns to the family of nations, it will be very difficult to again enlist the world to impose sanctions on Tehran.

There is nothing surprising in the Lausanne agreement. The talks over the last few days were for show only. The Americans knew, just as Israel did, that the Iranians had been willing to sign the current version of the agreement, and an even-worse one from their perspective, already two months ago. And yes, the agreement restricts Iran's nuclear capabilities for a certain period of time. But it is a vague document that lacks numerous essential details, just like the Iranians wanted – a document they can hold up in triumph to their people.

The Iranian representatives conducted the negotiations like true professionals and ran rings around the American secretary of state. In his speech on Thursday, Obama gave Kerry a grade of "Excellent" for his persistence and patience. But anyone who was there knows he deserves a grade of "Unsatisfactory" in negotiation management. And this holds true not only with respect to Iran, but also vis-à-vis the Israeli-Palestinian conflict.

Our friends in Washington have sold us out, along with their other allies in the Middle East, for a pittance.