Analysis: Putin's decision to lift the ban on sales of S-300 missile defense system to Iran is a reminder that Israel and the American administration are in the same boat, and that it may be time to stop rocking the boat and start to seriously talk to the captain.

If Iran had operational S-300 missiles today, and Israel decided to attack Iran tomorrow morning – it would have been a totally different ball game due to a much higher hurdle than the one the Israel Air Force faced in Operation Opera, which destroyed the nuclear reactor in Iraq. But the Iranians don't have such missiles at the moment, and probably won't have any in the next two-three years.

Meanwhile in Israel, which failed to strike in Iran in the 10 years it could have done so, there doesn’t seem to be anyone who will make such a decision in the foreseeable future.

So we can, allegedly, calm down. But reality is much more complicated: We are in the midst of a growing international crisis and are beginning to feel its collateral damage.

First of all, we have a political story here which marks the collapse of the Iran sanctions regime. While an agreement between Iran and the world powers has yet to be signed, the Russians have already given the American administration and its allies a hard slap in the face.

The Kremlin announcement arrived while a high-ranking Iranian security delegation – led by the chairman of the Iranian parliament's Committee for Foreign Policy and National Security, Alaeddin Boroujerdi, and the secretary of Iran's Supreme National Security Council, Ali Shamkhani – was visiting Moscow. This serves as further proof that the Iranians and Russians have long-term plans to tighten their relations and resume their security cooperation, including arms sales. 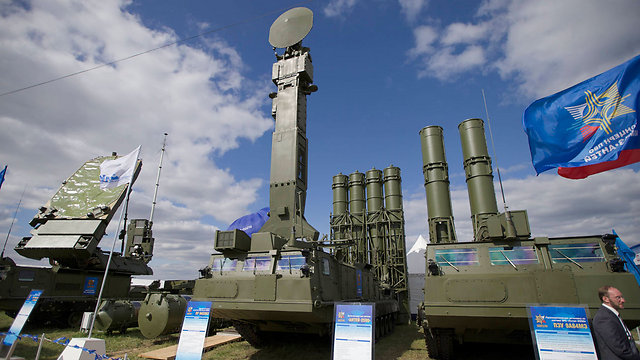 Our problem isn't in finding solutions for dealing with S-300 missile system, our problem is in the leadership area (Photo: AP)

And if that were not enough, Moscow is linking the timing of the declaration to the crisis in Yemen, where the Russians are standing by the Iranians and Houthis with an oppositional policy against the Americans. Russian officials believe that the conflict in Yemen will eventually lead to a direct clash between the Iranians and the Saudis, which will lead to a Saudi attack on the Iranian nuclear facilities, and are therefore providing the ayatollahs with a modern aerial defense system.

As far as the United States Fifth Fleet is concerned, the possibility that the Iranians will possess S-300 missiles and the Saudis will be involved in an aerial conflict poses a much more concrete threat to the American aircraft carriers in the Persian Gulf than to Israel.

And so, while Prime Minister Benjamin Netanyahu is trying to rock the American administration's boat and is hardly succeeding in creating a few waves, the Russians have come along and reminded us that we and the Americans are in the same boat – and that when water enters that boat, we are the first to get wet because we are lower in the hierarchy. Therefore, it may be time to stop rocking the boat and start to seriously talk to the captain.

The Iranians will likely not receive the S-300 soon, as the model they have ordered, which was adjusted to their operational needs, was dismantled in 2011. The Russian company no longer manufactures that model, and its production lines are now producing more sophisticated S-400 missiles. The Russians are essentially planning to remove the S-300 missiles from their army, give them to the Iranians and take in S-400 missiles instead, but the S-400 production line is slow and it will take time before they accumulate the required stock. It is possible, however, that the Iranians already have the Chinese version of the S-300.

From an operational point of view, we are talking about an advanced weapon system which operates in ranges and heights that the Air Force has yet to deal with. We can assume that in the middle of the previous decade, when the deal to sell S-300 to Iran and Syria was on the agenda, Israel began preparing for this threat in terms of combat doctrines and technologically – but as long as we have not seen this missile's real performance and have not been exposed to its weaknesses, we should expect surprises.

So far, the protected area was in a relatively narrow range of 20 to 30 kilometers, but the S-300 model offered to the Iranians provides a protection range of 150 kilometers. The Air Force will have to be able to locate and disrupt the radar and the missile and develop designated combat doctrines. That requires time and money, but as long as we are talking about professional issues which engineers and pilots should be able to solve, solutions will likely be found. Our problems are in the leadership area.