Nina was born in San Francisco, Rachael in South Africa; now they find themselves protecting Israel’s northern border – what leads two talented young women to leave their comfortable lives for rough service in the IDF?

Nina, 23, was born in San Francisco to a Jewish mother and an Iranian father, but she has always dreamed of moving to Israel. Rachael, 20, grew up on a pineapple farm in South Africa to Jewish parents; at the age of 18 she packed her bag and also moved to Israel.

Today, both serve in semi-combat roles in the IDF as "lone soldiers", each "adopted" by local Israeli families from a kibbutz in the north, where they are stationed, watching over Israel’s border. The kibbutz is only 50 meters from Israel’s border with Lebanon. They live there with over 15 other lone soldiers from Germany, Australia and Italy. 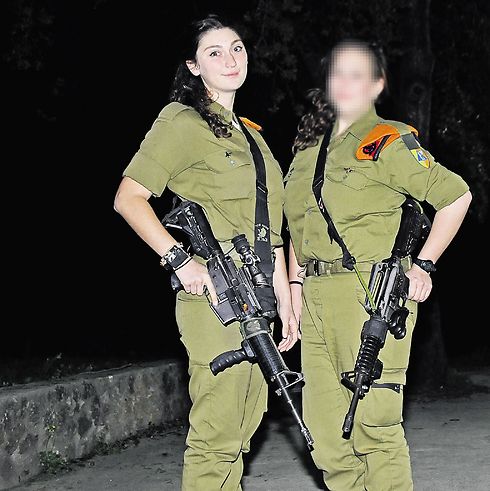 Their biological parents have grown accustomed to receiving pictures of their daughters armed with M4 rifles and in full IDF regalia – minus the coat of course, as true combat soldiers never put on their coats, even in winter.

Though Iranian by nationality, Nini’s father wished her well when she told him she was moving to Israel to join the army. “’Just do what you want in life and thrive’ he told me,” Nina recalls of her father, who she says still lives in Iran.

Her mother wasn’t too surprised either: “She volunteered on a kibbutz and her brother also spent a year and a half here. It was hard for her that I left home, as I’m the youngest in the family and we’re close, but she’s happy I’m here because I’m doing something special and important.”

She was already in the middle of her masters in sociology and anthropology when she visited Israel for the second time, as part of US Jewish youth program, which also brought her to India, Portugal and Uganda.

“If felt Israel was my home… not a day goes by in which that decision is not reaffirmed,” she says proudly.

“Somebody in the street will say ‘good for you’ when they see me with my rifle, they want to take a picture with a female combat soldier; a little girl came up to and said ‘happy holidays.’

“These aren’t the types of things that happen in the US. People here are beautiful and nowhere in the world is there anything like a kibbutz,” she explains.

“People usually don’t question why they live where they live – I wake up every morning and know I have chosen what’s best for me. People spilled their blood so we would have a country.”

Are you ever afraid?

“When I’m in uniform, I’m never afraid. I know exactly what I’m supposed to do. But during Operation Protective Edge, we were called up to a base in central Israel where we needed to answer civilian’s questions. Those were the toughest two weeks of my life, because I heard the fear in people’s voices,” Nina recalls.

Rachael knew she would join the IDF at the age of 11, but only after she left South Africa to visit Israel at the age of 16 did she know for sure. She was a lifelong member of the local Jewish community in Port Elizabeth, where her mom cooks kosher food for the synagogue.

“In South Africa military service is not mandatory, and because I am Jewish I thought that if was going to join the army, then it will be Israel’s. I have two older brothers who didn’t enlist, so my mom had a hard time finding out that her little girl was a fighter.

“Both my mom and dad spent a short time in Israel on a kibbutz, but my story is different – I came to enlist,” she said.

“My ambition to be a combat soldier in the IDF was very strong. When I showed up at the enlistment center I told them that if I don’t get sent to combat training I’ll get married and leave,” she says. In Israel, married women are exempt from military service.

Nina and Rachael serve in different battalions in the north, but both underwent the same eight month training program, specializing in search and rescue operations.

“I won’t lie and say that it's always amazing in the IDF. Even for Israelis it’s not easy. But it’s an experience like no other. It builds your character. It’s just so different from where I came from. In the US, young people are only responsible for themselves. If they fail, it’s their problem. Here, they are given guns and make sure the country is safe,” Nina said.

Rachael agrees, but says “it works both ways. If I didn’t do something, then I have to answer for it. Anyway, I just say that I didn’t really understand the order,” she jokes, referencing her Hebrew.

Nina laughs agreeing: “I also made a ton of Hebrew mistakes. Every time we had to disarm our rifle, we were supposed to yell out in Hebrew. One time, in front of everyone, the company commander disarmed his rifle and said ‘five fingers on the handle’ and I shouted ‘five fingers on the bra’ (the Hebrew word for brassiere is similar to the word for handle).”

Nina recalls the time her mom visited for her "barrette ceremony" – the end of training ceremony in which soldier get their company barrette.

“I saw on her face that she was finally beginning to understand what I was going through. I told her: Mom, I have everything I need here. This is my life, these are my friends. I want to form a family here, with an Israeli husband and kids who speak perfect Hebrew. I want to live in Tel Aviv or Jerusalem, but a kibbutz is also a decent option.”