Some 15 MDA paramedics fly out to disaster struck area to help Israelis caught in earthquake and assist locals as death toll from quake reaches 2,000.

A Magen David Adom delegation left Israel for Nepal on Sunday morning to help Israelis caught in the earthquake and assist locals after a powerful earthquake struck the region Saturday, triggering an avalanche on Mount Everest.

Some 15 paramedics flew out this morning, while the organization was examining the possibility of sending out a larger team that could remain in the country for a longer period of time. 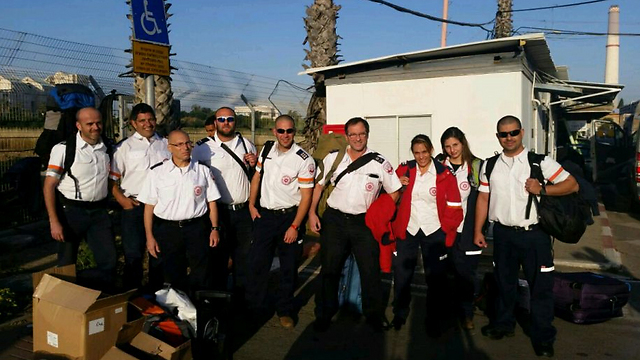 Some 200 Israeli backpackers currently in Nepal have yet to make contact with their families, but the vast majority of the Israelis in the area are not in danger, the Foreign Ministry said Sunday.

The Foreign Ministry is working alongside Nepalese officials to rescue 68 Israelis who were trekking in the Langtang area before the quake occured. At this point, there was no information on any Israeli casualties in the disaster.

A Nepal police official says at least 2,000 people have been killed, including at least 721 in Kathmandu, in the immense weekend earthquake centered outside of the capital of the Himalayan nation.

After the strong quake hit the area, Magen David Adom decided to send a delegation of doctors and paramedics, in coordination with the International Committee of the Red Cross. The team set out in a special plane equipped with medicine, medical supplies and baby food. They intend to stop at the Chabad House in Kathmandu, where many Israelis –both adults and infants – took refuge.

The team should remain in the country for at least two weeks, but the exact duration of their stay will be determined by the number of wounded individuals. 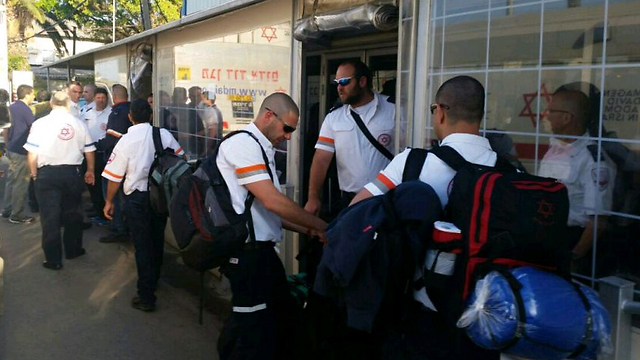 Photo: Magen David Adom Spokesperson
"Our mission consists of three parts: first of all, reach the Israelis that are there and see with our own eyes that there aren't any wounded, give first aid if necessary, and see that all is well," said Dr. Rafi Strugo, Director of the MDA Medical Division.

"Our second mission is to establish a first aid station where the team will provide treatment for the first 48 hours, and provide pain killers, antibiotics, bandages, as well as classify the more severely wounded and see how we can evacuate them to the hospital." 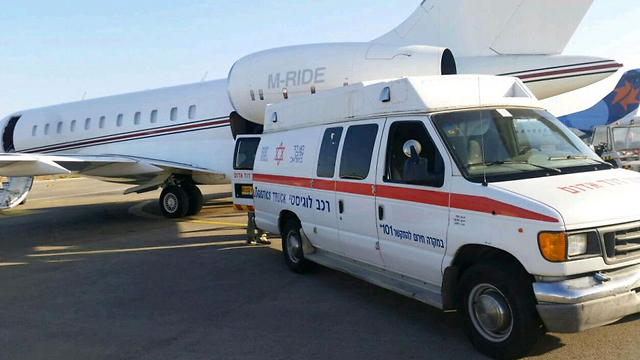 "The third task is to map out the additional needs in terms of medical assistance for what is known as the second wave – the larger delegations that usually arrive after three or four days and open a field hospital."

Magen David Adom has provided medical assistance to victims of medical disasters in many parts of the world. "We have extensive experience," said Dr. Rafi Strugo. "We organize the equipment, manpower, talk with the authorities, and unfortunately perform this procedure about once a year. We joined rescue efforts in Sri Lanka and Haiti, after the earthquakes, and in Burgas after the terror attack."

Michael Zurin, an Israeli backpacker currently in Kathmandu, Nepal's capital, said: "It feels like Yom Kippur here. Everything is closed. You can barely get a bottle of water of here."

Zurin added: "We're trying to help as many people as possible trapped under the rubble. As far as I understand, most of the Israeli are either at the Chabad House or at the embassy."

"It's a mess here and the atmosphere is very stressful," Zurin said. "I miss my parents and friends. I'd be happy to come home as soon as possible. But they shouldn't worry – I'm completely fine, safe and sound. "

Rabbi Chezki Lifshitz, a Chabad representative to the country together with his wife Chani, told the Chabad Lubavitch Community news site that “the buildings in Nepal shook, the wind was blowing buildings like paper in the air. Houses are unsafe and the electricity is out. The sight is horrific—many are walking around with open wounds.”

“Many are in towns where there are no standing houses due to the earthquake,” the rabbi said.

“I am calling on anyone in Nepal to not sleep in any buildings, they are not safe and may fall during the aftershocks,” Chani posted on her Facebook page, according to the site. Also on Sunday, some 240 soldiers and officers will take off from Israel to Kathmandu to assist search and rescue efforts.

The delegation will include medical experts and aid workers and will set up a field hospital in the ravaged capital. The primary focus of the team will be to locate and assist the many Israelis stranded by the quake who have yet to make contact with their families.

The Israelis will depart in two planes and stay in Nepal for at least two weeks. The site where the delegation will deploy has yet to be announced and will be decided on Sunday after consultation with an IDF team which took off to Katmandu from Nevatim Airbase on Saturday at midnight.

The first-responder crew includes seven medical, logistics, and rescue officers from Home Front Command and will join up with the local authorities when it lands in Nepal to determine what priorities the Israeli delegation should set in their aid efforts.

Many Israelis traveling in Nepal were confirmed safe on Sunday morning following the devastating earthquake that struck on Saturday, according to the foreign ministry. However, some 250 Israelis were still considered "out of reach".

The Israeli Foreign Ministry opened a situation room to aid Israelis in Kathmandu. Several Israelis were lightly injured in the deadly earthquake in Nepal according to the Foreign Ministry. Hundreds of Israelis arrived at the Chabad House in Kathmandu, where some of them received medical treatment from backpackers who served as medics in the IDF and from local volunteers. They were later moved to the Israeli Embassy. 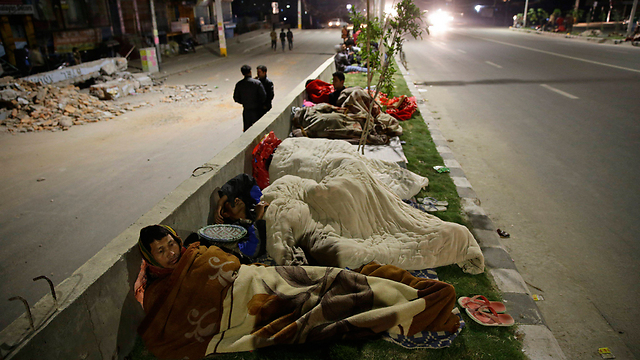 People sleep on a street in Katmandu (Photo: EPA)

In addition to the Israeli backpackers, there are dozens of Israeli families currently in Nepal with 24 newborns babies, some premature, born to surrogate mothers, who are desperate to get their children out of the country.

A premature baby born from a surrogate Nepali mother to Israeli parents was in serious condition due to the lack of oxygen after the hospital she was hospitalized in suffered damage from the earthquake, but has since received oxygen and evacuated to the Israeli Embassy in stable condition.

Tens of thousands of Nepalese who spent the night under a chilly sky were jolted awake by strong aftershocks Sunday, while rescuers aided by international teams cleared rubble in search of survivors. 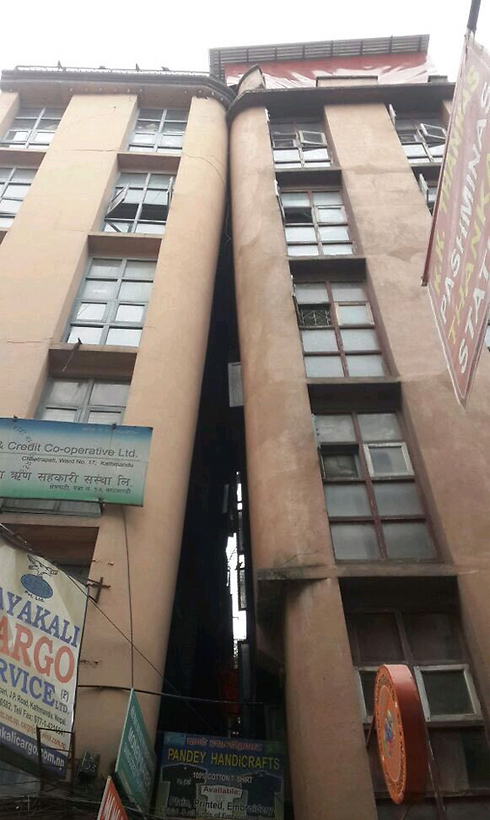 The number of casualties is expected to climb as reports come in from far-flung areas, said Home Ministry official Laxmi Dhakal. Among the dead are 17 who were struck by a quake-triggered avalanche on Mount Everest that buried part of the base camp packed with foreign climbers preparing to make their summit attempts. At least 5,000 people were injured across Nepal. 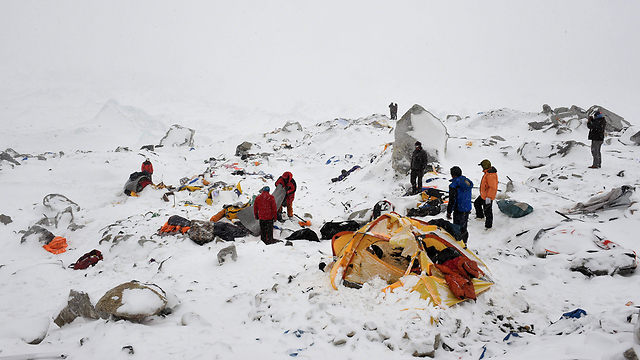 Everest Base Camp on Sunday, a day after an avalanche triggered by a massive earthquake devastated the camp (Photo: AFP)

Saturday's magnitude 7.8 earthquake, which was centered outside Kathmandu, the capital, was the worst to hit the poor South Asian nation in over 80 years. It destroyed swaths of the oldest neighborhoods of Kathmandu, and was strong enough to be felt all across parts of India, Bangladesh, China's region of Tibet and Pakistan.