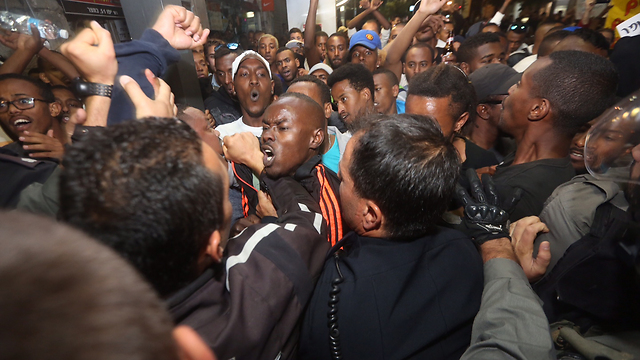 Fearing the violent clashes during Thursday's protest in Jerusalem did not serve to promote their cause, Israeli Ethiopian activists prepare to continue struggle in Tel Aviv on Sunday.

The Israeli Ethiopian community has been organizing another demonstration, scheduled for Sunday in Tel Aviv, saying the violent protesting in Jerusalem on Thursday night did not serve to promote their cause.

"It's not a good thing there was violence and injuries on both sides, but people need to understand we're facing a problem that needs to be addressed and resolved after dozens of years of inequality and racism," said a prominent activist from the Ethiopian community on Friday.

Safinau Malako, who lives in an absorption center in Mevaseret Zion, said the current struggle of the Ethiopian community in Israel must lead to different results than in the past.

"We've had struggles that ended without results, and this time we have to continue and not stop until the society and politicians wake up. This situation cannot continue. We're Israelis just like everyone else. A large portion of Israeli Ethiopians were born here and they deserve their rights," he said.

Violent protest in Jerusalem (Photo: Gil Yohanan)
After protests in Jerusalem got out of hand and led to clashing between demonstrators and police, Police chief Yohanan Danino instructed the team looking into claims made by Israeli Ethiopians of police brutality to work faster. Police officials said the team, which was formed on Thursday, will formulate its conclusions and recommend ways of action in the coming days.

Danino praised the police forces who secured the Israeli Ethiopian community's protests in Jerusalem on Thursday, vowing he "would not let one extreme case or another hurt the entire organization."

Police forces face Israeli Ethiopian protesters in Jerusalem (Photo: Gil Yohanan)
He stressed following the violent protests on Thursday that the police would not allow further violations of law and order. Danino decided to fire the police volunteer who violently assaulted an IDF soldier of Ethiopian descent this week, pending a hearing. Forums of the Israeli Ethiopian community have been filled since Thursday with stories from protesters. Some of the protesters told of Yasam policemen of Ethiopian descent who refused their commanders' request to go undercover during the protests, and of IDF soldiers of Ethiopian descent who came to protest in their uniform even though they were forbidden to do so by their commanders.
Plight of Ethiopian community
Ethiopian Israelis describe long history of discrimination
Omri Efraim, Roi Yanovsky
A video depicting a police officer brutally beating an Ethiopian-Israeli IDF soldier for no visible reason sparked outrage in the Ethiopian community; several describe similar instances - the only difference was there was no camera to document them by chance.
Ethiopian Israelis describe long history of discrimination

Sion Abuna, a 25-year-old Israeli Ethiopian student at the IDC in Herzliya, told Ynet: "People are very proud of what happened. Many in the community realized that together we have power and that only that way we could cause people to wake up. I've never been as proud as I was on Thursday, not even when I finished officers' course in the IDF and not even when I finished my army service."

Protesters in Jerusalem (Photo: Gil Yohanan)
Young activists in the Israeli Ethiopian community criticized older activists who are willing to cooperate with the authorities and the police in an attempt to prevent the next protest or tone it down. The older activists decided not to take part in the organization of the protest on Thursday out of concern the protest will become violent, the fears having since become reality. Former Miss Israel Yityish "Titi" Aynaw, who is of Ethiopian descent, commented about the protest on her Facebook page, saying: "Unfortunately I was exposed to the injustice of the police backing the violent policemen who assaulted an innocent man. I'm sorry I could not participate in this just protest," she wrote. "How long are we going to continue having this silly discrimination? Are you aware of the fact we're in the 2000s? How can a policeman (a loaded word) take the law into his own hands and beat up an innocent man, and behave as a beggar on horseback? I saw the video and I was shocked. I send the soldier get well wishes and take this opportunity to salute him. In conclusion, I'll just say that I, as an officer in the IDF, am proud of being Ethiopian and proud of our community that is fighting for justice!"