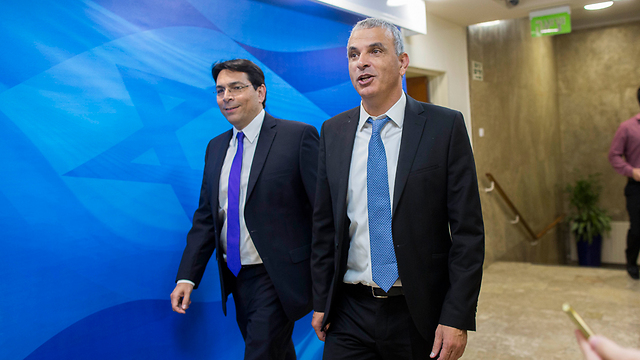 When the government seems temporary, the system can't function

Op-ed: The great concern regarding the current government is that with the feeling of impermanence conveyed by the prime minister, new ministers like Moshe Kahlon will have no chance of getting anything done.

Last week, I attended the farewell ceremony for Harel Locker, the director-general of the Prime Minister's Office. We first met at the prime minister's bureau. I was very impressed by him, but he had just arrived and I was already gone. We remained friends.

Former government members and members of the next government arrived at one of the Foreign Ministry auditoriums, where the farewell event took place. Regional council heads and managers from the public sector, who he had worked with, sat in the back. While the finest political engineers were trying to put together a government, at Locker's event everyone spoke with everyone, shook hands, smiled and politely ate crackers.

"It's a shame it's over," one of the southern council heads said to me. "Look at how well they get along." Who are you referring to, I asked.

"The former ministers of Yesh Atid, Likud and Bayit Yehudi. We know what happened. We have gotten used to it. We don’t know what will happen with the new government, how long it will survive."

When the speeches began, people praised the outgoing director-general: His sense of mission, the reforms, the heavy duties he was tasked with by Prime Minister Benjamin Netanyahu, and mainly the time he spent in this position. The continuity.

New Ministers Moshe Kahlon (R) and Danny Danon. 'When you sit on the same chair for years, you can plan and watch the implementation, obtain budgets and review the way they are spent' (Photo: Yonatan Sindel, Flash 90)

Three and a half years are a rare period of time in Israeli terms. A historic achievement in the eternal people's government. When you sit on the same chair for years, you can plan and watch the implementation. When you are in the same position, you can obtain budgets and review the way they are spent. You can be serious.

And this is the great concern regarding the current government. After all the cries and lamentation over Miri Regev's appointment as culture minister (who has already taken an important step in moving her ministry to Jerusalem), Ayelet Shaked's appointment as justice minister and Danny Danon's appointment as minister of space and galaxy – the fear is that these ministers will not be able to fully assume their duties; that they will only arrive and will already have to leave, as short as a season.

And if space doesn’t concern us and if culture has nothing to do with the minister's identity, there are some new ministers who have no chance of getting anything done without some time in office. This applies to Finance Minister Moshe Kahlon's reforms, which are already facing empty coffers due to coalition constraints, and to the plans regarding the housing markets, and dozens of other promises and plans. When there is a feeling of temporariness, the system doesn’t function, regardless of who it is headed by.

Prime Minister Netanyahu sat in the first row in the auditorium and watched his outgoing director-general, without deciding who will replace him. Another task on an unending list.

Whoever got up to speak made sure to praise him as well, and rightfully so. A director-general's achievements are always the achievements of the person who appointed him. But none of those who praised him mentioned the fact that the great election victory seems much smaller when it comes to the coalition's makeup. No one tried to understand if Netanyahu really wants a "61 plus" government, as he had said, or a narrow government. And anyway, if he wanted to keep the Foreign Ministry for Isaac Herzog (which is why he got into fight with his No. 2, Gilad Erdan), why didn't he do it in the first place? Why there, and then here? Why convey that it's all temporary, and that something is about to happen in a moment? Someone is about to walk through the door, a guest is about to spend the night.

When it the prime minister's turn to say goodbye arrived, he seemed to find the farewell difficult. Not the farewell to Locker – despite his skills, he will learn how to get along without him – but the farewell to the governments he had until now, and mainly the one which was degraded and dissolved. Netanyahu, the man who knows how to speak after taking only one look at the text, the master of words and messages in every place and every time, stood up and spoke absentmindedly, and he did the same when the government was sworn in at the last moment. They were no inspirational speeches from his famous workshop, but speeches which evoke a sense of temporariness.

Netanyahu's time is his big advantage, not because he is competing against David Ben-Gurion's record, but because this is the way to create processes. Without those processes – with an exchange of parties, agendas and ministers – time has no meaning.

I have no idea how long this government will last – for the sake of the State of Israel, we should pray that it will last four years. I do have an idea about the feelings and voices I heard that day.