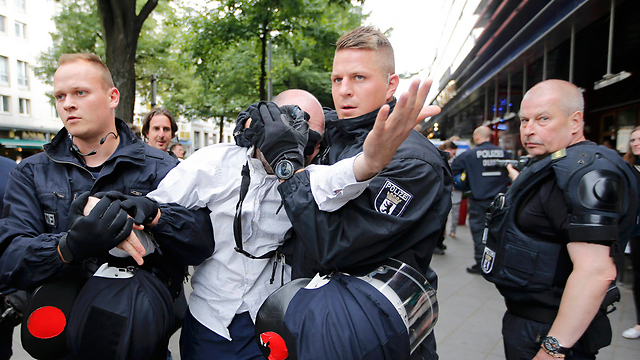 Hundreds marched in Berlin on Saturday in a protest against "the Israeli occupation of Jerusalem" to mark al-Quds Day, a holiday created by Iran on which Muslims are to protest against Israel.

The moment of the arrest (Photo: Reuters)
A counter-protest featured hundreds of pro-Israel demonstrators waving Israeli flags and pro-LGBT activists. A protestor was arrested during a scuffle.

The Israeli embassy in Germany said it was looking into the identity of the arrestee and that the protest had been quiet and calm.

The pro-Israel protest was organized by groups that act in support of Israel in Germany. LGBT groups joined this year to highlight Israel's treatment of that community in comparison to that in the Arab world and Iran.