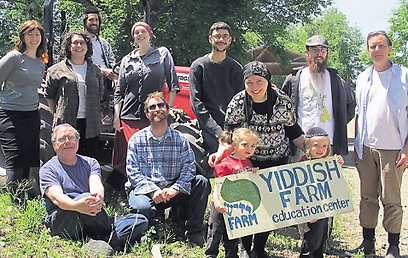 About an hour and a half drive from New York City, in what looks like a regular agricultural farm, young men and women work the land, grow vegetables and sell the crops for a living. The only difference is they only speak Yiddish, preserving the rich tradition their forefathers brought to the US from Europe.

About an hour and a half drive from New York City, far from the crowded buildings and skyscrapers, hides a slightly unusual farm. Between the trees and green fields and open spaces, farmers grow fefer, kartofl, kroyt and different kinds of vegetables and fruit, alongside chickens and goats. You may know these vegetables as pepper, potato and cabbage, but the uniqueness of this farm is in the fact that the only language spoken on it is Yiddish.

For the past four years, Yiddish Farm has been preserving the rich tradition brought from the different European countries by the generation of fathers and grandfathers – a moment before it was suddenly interrupted by the Nazis.

They arrive shortly before summer and team up with Yisroel, who is responsible for the agricultural side. Young Jews from different countries, but mainly from New York and other US states. Most of them grew up in homes where Yiddish is the mother tongue, the first and almost only language in the house, from the days the droshkies (carriages) paved their way between the streetcars in the first third of the 20th century in Poland.

"Yiddish is not a dead language!" says 29-year-old Naftali Ejdelman, the farm's founder. "It's probably a very esoteric language outside the ultra-Orthodox society, but there are people who write books in Yiddish, there are theaters and magazines, and we can’t forget that there are also people who create in this language.

"For me Yiddish is the first language, as it was for each of my family members for centuries. I'm not going back to a forgotten language. I speak in the language that I and each of my family members were raised on. It's who I am. There are many other people on the farm whose family members only spoke Yiddish, and they came here are part of the broad community activity. But there are also those who are learning the language in order to reconnect with the Jewish tradition, as Yiddish has been forgotten in their family."

Naftali Ejdelman and fellow farmers. 'Yiddish is not going anywhere'

While many people perceive Yiddish as a language of elderly people, Holocaust survivors and haredim, Ejdelman and his friends have a different perception. Yiddish was the language in which they first played with their friends, the language in which they read books and studied in school. That is why they are very strict about only speaking Yiddish on the farm. Whoever wants to join them must first study the language and then, after obtaining a sufficiently stable foundation, he comes to live with the rest of the community members."

"The whole idea of the farm was actually a forgotten dream of my grandfather, Dr. Mordkhe Schaechter," Ejdelman explains. "He arrived in the United States in the early 1950s from Czernowitz and planned to buy a farm in New Jersey and start an agricultural colony for Yiddish speakers there. He was an Yiddish linguist and the editor of the Afn Shvel magazine. But when he realized that his dream was not about to be fulfilled, he started teaching Yiddish at Columbia University and dedicated his life to teaching."

Every summer, the farmers leave the commotion of the city and gather together. In the morning, they wake up to the sound of the cock crowing. Then some of them work in the kitchen and the others go out to the fields, and after getting organized and having a light breakfast, they enter class. The timetable is strict. They observe Shabbat and sing the prayers – all in Yiddish. If you address them in English, they won't answer.

The farm not only connects these young people to tradition. It's an active farm for all intents and purposes. They sell the crops they grow, and live off the profit on a daily basis.

"All the Yiddish programs which exist today are defined within classrooms, and it's not something you live," Ejdelman explains. "Yiddish was always used in life. It's not good for a language to be defined in classrooms. I think it's much more significant to learn a language you can really use."

Do you also have people who didn’t come from the world of Yiddish?

"Sometimes non-Jewish people arrive. It's much more difficult of course, because we are traditional and if you take one of the blessings, like "Baruch shelo asani goy" (Blessed be He for not making me a gentile) for example, it creates unpleasantness.

"But Yiddish attracts others because it's very important in understanding Jewish history. In fact, not knowing the language means you are ignoring a wide spectrum of literary texts and plays written by Jews from Western and Eastern Europe for centuries."

In Israel, people are deterred by the language because of the connection to haredim.

"It's true that more Orthodox people speak the language, but that doesn’t mean it's all religious. Today, of course, most of the things published in Yiddish come from the religious world. But historically, the Yiddish texts are not religious; the literature, the theater, the newspapers – they were all completely secular.

"My family is Modern Orthodox, but they are first of all Yiddish. In addition to my grandfather who was an Yiddish teacher, my uncle is an Yiddish musician, my mother was a journalist in the Yiddish daily Froward and many others were active.

"Not all my family is religious, but Yiddish doesn't only have to do with haredim. People usually identify a connection to the Jewish sources through Israel or religion itself. Our farm offers something else, a connection which is deeply rooted in the tradition and culture."

Yiddish has been thriving in the past few years. Many young people, especially in the United States, are showing an interest in the Diaspora language. It's no longer just an esoteric trend for fans of Jewish American author Isaac Bashevis Singer, or for those who heard humorous expressions like "Mensch tracht, und Gott lacht" (men plan and God laughs) in their grandmother's home.

Alongside student-filled classes and artists like Matan Hermoni, who write Yiddish in Hebrew, more and more young people are discovering the magic in the special language, which was the subject of ridicule in the first years after the State of Israel's establishment. Even I, a person from an Iraqi family with no family-historic connection to the language, spent weeks in the "zumer kurs" (summer course) studying this fascinating language.

Unlike Ejdelman, who grew up with Yiddish sizzling around him his entire life, 26-year-old Sandy Fox, a PhD candidate at New York University, arrived at the farm to explore the history of the US Jewry. Fox applied for different programs teaching the Yiddish language, but became fluent in the language only after she began living in the farm where one is only permitted to speak Yiddish.

"Only two people live on the farm the entire year," says Fox," but we continue to meet from September to May in New York. We only speak Yiddish, celebrate Shabbat eves, go to parties.

"I never expected to become part of an Yiddish farm, but here I am, two years later, speaking only Yiddish. Most of the people who come to the farm speak English and many are also fluent in Hebrew. We don’t need to Yiddish to communicate. If a language doest serve is for anything practical, why learn it? Yiddish has been dying for a long time now – first by the Nazis and then by the people themselves with the Zionist ideology. We speak Yiddish in 2015 because it's a beautiful language which connects us to our history, to our roots and to our culture and literature."

Fox explains that the farm is like a separate universe. The conditions are not as comfortable as home in New York, but the love for the language is like any other love which makes a person act irrationally. Yet Jews spoke so many languages during thousands of years of exile, so there is no reason to cut this richness of the past down to one language or two.

"Israelis can be asked the same thing: Why speak Hebrew in 2015? Why everyone speaks English in Israel, and it would definitely be more sensible from a global-economic perspective. But if the entire world speaks only English, so much beauty will disappear from the rich culture. In general, as far as I'm concerned, the Yiddish language cannot be separated from the Yiddishkeit (the Yiddish culture), and so the farm is the place where these two things meet."

Would you define yourself as Americans or Jews?

"We are totally part of the United States, but we are also slightly separated," says Ejdelman. "We have always felt more like Jews who live in New York City. We go to our own schools, speak our language and celebrate our holidays. But we also love baseball."

Is it still painful thinking about Yiddish' rich past before World War II?

"It's undoubtedly painful, but I take comfort in the fact that Yiddish is not going anywhere in the near future. What will come out of this huge mass of Yiddish-speaking followers? They may produce a new large Yiddish culture, which will serve as a bridge between the Yiddish academic world and the Hasidic culture that will revive this culture. Who knows what will come? It might happen again. Not like it was in the past, but in some form."

And is the US the place for such a revival?

"That's very possible. It's very easy being Jewish here. I am obviously happy to be a Jews who is not persecuted or oppressed. My generation in New York is not afraid of anti-Semitism. It's no longer the generation of my father who grew up in Poland."

To contact Yiddish Farm, write to Naftali Ejdelman at: naftali@yiddishfarm.org .