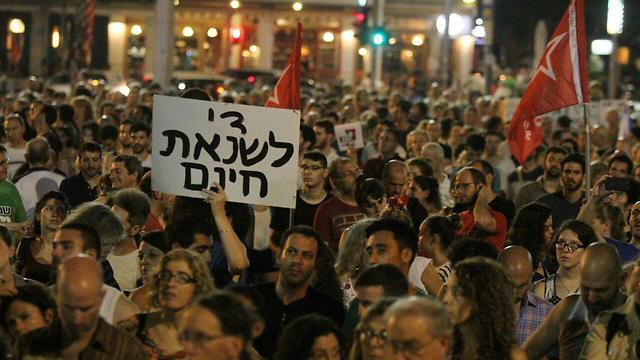 Anti-violence rallies throughout Israel after acts of nationalist, homophobic terrorism

Following two blood-soaked days, in which a Palestinian infant was killed and his parents and sibling were critically wounded in a fire and six people were hurt in a stabbing at Jerusalem's gay pride parade, thousands are expected to protest in Tel Aviv, Jerusalem, and Haifa; President Rivlin, party chairpersons, and religious leaders to condemn violence.

Several anti-violence demonstrations were being held throughout Israel on Saturday night, with Israelis crying out for justice in the wake of two shocking incidents of violence over the past few days.

LGBTQ rights groups and youth activists were holding demonstrations in Tel Aviv, Jerusalem, and Haifa following the terror attack at the gay pride parade in the capital on Thursday, in which six people were wounded. Demonstrations were also being held in response to the Jewish terror attack late Thursday night that killed a Palestinian infant and critically wounded the other three members of his immediate family.

"I have come here today, like you, with a heavy and pained heart," Herzog said at the rally. The Zionist Union chairman said he prayed for the wounded to recover. "Terrorists are terrorists, period. Whether Jewish terrorists or Muslim. The Jewish people are ashamed of the deeds committed by members of our people and we ask for forgiveness in Israel and in the world… At this difficult moment, I extend my hand to the Palestinian people and its leaders."

"What we have seen in recent days, both the stabbing of the marchers at the pride parade and the arson terror attack in Duma, can be called by its name – it's Jewish terrorism, it's Jewish ISIS," said Galon.

Nasser Dawabsheh, the brother of the infant's father, gave an emotional speech. "They burned a family that slept peacefully, that doesn’t' believe in violence," he said.

"Every morning I discover new horrors committed by vile people, and all in the name of God, in the name of their people, in the name of their country," said Peretz. "I saw that their people are not my people, their country is not my country, and their God is not my God." Peretz hinted that leaders on the right bear a certain responsibility for the violence: "That's how extremists interpret the call to bulldoze the Supreme Court; that's how nationalists interpret statements by ministers who undermine the rule of law."

After the speeches ended at Rabin Square, the demonstrators started marching towards the LGBT solidarity rally in Meir Park.

Thousands attended the rally in Meir Park in Tel Aviv in solidarity with the LGBT community, which also marks six years since the killing spree at the Barnoar community center.

"I cannot believe we have reached such an abyss," said Peres. "I took before this stage six years ago, mere days after the murders at Barnoar. I am finding it difficult to believe that we are standing on that same stage, once again before the same phenomenon. We have gathered this evening for a war of independence – Israel's independence from insanity and insane people. This is not a disagreement between right and left. This is a profound clash between those with a conscience and those who lack a conscience."

"It is appropriate on this evening to remove the masks," continued the former president. "Anyone who calls the pride parade a 'beast parade' should not be surprised when a knife is raised at a 16-year-old old girl. Anyone who incites against Israel's Arab citizens should not be surprised that churches and mosques are set on fire, and that ultimately a baby is burned alive in the middle of the night. We can compromise politically in a democratic country, but we must not compromise morally."

Prime Minister Benjamin Netanyahu delivered a speech in a prerecorded video, saying that the teen who was critically wounded at the pride parade is a student at the high school attended by himself and his children. "This was an attack on all of our children," said Netanyahu, "and two days ago, possessed by an insane and murderous zeal, a criminal came to murder her and others. And no less horrible – there are those who hope she dies. We reject this hatred out of hand. We will also do what is required to learn the lessons, but the most important lesson is acceptance of the other, even when he is not like you… What happened in Jerusalem goes against the spirit of our people."

Zionist Union Chairman Isaac Herzog also spoke to the crowd. "The gay community's struggle is among the most just, worthy, and right of all, because it is a struggle over fights for the human beings living in Israel," said Herzog. "Don't let murderers and lowly terrorists defeat you. We are with you, marching with you in this long journey to recognition, equality, and full rights."

Some 200 people gathered in Be'er Sheva as well for a protest rally.

Calls on Netanyahu to resign in Haifa

In Haifa, some 500 people were participating in a protest "against the crimes of the occupation" at Ben Gurion Boulvard.

Among the signs at the Haifa rally were: "Legislate against hate crimes," "State-funded terrorism," "Homophobia and racism is the same kind of violence." Some protesters arrived with Palestinian flags and signs calling: "End the occupation."

Protesters called out: "Bibi, resign, because our blood matters," "Gays and lesbians want to live in Haifa and the Krayot," "The homophobia begins in the government's halls."

Haifa Mayor Yona Yahav, who attended the rally, said: "I came to show my solidarity. Like everyone, I too was shocked by the attack. I believe in Haifa, there is tolerance for everyone and this kind of attack can't happen, but we need to uproot the hate all over the country."

"On the eve of the 15th of the month of Av, the Jewish festival of love, six Israeli citizens were cruelly stabbed, in the heart of Jerusalem," the president said. "To my great horror and shame, the letting of blood, the path of hatred and murder, did not stop there. Over the course of the same night, Jewish terrorists burned down the house of the Dawabsheh family in the village of Duma, killing their baby son Ali."

"On Friday, I visited the family in Tel Hashomer hospital, I visited, silently, ashamed, ridden with dread for the power of hatred. Ashamed that in a country which has known the murder of Shalhevet Pass, of the Fogel family, of Adele Biton, of Eyal, Gil-ad, Naftali and Muhammad Abu Khdeir, there are still those who do not hesitate to ignite the flames, to burn the flesh of a baby, to increase the hatred and terror," Rivlin went on to say.

Protesters in Jerusalem (Photo: Roi Yanovsky)
"In order to put out the flames, we need be a much more determined and decisive. We must be thorough and clear; from the educational system, to those who enforce the law, through to the leadership of the people and the country. We must put out the flames, the incitement, before they destroy us all." Among the protesters in attended were political activists from across the spectrum, including from Meretz, Zionist Union, Yesh Atid and the Likud.

Protesters waved signs saying "Homophobia and racism is the same kind of violence," "Hate kills," and "Love wins," and called out "stop condemning, start changing" and "The answer to Lehava - pride."

Jerusalem will also be the site of a rally by the Open House organization. Some of the wounded in Thursday's attack were members of the organization. The New Spirit organization will hold a rally in support of the LGBT community nearby.