The ink flag being raised in Eilat during the War of Independence
Photo: Micha Perry, IDF Archives Ministry of Defense

The disgraceful link drawn between the Holocaust and the Nakba

Op-ed: The Holocaust and the Nakba were used, by both nations, to create the collective national memory. Except there is an unfathomable difference: The Jews used this collective memory to build, while the Arabs use it to intensify hatred and resentment.

I received a lot of angry messages from Holocaust survivors. Where, one of them asks, did they get the nerve to draw a link between the Holocaust and the Nakba? The institute claims they don't mean to draw a comparison, I tried to explain to him. What they mean is that among both nations, these are seminal events that affected their respective identities. The book has articles, I added, that actually emphasize the difference. He wasn't convinced. Truthfully, neither was I.

For many years now that there are those among us who try to minimize the Holocaust. One professor even sought to erase it from memory. The idea is that a conversation based on victimhood leads to hatred between the nations, chauvinism, nationalism and even fascism. But the Nakba? These same people claim that the Nakba, precisely the Nakba, needs to be fostered and elevate. They want there to be more and more focus on the Nakba, so we could understand the catastrophe experienced by the other side. Those who opposed conversations based on victimhood are suddenly the greatest supporters of such a point of view.

Not all of the articles in the book are part of this industry of nonsense. But the very fact the Holocaust and Nakba are tied together attests that the book is either a mistake, or madness. After all, those representatives of the forces of progress, and the Van Leer Institute, did not write a book nor did they hold an event about the Jewish Nakba - the pogroms and the expulsion of hundreds of thousands of Jews from Arab countries. And they didn't write a book nor did they hold an event about the part Mufti Haj Amin al-Husseini played in encouraging the Jewish extermination enterprise. And there is no chance that the Nakba aficionados will tell their students, or publish articles, about the fact that in those years, population transfers were the norm, and that this was an experience shared by tens of millions of people. None of them is a refugee today. Except the Palestinians. It won't happen, because in some parts of Israeli academia, the Nakba has turned into the hegemonic school of thought. 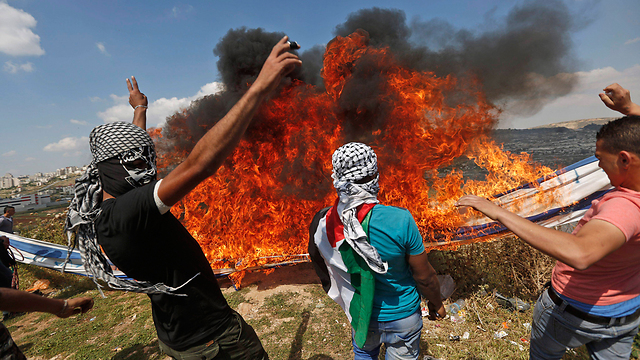 The Arabs use the memory of the Nakba to intensify hatred and vengefulness (Photo: EPA)
The Nakba is a fact. We can and should share in the pain of those who are suffering. The thing is, that unlike the tens of millions who have also experienced expulsion, the Arabs used the Nakba for only one purpose: Fighting against Israel. In 1949, Egyptian foreign minister Muhammad Salah al-Din Bey clarified that: "It is well-known and understood that the Arabs, in demanding the return of the refugees to Palestine, mean their return as masters of the Homeland… they mean the liquidation of the State of Israel." In 1959, the Arab League clarified that "The Arab countries will not grant citizenship to applicants of Palestinian origin in order to prevent their assimilation into the host countries." In 1960, Egyptian president Gamal Abdel Nasser clarified that "If the refugees return to Israel – Israel will cease to exist." And Arafat's aide, Sakher Habash, clarified to Palestinian youth that "to us, the refugees issue is the winning card which means the end of the Israeli state." And nowadays, the "right of return" is the banner of the BDS movement, which rejects any agreement with Israel. We could go on. There's more. The glorification of the Nakba in a book that ties it together with the Holocaust is enough to demonstrate that point. Every now and again, the representatives of the Nakba school of thought try to market the claim that there is a need to recognize the Nakba in order to achieve reconciliation and understanding. Reconciliation is important, but the consciousness of the Nakba does the exact opposite of that. Peace can only be achieved when the Arab side as a whole, and the Palestinians specifically, recognize their responsibility, their intransigence, the fact their leadership declared war and talked about eradication. No change can come without them looking inwards at the fact they rejected any partition plan, and the fact they could have formed a state between the years 1949-1967, before there was an occupation. But they didn't want a state. They didn't want to do anything for themselves. They wanted to perpetuate the problem. But that isn't happening. Both because the Nakba school of thought encourages victimization, legitimizes any lie under the auspices of the "Palestinian narrative," and promotes the "right of return" fantasy.

One of the writers is author Salman Natur, who presents a "narrative" made entirely of self-deception. It's fortunate, he writes, that the Nazis were stopped in El Alamein, because they could've brought "disaster upon the Arab world." I'm sorry, but the Nazis controlled a part of the Arab world - North Africa. They didn't persecute Muslims. They persecuted Jews. Indeed, in 1941, the Arabs carried out, encouraged by the mufti and Nazism, the "Farhud" pogrom against the Jews in Baghdad. And pro-Nazi rallies were held all across the Arab world with the hope that Rommel wins. At the time, Hitler was referred to with admiration as "Abu Ali," and the greeting "Heil Rommel" was heard. Indeed, Arabs who opposed the mufti planned to escape, because it was clear to them that the Nazi mufti would eliminate them as well. And indeed, Nazi criminals found asylum in Egypt and Jordan. But Natur is marketing a "narrative," not history. With academic sponsorship.

Natur has been dedicating all of his energy to promote the "right of return" for many years now. Just like the BDS movement. Not self-definition. Not peace. Not two states. Just the Nakba, refugees, and the right of return, all wrapped up in cellophane of equal rights. It doesn't work anywhere in the Arab world, but delusions are exempt from dealing with facts. And mostly, unlike the lie diligently-nurtured by the Nakba school of thought, there is no "right of return" in the law of nations. And thanks to all of those who worked hard - academics, the Van Leer Institute, and the Kibbutz Meuhad publishing house. This way, we won't have reconciliation. But we will get another edition of the demand to turn Israel into Iraq or Syria, thanks to the "right of return." The Holocaust-Nakba project is funded by, among others, the Heinrich Böll Foundation, which is affiliated with the German Green Party. This money reeks. Because the German foundation would not dare fund an event about the German Nakba and the Palestinian Nakba. After all, the Arab leadership - and not just the mufti - caught the bug of aspirations to exterminate. After all, the Germans, like the Arabs, were the aggressive side. After all, it ended in defeat - meaning a Nakba - for both of them. As a result of this defeat, 12-16 million Germans, most of whom weren't even Nazis, were expelled from central European countries. So why is it that there's no chance that the German foundation or academia promote a research project about the similarities between the German Nakba and the Arab Nakba, but will promote a project drawing a link between the Holocaust and the Nakba? Because the "forces of progress" won't allow the truth even a peep. The false perception wins and oppresses.

There is one thing, we must admit, that the event's organizers are right about. The Holocaust and the Nakba played a part, for both nations, in creating the collective national memory. Except there is an unfathomable difference: For the Jews, this collective memory was used to build. For the Arabs, this collective memory was used, and is still being used, to intensify hatred and resentment. The Jews didn't form dozens of terror organizations to eradicate the German entity, and there was no justification of terrorism. For the Arabs, the Nakba was and remains the main engine of the terror industry and serves to perpetuate the refugee problem. The Arab world has an immense fortune. Not one dollar was used for rehabilitation. Tens of millions of dollars were used to fund the terror and destruction industry. But the academic school of thought that links the Holocaust and the Nakba won't deal with these issues. No chance.

At the end of the previous school year, I was lecturing at Ben Gurion University about these issues, among other things. "Something here doesn't make sense to me," a student told me. "Everything you are saying is the complete opposite of what I studied." We must not make generalizations. Not all lecturers and not all departments are part of the Nakba school of thought. But the student is right. Many students are brainwashed. Academic freedom has been defeated. The hegemonic oppression won. And if we needed any more proof of that – we have the book and the event.