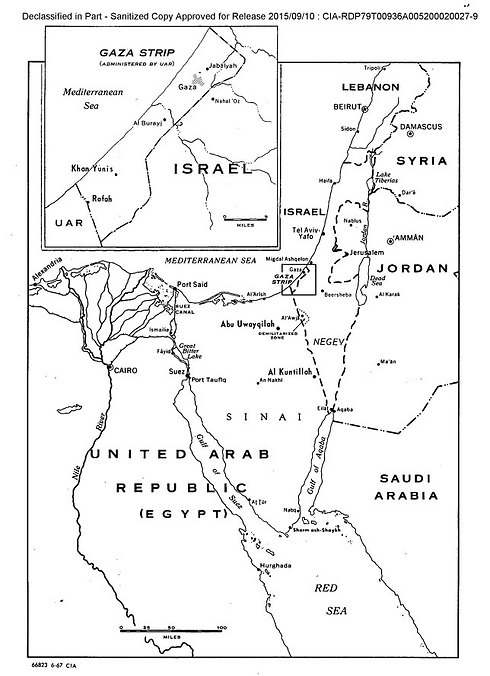 "Since early this morning, fierce fighting is taking place between Egyptian armored forces moving towards Israel and our forces who have set out to stop them." This was an IDF spokesman’s announcement at the opening of the Six-Day War.

Now, almost 50 years after the war, CIA documents showing what initial information the US received on the war were revealed for the first time.

The CIA published about 2,500 classified documents, dating from the time of Presidents John Kennedy and Lyndon Johnson in the sixties. The documents describe among other things the development of the Vietnam War and the response to the Cuban missile as well as the Six Day War, from the American point of view.

On June 5, the opening day of the war, a daily briefing was transferred that was classified as "top secret." It reads as follows: "Hostilities began early this morning. Both sides report heavy fighting in the air and between armored forces along the Israeli border with Egypt. Israeli planes raided airfields in Cairo and other areas beginning at about 8am local time (2am Washington time).

"Cairo has just been informed that at least five of its airfields in Sinai and the Canal area have suddenly become 'unserviceable.' Israel's war plans had put high priority on quick action against the Egyptian Air Force because of the

threat to its own more vulnerable airfields and vital centers.

"Reports are still fragmentary, but the signs point to this as an Israeli initiative. Over the weekend it became

apparent that Israeli leaders were becoming increasingly convinced that time was running against them.

A day later the Americans updated the situation on the battlefield. “Cairo may be preparing to launch a campaign urging strikes against US interests in the Arab world. Both Egyptian and Syrian domestic broadcasts this morning called on the 'Arab masses' to destroy all US and 'imperialist' interests in the 'Arab homeland.'

"Last night Cairo radio claimed it had proof of US and British participation in the 'aggression'. Demonstrations have now taken place against US embassies and installations all over the Arab world. Arab oil-producing countries, meeting

in Baghdad, say they will stop selling oil to any country which takes part in, or supports Israel in the fighting.

Baghdad radio said this morning that the pumping of Iraqi oil has been stopped 'because of US and UK attitudes.'

"In the fighting, Israel has gained an early and perhaps overwhelming victory in the air, but the progress of the war on the

ground is unclear. If Israeli claims regarding damage to Arab combat aircraft are valid, they have destroyed the entire Jordanian inventory of 21, two thirds of the Syrian inventory of 69, and 250 of some 430 Egyptian planes. Arab counterclaims of 158 Israeli planes destroyed seem grossly exaggerated, but actual losses to the Israeli force of

about 270 aircraft are not known.

"Firm information on ground action remains sparse. The Israelis claim they have captured the 'outer positions' of Kuntilla

in southeastern Sinai and reached the outskirts of al-Arish in northern Sinai. In Jordan, King Hussein said this morning that Israel is pushing ahead in a 'punitive fashion'. He ended with a plea that the US intercede.