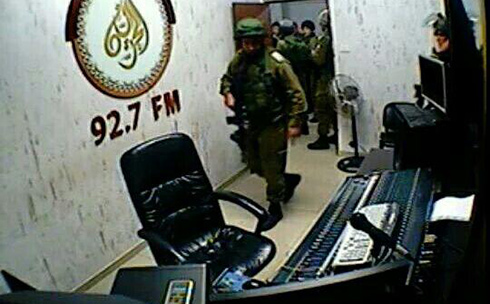 IDF forces raid the highly popular Al Hurriya radio station in Hebron overnight, issuing a six-month closure order for the station, which according to the military - incites Palestinians to violence.

IDF forces raided the offices and studio of the Al-Hurriya radio station  in Hebron Tuesday night, confiscating the station's technical equipment and transmitters in order to prevent its operation. The IDF also issued a six-month closure order during which it will be prohibited from broadcasting.

Al-Hurriya is a popular radio station in Hebron with a strong following. The IDF stated that the station had broadcast vicious incitement against Israel, encouraged stabbing attacks, and supported violent resistance. In the past month, 29 attacks originated in the Hebron area, of which 22 were stabbing attacks. The terrorist who carried out the attack on Tuesday in Rishon Lezion -  which left two people seriously wounded, was identified as Imad al-Tarde, a 19-year-old from Kfar Tapuach near Hebron.

The station was established in 2002 in the Gaza Strip and moved to Hebron in the wake of the Hamas takeover of Gaza. The station was shut down twice, in 2002 and in 2008. Among other things, the station published false claims about the execution of the Palestinians, and the abduction of Palestinian youths by Israeli security forces. The station also praised the families of terrorists after their children had been killed while conducting attacks.

Concurrently, the IDF and the intelligence division of the Hebron police department entered the village of Yatta on Tuesday night and carried out a search in an abandoned house where weapons had been concealed. An M-16 rifle, a pistol and 13 cartridges were discovered. Police had stated that a suspect would be arrested in connection with the find.

Meanwhile, Joseph's Tomb, which was torched two weeks ago was renovated on Tuesday night and a new tombstone was erected. Painters, locksmiths, stone and marble workers, electricians, landscapers and cleaners worked together and finished the job within five hours.

The head of the Samaria Regional Council, Yossi Dagan, who initiated the repair, said: "There is nothing more Israeli than concern for our holy places, standing up for our rights. This corrects to a small degree the shame and horrible damage of the Palestinian Authority and its members barbarism who violated such a holy place for the Jews