Samir Kuntar. A small fry in the regional sea of terror
Photo: AP 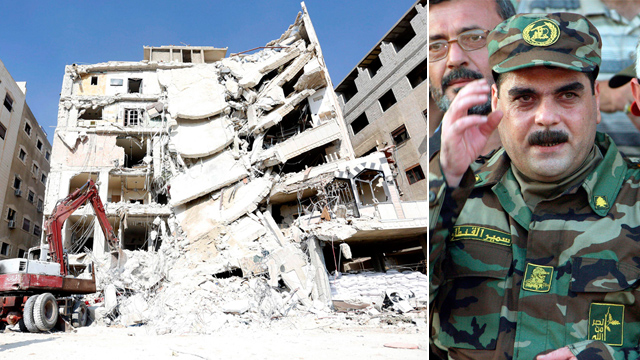 The ball is now in Hezbollah's court

Analysis: Were the rockets fired at Israel on Sunday a symbolic response to Samir Kuntar's assassination or do they mark the start of another violent conflict on the northern border? The fact that both Hezbollah and the Assad regime disagreed with Kuntar's activity in Syria could serve as a restraining factor.

What happened Saturday night was either a necessary thwarting of a ticking bomb, or a calculated risk taken by someone who was wrong.

We will receive the answer in the coming days, perhaps even in the coming hours. Only then we will know whether the rockets fired at the western Galilee on Sunday, likely by a Palestinian organization, were a symbolic response in order to fulfill one's obligation, or whether they mark the beginning of another violent conflict on the northern border.

In January 2015, following the assassination of Jihad Mughniyeh and an Iranian general in the Golan Heights, we were very close to a military conflict on the northern front. After a short round of blood, in which two IDF soldiers were killed, both Israel and Hezbollah held their tongue, and the interests curbed an ongoing deterioration. Is this what will happen this time too? In any event, the Northern Command has been on a heightened state of alert for two days now.

It's reasonable to assume that, as we speak, the Hezbollah top brass is evaluating the situation in regards to its future conduct. Hezbollah is also affected by street pressures, and the events during Samir Kuntar's funeral, which will be held in Beirut on Monday, could have ramifications which will cause the border to heat up.

Kuntar and the building he was assassinated in. Meticulous work by a very professional intelligence (Photo: EPA)

Kuntar - with all the symbolism and negative feelings behind this murderer's name - is no Imad Mughniyah. While he has been defined by the American administration as an international terrorist, compared to the Hezbollah "chief of staff" who was assassinated in Damascus in 2008, he is a small fry in the regional sea of terror.

There had to be a pretty exceptional reason for someone to take the risk, waste the credit they were given to operate in Syria and carry out a targeted assassination of this man in the Damascus suburbs. The only reason that could justify his assassination in the Syrian capital - which is protected by the Russian air defense umbrella with its S-400 missiles and detection radar that covers large parts of the State of Israel - is "concrete solid" intelligence information about a terror attack which is about to be executed immediately.

In a sane security policy, revenge is not an acceptable reason for Kuntar's assassination. If Israel wanted to assassinate Kuntar in order to take revenge, in order to signal to the Iranians and to Hezbollah or in order to convey to security prisoners the message that returning to terror after being released in a prisoner exchange deal will claim a deadly price - it had dozens of opportunities to do so since he was released from Israeli prison in 2008.

Whether Israel is behind the assassination or not, the defense minister must ask his intelligence people before every operation in Syria whether it crosses Hezbollah's red lines and would require the organization to respond, possibly leading to a deterioration on the northern front. This is a key question, as the Israeli interest is that Hezbollah will keep bleeding in Syria for many years and grow weaker without any Israeli involvement.

Hezbollah's conduct up to now reveals that as long as the organization's weapons are being targeted on Syrian soil, it is accepting these attacks as part of the rules of the game. On the other hand, when Jihad Mughniyeh was assassinated, we almost got caught in a military conflict in the north.

Kuntar's status in Hezbollah, however, is entirely different. While he has become a symbol of the ongoing struggle of security prisoners released from Israeli jail, a sort of popular hero, Hezbollah stopped protecting him about a year ago. Nonetheless, Kuntar continued his activity independently under the guidance of Revolutionary Guards officers in Damascus.

But Hezbollah is not the only one who turned its back on Kuntar. The Damascus regime saw his ongoing activity in Syria as a danger to President Bashar Assad's interests, as it may have dragged Israel into a direct conflict against Syria. The fact that both the Syrians and Hezbollah disagreed with Kuntar's activity could serve as a restraining factor today.

The Russian presence in Syria can also be seen as a restraining factor, which may cause Hezbollah to moderate its response. Entering a conflict with Israel doesn’t serve the Russian interest in Syria. If Kuntar was indeed assassinated by Israel, as the Syrians and Lebanese claim, then the Russians - thanks to their technological abilities - were aware of this operation in real time. And the fact is that Moscow is keeping quiet, just like it ignored three similar incidents of attacks in Syria which were attributed to Israel.

Samir Kuntar was apparently under extremely tight surveillance, otherwise his targeted assassination could not have been carried out with such impressive success. Such information, which makes it possible to find his exact location and fire missiles towards him when there are no innocent civilians around, wasn't generated by chance. It's part of the meticulous work of a very professional intelligence.

Kuntar was assassinated in a Damascus building which served, according to Syrian reports, not just as his people's residence but also as his organization's operations center. According to those reports, that was the location of the meeting room in which Kuntar, his spokesperson and driver were killed and several other people, likely organization members, were wounded. It seemed like a golden opportunity: Dealing Samir Kuntar's organization a deathblow. Now, the ball is in Hezbollah's court.